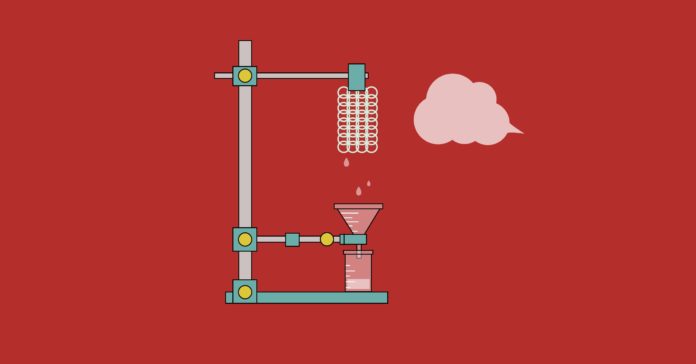 Devices exist that can pull that water out of the air and convert it into liquid, but they are bulky and use a lot of energy. A pair of studies out today in Science Advances, however, describe clever technologies that could suck water right out of the air, one using zero energy and the other using very little. The techniques won’t quench the collective thirst of humanity, but they’ve got serious potential to help us augment water supplies in particularly dry places, especially as climate change wreaks its havoc.

The first technology isn’t a new concept, but a supercharged version of of an old one: fog collection. Fog is just a cloud of tiny, innumerable droplets of water. Collect enough of those droplets and you can get yourself a glass of water. In Chile, for instance, fine nets capture fog and funnel it into pipes for drinking and even beer-making.

Great, but not as great as it could be. “The efficiency of these sort of passive fog collectors is on the order of anywhere between 1 and 2 percent, it’s extremely poor,” says MIT mechanical engineer Kripa Varanasi, coauthor of one of the new papers. When foggy wind passes through your typical netting, most of it flows through the holes between the strands. That means it takes a long time for enough water droplets to smack into the strands and accumulate there. So just make a finer net, right? Nope—the wind just tries to go around it.

What you really want is for the water droplets to be attracted to the mesh. To do that, Varanasi turned to electric fields. In the lab, he propelled a stream of fog through an ion emitter, which in this case produces charged air atoms. “As these ions are moving forward, they get intercepted by the droplets, and the droplets get charged,” Varanasi says.

These ionized droplets are positively ga-ga for the mesh collector. Take a look at the GIF below. It starts off with fog flowing like normal, but once the ion emitter switches on, the fog can’t escape the collector. The effect is so powerful, water droplets that do make it through the mesh then make a U-turn and come right back for it, resulting in an efficiency of 99 percent. The trapped fog then drips as liquid water into a glass below.

Are you listening, San Francisco? Theoretically, any region with a healthy supply of fog could deploy nets and ion emitters, which may run at high voltage but actually draw a small current. In the lab, the system operates at 60 watts per square meter of mesh. Compare that to another technology used in thirsty places like India: “air water generators,” which act like refrigerators to cool the air and allow it to condense, but at considerable energetic cost.

So the ionization works, but you can’t just deploy it willy-nilly wherever there might be a little bit of fog. You’d want a lot of the stuff, and you’d want the system to know when’s best to switch on. “What you’d really need to turn this into a viable water supply is to have a good sense of when the fog is present,” says chemical engineer Greg Peters, who studies air water generation techniques. “If it’s just going to sit there being struck by lightning on a hilltop for half the year, then that’s a lot of sunk costs.”

The technology could even make its way into power plants, specifically cooling towers, which spew water vapor. It takes a lot of water to cool these things. Like, 39 percent of total freshwater withdrawals in the United States are earmarked for power plants. Over the course of a year, one facility can use as much water as 100,000 people. “We can capture the plumes and collect that water,” Varanasi says, something no other technology can do.

To use this technology to collect natural fog, though, you need natural fog, which deserts don’t really have much of. That’s where our second new technology comes in. Researchers at UC Berkeley have developed what is essentially a water battery: It charges at night and drains during the day.

The water battery is based on a material known as a metal-organic framework. The metal being zirconium and the organic bit being carbon atoms. Combined, the two substances form a powder—a framework with lots of space inside. A very fancy sponge, more or less.

“If you expose this material to humid air, the framework will get saturated with water molecules,” says chemist Eugene Kapustin, coauthor on the paper. “And then, because the water molecules don’t stick too tightly to the interior of the framework, we can release this water by heating the powder.”

The researchers took this metal-organic framework and spread it on top of a box. They then put this box inside another clear box with a lid. At night, they keep the lid open, letting air in. This air is relatively humid compared to the day. “During the day we simply close the lid of the outer box and expose it to sunlight,” Kapustin says. This heats the material and releases the water as vapor. “After 5 hours, at the bottom of the outer box we can see liquid water as it condenses on the walls and flows down.”

Sure, it doesn’t produce a tremendous amount of water at the moment: 7 ounces for every 2 pounds of metal-organic framework. But the researchers are testing an aluminum-based version of the material that is cheaper and twice as efficient. Scale up your box and add more of the metal-organic framework, and you collect even more water.

Also, the water battery can withstand at least 150 cycles without any degradation. “We analyzed the purity of the collected water, and we didn’t see any organic parts or inorganic parts,” Kapustin says. “So this tells us that the material is stable, and also we see that the performance of our device doesn’t decrease over time.”

Plus, the beauty of this system is its passivity—it uses only the power of the sun. And it works out in the wild, too—in tests in Arizona, the researchers got the thing to collect water even though humidity during the day dropped to 8 percent.

No, technologies like these won’t quench the world’s thirst. But they could help water-strapped areas follow perhaps the most important water rule of all: diversify your sources. Rely solely on infrastructure that pipes in faraway rainfall and you’re asking for trouble. Technologies like metal-organic frameworks and ionized fog collection won’t work everywhere, but one day they could help humanity avoid withering on the vine.