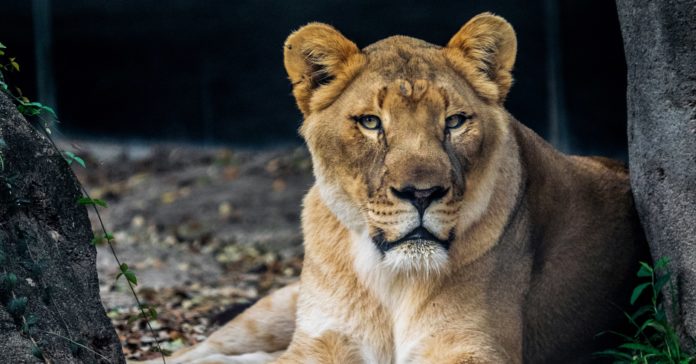 Apparently you can battle a lion at the San Antonio Zoo. OK, it’s not that kind of battle—it’s a tug of war battle. There is a thick rope passing through a hole. On one end, there is a lion cub. On the other end of the rope there could be three professional WWE wrestlers. Who wins? Well, the wrestlers don’t win. But there is also some physics here.

It’s all about friction

A typical tug of war isn’t really about strength—it’s about friction. It doesn’t matter how strong you are if you don’t have enough friction to keep yourself from sliding. Let me show you. Here is a force diagram for two people in a tug of war.

Each puller (person pulling on the rope) has essentially four forces acting on them. There is the downward weight which is balanced by the upward push of the ground. Since the person pulls on the rope, the rope pulls on the person in the opposite direction (this because of the two-ended nature of forces). Finally, there is the frictional force between the person and the ground. If no one is “winning,” all these forces add up to zero and the person stays at rest. In order to start moving in the winning direction, the frictional force must be greater than the force from the rope.

This “two-ended” nature of forces means that forces come in pairs and are an interaction between two objects. It doesn’t matter how hard the person on the left pulls on the rope, this same rope pulls on that person. So if you were to increase your pull to 1,000 Newtons—that same rope pulls on both people. So the key is the other force acting in the horizontal direction: friction.

The maximum frictional force depends on two things. It depends on the types of surfaces interacting (maybe it’s the rubber on a shoe interacting with a concrete floor) where some surfaces just have more friction than others. You really can’t change this part in a tug of war. The friction force also depends on the normal force. The normal force is the force with which the two surfaces are pushed together. In the case of this simple tug of war above, the ground pushes up with a force equal to the gravitational weight of the person. This means that heavier people will have a greater frictional force acting to help win a tug of war.

Oh, note that in the human vs. lion tug of war the humans are on a different surface than the lion. Who has the advantage? It’s probably the lion since she could have uneven ground that would allow her to use more than just plain old sliding friction.

So, it’s really about mass

If you have two contestants on equal ground with similar friction materials, mass matters. If the person on the left has half the mass of the person on the right, they will have half the friction. This means that it’s pretty tough to beat a heavier puller.

What about the lion? This looks like a young lion—she could have a mass of about 120 kg (up to maybe 182 kg). A typical massive human wrestler might have a mass of around 90 to 100 kg. Three humans will probably have more mass than a single female lion. Probably. The humans should have an advantage in the mass.

Wait! This isn’t a normal tug of war. The rope isn’t straight. Did you notice that? This can make a big difference in that it can add another frictional force into play. Let me show you how this works with a diagram of the rope as seen from the top where it passes through the glass.

That little yellow dot is just part of the rope. If the rope is at rest, then the forces on this part of the rope must add up to zero (which I have drawn to the side). And here is the key: The pull from the humans and the pull from the lion aren’t in opposite directions. There is no way these two forces can add up to zero. The wall has to also push on the rope (to the up and to the right as seen in the diagram). This wall force is a normal force—yes, that same kind of normal force that can produce friction.

But which way does the frictional force act? If friction had emotions (which it doesn’t—it’s just a force), it would want to remain calm. Friction acts in a direction to prevent the two surfaces from sliding. If the humans pull harder than the lion, the lion will get the benefit of friction so that the rope doesn’t slide towards the humans. However, if the lion pulled hard the frictional force would switch sides.

So, who has the advantage with friction? The advantage goes to the loser (probably the lion).

If you want a real fair match between humans and a lion then you have to a straight rope. It would also be best to put some tennis shoes on the lion and have her on cement.

Are Diplomas in Your DNA?

GizmoCrazed - August 4, 2018 0
Last week, scientists published the biggest-ever study of the genetic influence on educational attainment. By analyzing the DNA of 1.1 million people, the international...

What Soldiers Look Like Before, During And After War [PHOTOS]