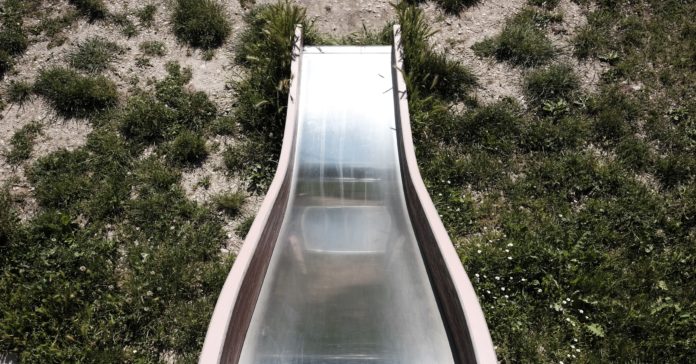 Why would you build a slide like this? It’s really long and it’s really straight. When humans get to the end, they can’t stop. I don’t know what the designer was thinking—maybe the intent was to build a slide that would produce excellent videos of people crashing at the end. If so, well done designer. Well done.

Now for a physics analysis. That’s what I do. I will start with some questions and answers.

How fast are they going at the end?

Since I’m not actually at the location of this epic slide, the best I can do is to use the video to estimate the slider speed. For this example, I am going to load the video into Tracker Video Analysis to plot the motion of a human in each frame of the video (yes, there are some tricks to getting this to work—[but I will skip those for now]). In the end, I get the following plot of position vs. time for the human. I had to guess at the scale of the slide, so this doesn’t tell the whole story.

OK, that’s a plot of position vs. time and not a plot of velocity vs. time. Don’t worry, we can use this to find the speed at the end. The key is to fit a quadratic equation to the data. The mere fact that a quadratic equation makes a reasonable fit means that the human is accelerating the whole time. This shows that a longer slide will give that human an even longer time to increase speed (for an even crazier crash at the end). So, from the plot (and my estimation of scale) I get an acceleration of 3.58 m/s2 and a final speed of 6.39 m/s (14.3 mph). Yes, that’s fast.

Why can’t they stop?

It’s all about friction. Once the human leaves the slide and gets on level ground, there needs to be a backwards pushing force to decrease the speed. This backward pushing force comes from friction between the human and the ground. And yes, the friction does indeed slow them down. However, it’s not enough. Since they are moving so fast, it’s going to take a much greater distance over which to slow down. And in this case, they run out of room—I guess that makes it funny. Also, this is why you need to drive slower on icy roads—it takes longer to stop.

But how much space would you need to stop (assuming my speed calculation is accurate). Let me start with a force diagram of a human traveling on level ground with friction.

I put a dash-arrow on top to show the way the human is moving—but remember, this is not a force. The force is the frictional force. In this case the magnitude of this frictional force will be equal to some coefficient of friction multiplied by the force the ground pushes up on the human (labeled as N in the diagram). The coefficient of friction is just some value that depends on the two types of materials interacting. In this case, I will just guess some value like 0.3—which isn’t too rough. Since the human is on level ground, the ground pushes up with a force equal to the weight (mg). That means the magnitude of the frictional force will be equal to:

That’s it (yes, I skipped some of the derivations). Using my values for acceleration and starting velocity, I get a stopping distance of 6.9 meters (over 22 feet). Yup. Oh, and you see that since the velocity is squared—increasing the starting speed makes a big difference in the stopping distance.

How could you fix this slide?

There are several things you could change. Let me list them.

Oh, I do have one homework question for you. For normal sized slides, it seems like kids go down them at a constant speed. Is this true? See if you can model the motion of a human on a normal slide. If they do reach some constant speed—is it because of air drag? If so, what would be the “terminal velocity” of a human going down a slide?

SpaceX Sticks Its Landing after a Showy California Launch

GizmoCrazed - October 13, 2018 0
“The Falcon has landed.” As SpaceX declared victory on its live webcast, cheers erupted on a Southern California hilltop, where a group had gathered to...

The Physics of a Star Wars Bomber Dropping Bombs in Space