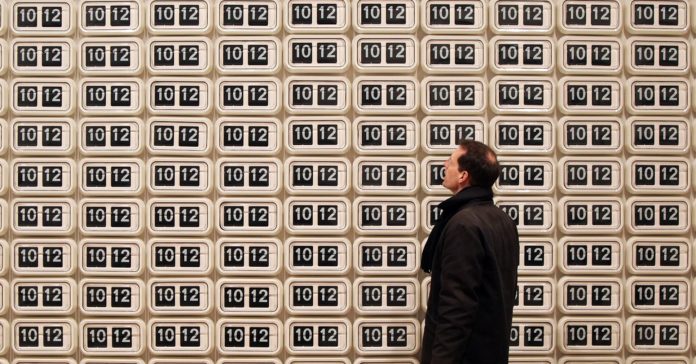 Bijunath Patla’s experiment sounds like a real bore: Gather 12 of the most accurate clocks around the world, and watch them tick. It’s like a physicist’s version of watching paint dry. Patla’s team, based at the National Institute of Standards and Technology in Boulder, Colorado, began monitoring the clocks on November 11, 1999. And they’ve kept watching for some 450 million seconds*—over 14 years.

But their patience paid off. In a paper published in Nature Physics on Monday, Patla’s team reveal a profound result from an exceedingly monotonous experiment. The ticking of the clocks, Patla says, actually illustrates one of the most fundamental principles in the laws of physics: that no time or place in the universe is special. It’s one of the basic ideas in Einstein’s theory of general relativity, a set of rules that correctly describes how the planets orbit the sun and how neutron stars collide to produce gravitational waves. The laws of physics apply in the same way today as they did 4.5 billion years ago when the moon formed, or in 2000 when you were listening to Creed.

The principle seems obvious. Throw a ball today, and it lands in the same way it did yesterday. Duh. But how do we actually know that the laws of physics aren’t changing, ever so slightly, from day to day? It’s a hidden logical assumption that underpins all science, ever. We assume that an airplane will fly because it always does. We assume that baking soda and vinegar will make a frothy mess because it always has. But what if the laws of physics do change over time and in different locations, and we’re just too galumphing to perceive it?

“The modifications might be very, very small,” says physicist Nicolas Yunes of Montana State University, who was not involved in the experiment. Although all evidence so far indicates that the laws of physics don’t change, you can never be completely sure. “Everything we measure is approximate,” he says. “If you’re measuring distance with a ruler, you can only measure up to the accuracy of the ruler.”

To try to catch the laws of physics changing, you basically have to perform a task, over and over again, with painstaking precision, in as many locations as possible. If the outcome ever changes, that’s your hint that the laws of nature have switched it up on you. Patla’s task: watching clocks tick, ad nauseum, for over 14 years.

His team chose atomic clocks because they’re some of the most precise machines humans have ever invented. Instead of ticking according to the swing of a pendulum or the vibrations in a quartz crystal, these clocks follow the steady beat of an atom. These atoms are engineered to emit light waves that oscillate at a constant several billion times a second. Patla’s clocks count the cycles of light, which are so consistent that the clocks won’t lose or gain a second in tens of millions of years.

But Patla’s team wasn’t interested in keeping time—they were studying the atom-emitted light inside the clock. That light’s color tells you something about how its origin atom is structured: the way that its nucleus and electrons interact. An atom’s nucleus and its electrons both have a slight magnetism that causes each component to slightly push and pull on the other.

Patla’s lab chose to study this obscure-sounding phenomenon because they could observe it in the clock with high precision. The clocks stay in a temperature and humidity-controlled room, and its atoms are kept in a vacuum-sealed chamber. NIST employees take rotating shifts to coddle the clocks properly. “If the temperature changes more than 0.5 degrees, they’ll get alarms to go fix it,” says Patla. “Most of it is automated, but someone watches it all the time, and someone carries a beeper.” Patla’s team can account for every single source of environmental effects they can think of, such as Earth’s gravity.

They also wanted to know if the magnetic interaction occurred in the same way for different atoms—so they used two different types of clocks, one that contained hydrogen atoms, and another that contained cesium, which is more than 100 times heavier. The concept they tested is similar to Galileo’s apocryphal experiment, in which he dropped two objects of the same mass off the Leaning Tower of Pisa and found that they fell at the same acceleration regardless of their composition. Patla wanted to see if the magnetic interactions in two different atoms, even though they are assembled from different numbers of protons, electrons, and neutrons, would behave the same way over time and space.

So from November 1999 until October 2014, they watched these magnetic interactions over and over again—and they also managed to observe the interactions in multiple locations without having to physically move the clocks. Technically, the clocks orbited with Earth around the sun, so depending on the day, each measurement was actually in a different location in the universe. “We’ve moved the lab 14 times around the sun,” says Patla. He’s not trying to be cute; it turns out that Earth moves through some distinctive regions in space. Because Earth’s orbit isn’t a perfect circle—its distance from the sun varies—the clock moved through varying gravitational fields.

A cesium fountain clock at the National Institute of Standards and Technology, one of the most accurate clocks in the world.
Geoffrey Wheeler

The verdict? Cesium and hydrogen’s subatomic particles behaved in exactly the same way over 14 years, even at different points in Earth’s orbit.

To be clear, Patla’s group hasn’t definitively proven that the laws of physics are unchanging across all time and space. All they can say is that in the last 14 years, the laws of physics have not changed in our neck of the universe, according to the best tools that human engineering can provide. Still, they can now say this with five times more certainty than they could a decade ago. And if it holds true for Earth’s location in the universe, it’s not too much of a leap to imagine it’s true elsewhere, says physicist Clifford Will of the University of Florida, who was not involved in the work. “It’s not a bad assumption, and there’s some evidence for it, that the physics here must be the same in other galaxies and at other times in the universe,” he says.

Will isn’t surprised at their result. If they’d found the magnetic interaction changed from day to day, it would have upended current physics theory. “But it’s worth pushing the limits, just in case you find something,” he says.

In particular, it’s important to keep confirming the basics as much as possible. Einstein’s theory of general relativity does an incredible job of describing most of what researchers have observed in the universe. But it can’t explain everything, says Yunes. It doesn’t explain what dark matter is, or why the universe is expanding at an accelerating rate. So something is missing from the theory—and these tests will help physicists figure out what it is.

Patla’s team is planning to do this experiment again with upgraded clocks. They should be able to look at this magnetic interaction with three times more precision than before. Whether they find new leads about the nature of the universe—well, only time will tell.

*Correction at 3:10 p.m. on 6/4/2018: An earlier version of this story misstated the number of seconds elapsed in the experiment.

GizmoCrazed - August 4, 2018 0
A company called Rentlogic has raised $2.4 million to take the guesswork out of determining whether that cheap, beautiful New York apartment is actually a deathtrap wrapped...

Drones Are a Greener Way to Receive Packages

23andMe's Pharma Deals Have Been the Plan All Along