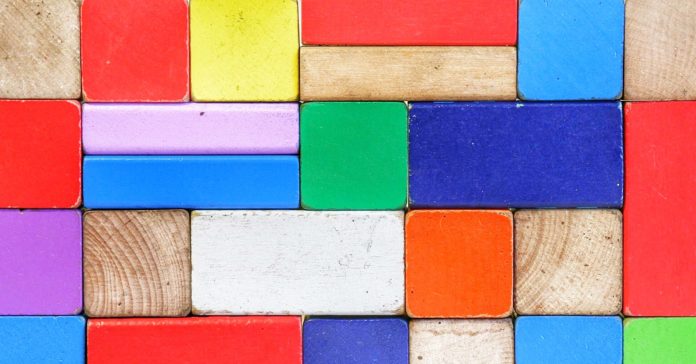 This is a cooler physics problem than I initially realized. It goes something like this.

A block has a mass of 1 kg and is placed on a vertical wall such that the coefficient of static friction is 0.5. With what magnitude force do you need to push on the block perpendicular to the wall to keep the block from falling?

Here, a picture will help.

But how do you increase the friction force so that it’s enough to keep the block from falling? In a basic model of friction, the magnitude of this force depends on two things: the types of materials interacting and the force with which they’re pushed together. You can’t really change the types of material in the block and the wall—but you can control the force with which they’re pushed together. In the diagram above, this force is the normal force (labeled as N). In general, we can write this friction model as the following:

So the pushing force (F above) increases the normal force (N) and this normal force increases the friction force to balance the weight. I’ll skip the rest of the steps (you should do this for homework), but in the end, the minimum force (which uses the maximum friction) would be:

Does this answer even make sense? Yes. First, it has the right units (units of Newtons) since the coefficient of static friction is unitless and mg* is in Newtons. Second, this says that with a greater coefficient of friction, you don’t have to push so hard. That makes sense. But really, this problem is just a warm-up. How about something better?

Next question. What if I take the same block and push up at an angle? Like this:

Would I have to push harder or not as hard to keep the block up? Go ahead and make a prediction. OK, now let’s do it. Again, I will start with a force diagram. It’s pretty much the same as before except that pushing force is at an angle.

Except that it’s not the same. Some cool things happen. First, since the force is pushing at an angle the x component decreases. This means the normal force also decreases, which decreases the frictional force. However, that’s OK since the force now has a vertical component too. With this force diagram, I can again write down the sum of the forces in the x and y directions. I will skip most of the steps (so that you can do it for homework), but here is what I get for the magnitude of the force pushing at an angle (I also used the friction model from above).

That’s nice. Right? But again, we should check this equation. Does it have the correct units? Yes—the denominator of this expression just has μs and trig functions which do not have units. This means that overall the expression has units of Newtons. That’s good. What would happen if I push with an angle of zero degrees? Putting in zero for θ in this expression I get the same answer as the first question (pushing horizontal)—so that makes sense. Finally, what if I push straight up with θ equal to 90 degrees? This would give a force magnitude equal to the weight of the block—again, that seems reasonable.

But wait! What about the answer to the question about pushing horizontal compared to pushing at an angle? Which requires more force? As long as the angle is between 0 and 90 degrees, the stuff in the denominator will be bigger than just μs such that the force will be smaller at an angle. Is there a “best” angle that requires the least amount of force? Yes! Let’s find it.

Of course you could take the equation for the force as a function of θ above and take the derivative with respect to θ and then set it equal to zero. This would be your standard max-min problem from calculus class.

What if I just sort of use brute force to solve this problem? I can calculate the force required and a bunch of different angles and then just find the angle with the smallest force. Since I don’t actually want to do this by hand—I will use Python. And here is that program (so that you can play with it too).

Just push the Run button to run it and then you can go back and edit the code if you want to play with it. Don’t worry, you can’t really break anything. This is a fairly straightforward program. But the cool part is that there is a minimum pushing force at some angle. It’s easier to see with larger values for the coefficient of friction, so in the code above, I have it set at 0.6. With this value, a push angle of about 59.9° gives the lowest possible force. This force is lower than pushing it horizontal and lower than pushing straight up. In fact, every angle gives a lower force than pushing it horizontal.

What happens as you change the coefficient of friction? Just for fun, I made the program a little bit more complicated so that I can create this plot. (Here’s the code if you want it)

I don’t care what you think. This is cool. See, you thought it was a boring physics problem, but you were wrong. Oh, what is this good for in real life? It doesn’t matter. I still think it’s awesome.

Other than playing around with the code, I just have one homework question for you. Given the same values for mass and the coefficient of static friction and pushing angle—what is the maximum force you can push on the block before it slides up? Hint: you will need to change the direction of the frictional force. Also, you should try changing the angle and see what happens—you know … for fun.