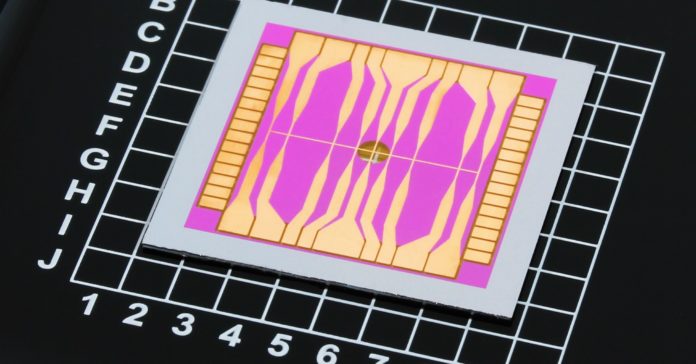 On a frigid day last January in northern Sweden, a German-led team of physicists loaded a curious machine onto an unmanned rocket. The payload, about as tall as a single-story apartment, was essentially a custom-made freezer—a vacuum chamber, with a small chip and lasers within, that could cool single atoms near absolute zero.

They launched the rocket about 90 miles past the boundary of outer space, monitoring a livestream from a heated building nearby. Then, just 17 minutes later, they watched as the freezer plummeted back down to Earth, landing via parachute on snowy ground 40 miles from the launch site.

This ridiculous-sounding experiment is something physicists have been aching to do for years. See, the freezer that the Germans launched has the ability to make atoms clump together in a cloud-like blob called a Bose-Einstein condensate—a phase of matter that exhibits some truly bizarre properties. It’s delicate enough to respond to tiny fluctuations in gravity and electromagnetic fields, which means it could someday make for a super-precise sensor in space. But down on Earth, it tends to collapse in a matter of milliseconds because of gravity. So the blobs had to go to space.

Since the late 90’s, physicists have been developing machines that can autonomously assemble and control the blobs during spaceflight. And with this rocket launch, they’ve succeeded. The group in Germany, led by physicist Ernst Rasel of University of Hannover, just released pictures of blobs they managed to create, as well as precise measurements of how they jiggled during their brief trip. “They’ve essentially laid the groundwork to show that you can actually do this, and it’s not totally insane,” says physicist Nathan Lundblad of Bates College.

The launch builds on about two decades of effort. Since physicists discovered Bose-Einstein condensates in 1995, they have predicted that some of their most interesting properties would only be evident from space. “But at the time, it was, frankly, crazy,” says physicist Robert Thompson of NASA’s Jet Propulsion Laboratory. “The experiments were huge labs full of equipment.” They had to figure out how to make the freezers much smaller and stabler to survive the trip to space, which involved miniaturizing lasers, mounting electronics on chips, and securing them all very, very firmly. They also needed to test their automated machine: In one memorable experiment, Rasel’s group threw a freezer down a 500-foot tower onto a pile of styrofoam peanuts like a gaggle of modern-day Galileos. But with the rocket, they got six minutes to do their experiments, rather than just four seconds in the tower drop.

Thompson is leading a US effort to do similar experiments. Last month, his team installed a new experimental setup on the International Space Station, called the Cold Atom Laboratory, which will make Bose-Einstein condensates in microgravity for years. Lundblad is planning to use the lab to make the blobs form bubble-like shapes, which is pretty much impossible on Earth. Studying the bubbles should yield new insights about how atoms organize themselves. Lundblad will be working remotely, though: When the initial experiments begin in about three months, his team will be puppeteering the bubble-blobs from an office computer.

They do these experiments because the Bose-Einstein condensate is no ordinary blob. It’s a distinct phase of matter with no true parallels in anything else you see in everyday life. “It’s like, imagine you were in a culture where you’d never seen ice,” says Lundblad. “You find out that when you cool water past 32 degrees Fahrenheit, this amazing form of H2O appears that is crystalline and regular.” When atoms cool down to become a Bose-Einstein condensate, they undergo a drastic transformation utterly unlike their initial state.

The freezer forces the atoms, which usually bounce around in random directions, to slow down and act like a single unit. Physicist Dana Anderson of the University of Colorado, Boulder, says the blob “is to atoms as laser is to light.” A laser is a beam of very orderly photons; a Bose-Einstein condensate is a blob of very orderly atoms. And that orderly unit does weird stuff. Just like a photon of light behaves like both a particle and a wave, this blob also has wavelike properties, where one part can actually interfere with another part, to produce ripples in itself like waves colliding in a pond. One motive for these experiments is just to study how the blobs actually behave—because they are so unlike anything else on Earth.

Another overarching goal is to make these blobs interfere with themselves and to see how the ripple patterns change with subtle environmental fluctuations. The patterns should be sensitive to tiny changes in the microgravity of space, which could make them good navigational tools. In addition, precisely studying how gravity acts on quantum objects could shed light on how to unite the theory of general relativity with quantum mechanics theory, says physics graduate student Maike Lachmann of the University of Hannover. “General relativity is really good at describing everything that is large, and quantum mechanics is about small things, like single atoms. The problem is in between,” she says. “How do they fit together?”

These experiments could also further quantum computing efforts, says Anderson, whose company ColdQuanta has supplied the NASA experiment with hardware. Researchers are planning a “quantum internet” in which quantum computers could connect to each other via satellites. Unlike regular telecom satellites, these satellites send delicate signals made of quantum particles, which require precision technology very similar to the ones used to create and control Bose-Einstein condensates. If they can pull off making these blobs in space, a lot of that tech can also enable satellites to send and receive quantum messages.

Thompson’s team is planning to run the Cold Atom Laboratory for three years. After that, they want to collaborate with the German group to upgrade the space station lab for a new round of blob experiments in their freezer. Just call it the ISS-box.

GizmoCrazed - July 20, 2015 0
Modern medicine has given us a life we could never have imagined. The average person lives to be 75, smallpox has been eradicated, polio,...

This 3D-printed bicycle is stronger than titanium