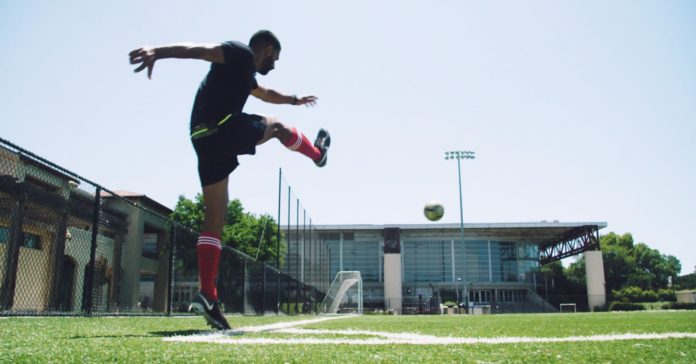 On my first attempt at a corner kick in decades, the soccer ball peels up and away, well behind the goal and clear over the fence surrounding Stanton Field, the practice pitch at Santa Clara University. “Not bad,” says Brandi Chastain, generously. “You’ve got good bend, now we just have to make sure we get you in the right direction.”

The Olympic gold medalist and two-time World Cup champion offers to show me how it’s done: She grabs a ball and places it inside the 90° arc of white paint at the corner of the field, steps away at an acute angle, breathes deep, and bounds forward. Her right foot connects with a viscerally satisfying thwok, and the ball heads for a point several yards wide and right of the goal. Almost immediately, though, it begins to lean left. “Get there!” Chastain barks, and the ball obeys, swooping toward the goal and bouncing into the back right hand corner of the net. Chastain grins. It’s just one of several goals that she’ll score directly from a corner that day. But in a game, she says, you almost never see them. At this year’s World Cup, which kicks off this week, Chastain wagers you won’t see any.

Players call a point scored directly off a corner kick a gól Olímpico—an Olympic goal. So-dubbed in 1924 for a direct-from-corner point against Uruguay (then the Olympic title holder), few players in the 94 years since have managed to incorporate the shot into their shooting repertoires, and fewer still have executed one during a match—intentionally, at least.

In 2012, when American midfielder Megan Rapinoe scored the first Olympic goal at an Olympic Games, it was by accident. She had meant to place the ball a few yards in front of the goal. Instead, her kick curved left, slipped through the legs of an opposing player, and bounced by Canada’s goalie just inside the near post.

Standing along the goal line with Chastain, it’s easy for me to see why Olympic goals are so uncommon: The corner of the field lies in the same plane as the goal’s posts. The only way to score is to bend the ball, such that it moves first away from, and then toward, the goal’s opening. You’re literally aiming for a target you can’t see.

Short of a fortuitous gust of wind, the only way to pull it off is by putting an ample serving of spin on the ball. “You can basically take the ball and make it turn whatever way you want it to, depending on the placement of your foot on contact,” Chastain says. The key, when shooting from the left corner, is to place your kick on the ball’s right hand side, a couple of inches below the midline. (You should feel the brunt of the impact on your first metatarsal, the big, knobby bone just behind your big toe.) This lends the ball loft and, more importantly, a counter-clockwise spin about its vertical axis.

As the ball takes flight, air passes over its sides. On one side, it flows with the spin of the ball; on the other against it. A thin layer of turbulence forms along the former, which drags the air and deflects it back behind itself, at an angle. And, thanks to Newton’s third law, the air deflects the ball in the opposite direction with equal force, causing it to bend in the direction of its spin.

Physicists call this the Magnus effect. It’s the same phenomenon behind a pitcher’s curveball and a golfer’s slice. The effect can be surprisingly strong; engineers have used it to propel tanker vessels out at sea, using spinning metal cylinders up to 10 stories tall. The faster air moves across these so-called “rotor sails,” the more effective they are. And similarly, the greater a soccer ball’s velocity through the air, and the quicker its spin, the more dramatic its bend.

The surface of the ball can also influence its flight: The rougher the ball, the more pronounced the Magnus effect. In soccer, fewer panels and seams translate to smoother balls—like the infamous Jabulani design, which Adidas produced for the 2010 World Cup using just eight thermally bonded, spherically molded panels. (The classic hexagon-pentagon pattern features 32 panels.) The surface of a perfectly smooth ball has a harder time dragging air in the same direction as its spin. Instead, turbulence forms along the side of the ball moving against the flow of air, which wraps around the ball and deflects in a direction opposite the ball’s spin. This produces, confoundingly, a reverse Magnus effect.

The Jabulani ball wasn’t nearly as rough as a typical soccer ball, but it wasn’t perfectly smooth, either. The result was a fitful flightpath that varied depending on the ball’s spin rate and the speed at which it was kicked. Players found the ball so bedeviling, NASA researchers stepped in to analyze its fluid dynamics. Sure enough, they found the ball’s design produced an erratic, asymmetric wake that compelled the ball to swoop and swerve unpredictably.

As if players don’t have enough to worry about when setting up for a corner kick. The day I meet with Chastain, we’re the only people on the field, and there’s a steady breeze in the direction of the goal—but game conditions are never so ideal. Wind, altitude, even the humidity can affect the ball’s flight path. And it’s not like you get multiple attempts to dial in your aim: You get one one shot. Even if you can bend the ball consistently, the odds of it going in untouched by anyone else are basically zilch, which is why, when most players set up for a corner kick, they’re aiming to put the ball in front of the goal—not into it.

As for me, I struggled to place the ball so much as next to the wide open goal. Only after many attempts, and a lot of feedback from Chastain, did I manage to net a shot from the corner of the field. The trajectory was bloodless; the ball spent most of its trip rolling lazily along the ground. It was the kind of shot which, in an actual game, would definitely have been blocked.

“There’s a lot of factors that can go into a player deciding to attempt a shot like this in a game, but the two big ones are absolute confidence and technical ability,” Chastain says. “You have to have those two things to go forward, because if you don’t, and you miss wildly, your teammates are going to look at you like: Really? Why’d you do that?” That’s why you’re not likely to spot an Olympic goal at this year’s World Cup. Most players who find themselves in the position to attempt at Olympic goal won’t be willing to take the risk.

But every so often, the opportunity does present itself. “All the elements have to be right,” Chastain says. The wind. The weather. The position of the goalie and the players on the field. Occasionally, when everything aligns just so, a player will chance bending the ball to their will, and toward a vacant section of the goal. And sometimes, when they’re lucky, it even goes in.