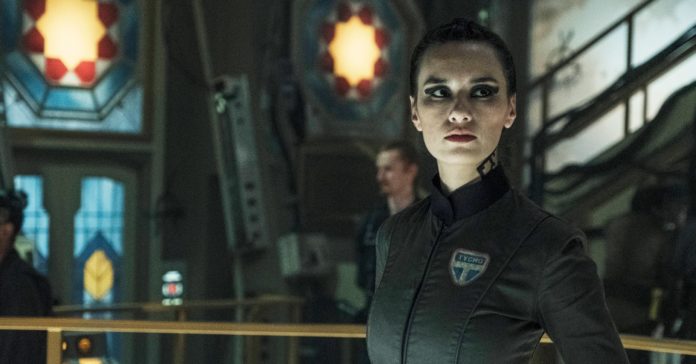 The Expanse should just change their post credits for each episode to include a list of homework questions. Seriously—there are so many great things to explore in this hard science fiction show.

In a recent episode, one of the large spaceships (the Navoo) rotates in order to create artificial gravity (that’s not really a spoiler). How about some questions and answers about this giant spinning spaceship?

How do you make artificial gravity?

Let me get right to it. You are probably somewhere near the surface of the Earth and there is a gravitational force between you and the Earth pulling you down. But here is the crazy part—you don’t really feel this gravitational force. Since the gravitational force pulls on all parts of your body, you don’t feel it. What you actually feel as “weight” is the force from the floor (or seat) pushing up on you. We call this the “apparent” weight.

Here is a case where you can see how this works. Go to an elevator and get in. Press the “up” button. When the door closes, the elevator starts to accelerate upwards. How do you feel? Anxious? Bored? Heavy? Yes, you feel a little bit heavier than normal—even if just for a short time. In order for your body to accelerate upwards, there must be an upward net force. This means the force of the floor pushing up must be greater than the weight pulling down. The actual weight doesn’t change, just your apparent weight. Like I said, you don’t really feel the gravitational force.

OK, get out of the elevator and get in a spaceship. It doesn’t matter if this spaceship is in orbit around a planet or traveling between planets. All that matters is that the motion is only due to a gravitational interaction (with the planet or with the sun). In that case, everyone inside will only have the gravitational force and they will feel weightless. So, how do you make “weight”?

This is the way most spacecraft create “weight” in The Expanse. They use their thrusters to accelerate so that they are either speeding up or slowing down. But either way, there is a force on the humans inside and they feel “weight.” If the spacecraft accelerates at 9.8 m/s2 (which is the same value as the gravitational force on the surface of the Earth) then the humans inside would feel just like they do on Earth.

But wait! There is another way to accelerate a human inside a spacecraft—make the human move in a circular path. Since acceleration is defined as the rate of change of velocity and velocity is a vector, just changing direction is an acceleration. The magnitude of the acceleration while traveling in a circle depends on both the speed and radius of the circle.

Since it’s a rotating object, it’s sometimes better to talk about the acceleration in terms of the angular velocity (ω) in radians per second. Oh, the direction of this acceleration (as a vector) is towards the center of the circle. This means you can make a rotating spacecraft in which the humans stand on the inside with their heads towards the center of rotation and they can feel “weight.”

Boom. This is exactly what happens with the Navoo in The Expanse. Oh, there is actually a plot point in that only the Navoo can create artificial gravity.

What does the Navoo do when it’s not rotating?

Great question. For all the previous episodes, the Navoo did not rotate. They created artificial gravity just like everyone else—they had rockets accelerate the spacecraft. Oh, you should note that often the spaceships are flying backwards because they don’t actually fly in space. Flying implies using air to create lift and that’s not what’s going on here.

If you want to go from point A to point B, here’s what you do. Step one: Turn on your thrusters and speed up your ship with an acceleration so that you have artificial gravity. Step two: Halfway there, turn the spaceship around so that it is facing opposite the direction of travel. Now turn on the thrusters again so that the ship slows down—yes, this is still an acceleration and you would still have artificial gravity.

Now for the problem with the Navoo—it’s just a small problem. Let me draw this ship as a giant cylinder.

So, where is the bridge—the place where they control the spacecraft? The real answer is that they probably should have two separate bridges. There would be a bridge for “thruster-mode” and a bridge for “spinning-mode.” Here is the problem. In the show, it looks like there is just one bridge. But really—it’s just a small detail and it doesn’t really bother me. I’m just pointing it out for fun.

How long would it take to get the Navoo rotating?

In the show, they show the Navoo rotating up to spinning speed. Here’s all the data I can get from this part of the episode (along with some dimensions of the Navoo).

Let’s start with the one ten g (I’m going to start talking like a belter). If the humans in the “drum” (the cylinder part of the ship) have an apparent weight of 0.1 g (0.98 m/s2), then I can calculate the final angular velocity by using the radius of the drum.

With the values for the acceleration and radius, I get a rotation speed of 0.063 radians per second or 0.6 rpm (so not very fast). But note that the Navoo doesn’t need a super fast rotation rate since it is so huge. Just for fun, here are the size and rotation rates for some other science fiction spaceships.

If you want get this spaceship rotating at 0.063 rad/s in 30 seconds, the angular acceleration would be 0.0021 radians/s2. Yes, that seems small—but remember, this is a huge ship. How much energy would it take to get this thing rotating and what about the power output? I will leave these as homework questions. You will have to estimate the mass and the moment of inertia for the Navoo (or you could assume it’s a hollow cylinder).

But wait! There’s more. We actually see the Navoo increasing in rotational speed in the show. I can use Tracker Video Analysis to get the angular position of the side of the ship as a function of time and from that find the angular acceleration. Here is the plot of angle vs. time.

Fitting a quadratic function to this data, I get an angular acceleration of 0.00038 rad/s2. Yes, this is significantly smaller than the acceleration based on the 30 second time interval from the show—I’m actually surprised. I would have expected the angular acceleration from the visual of the rotating drum to be higher than calculated so that you could actually see it increasing in rotation speed.

OK, how about another homework question? With the angular acceleration from the video, how long would it take to get up to a rotation rate to produce 0.1 gs?

What about the debris in the center of the drum?

There is another view of the rotating spacecraft from inside the “drum.” The center of the Navoo is basically empty with all the people on the inside wall—but in this case there are a bunch of objects “floating” in the middle after some incident (I won’t say what happened). As the Navoo starts to rotate, you can see this “floating” stuff do two things. First, they appear to rotate because of the relative view from inside the rotating spacecraft. This is legit and what should actually happen (I love saying “actually happen” for science fiction stuff). Second, the inner debris starts “falling” towards the outer walls of the rotating drum. This part is wrong.

Why wouldn’t the debris “fall” under the influence of the artificial gravity? It wouldn’t fall because it’s not rotating. The debris doesn’t rotate around the axis of the ship because nothing pushes it to get it spinning. The rest of the stuff in the ship is connected to the floors and walls. There are rockets that increase the rotational speed of all of the stuff connected to the ship, but that doesn’t happen for the floating debris. No rotation means no artificial gravity.

Oh, but eventually this inner floating junk would fall. As the ship rotates, it will eventually push the air in the center to also spin. This spinning air will feel like a wind and the wind would slowly push this debris into the wall-floor (not sure what to call the inner side of the drum). But still, it’s a cool looking effect—even if not accurate.

Overall, this is a great show—and it gets most of the science right!