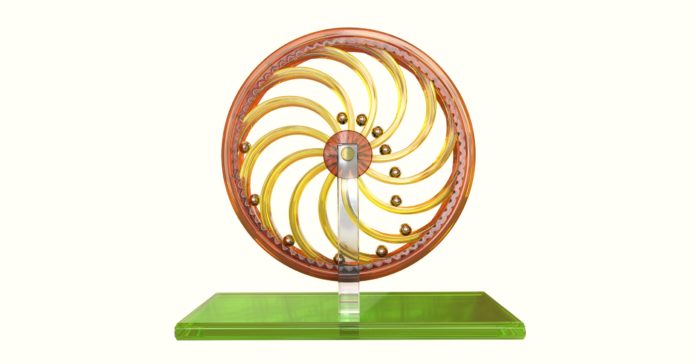 Perpetual motion—it’s fun to say that. For some people, perpetual motion machines hold the secret to everlasting free energy that will save the world. To them, it’s a machine that is just beyond our grasp. If only we could tweak our design just a little bit, it would work. To others (like me), perpetual motion machines are impossible—they don’t fit with our well-tested ideas of the conservation of energy. However, they can still make a fun puzzle, as you see above.

OK, so exactly what is a perpetual motion machine? The basic idea is that these machines can operate in some manner (say with a spinning wheel) forever without an energy source. That’s not so impossible, just not very easy (since machines always lose energy to friction). A better perpetual motion machine not only works forever, but also has a positive energy output (even if just a small amount) so that it can save the world—but like I said, these don’t exist.

Why don’t perpetual motion machines work? It’s all about energy. In short, energy is this quantity that we can calculate for some system. It turns out that because of the way we define energy, this quantity doesn’t change for a system that doesn’t have external interactions. That, in a nut shell, is energy conservation (where “conservation” means “does not change”). Energy isn’t really real—it’s just something that works. It works time and time again. It works so well that if we find a case in which it doesn’t work, we look for some type of missing energy (and we find it).

OK, so now we have a perpetual motion system. In theory, a “real” perpetual motion machine would have zero energy added to the system but still have an energy output—forever. How do we test this? The best way is to somehow isolate the machine so that we’re sure there are no energy inputs. That means blocking out light, radio waves, microwaves, magnetic fields, and thermal temperature differences. Don’t even let the thing shake. If you can completely isolate it and it still has an energy output, then you just changed everything we know about physics. Congratulations. You deserve some ice cream now.

Looking at This Particular Machine

Now for the puzzle. How does this particular machine work? It’s clearly not a real perpetual motion machine—there is some trick to make it work. I would love to play with this thing, but all I have is a video. If I could try some stuff, I’d like to see if it runs without lights on it. I would also see if I could measure any temperature differences. Remember, this thing doesn’t need much energy for a mere spinning wheel. If the friction is low enough, you really wouldn’t need to add much energy at all.

With that being said, I am going to make some guess as to how this works. Here are my ideas.

Solar Powered. Not real solar powered with a solar cell and a motor—that might be too obvious. Instead it could use solar power as a method for differential heating. Yes, this would be just like the previous idea unless it uses some type of actual solar cell (which I don’t see).

A Frickin Battery. Yes, this is a real possibility. The stupid wheel could just have a battery in there that keeps it spinning for long enough that no one can tell. I wouldn’t be surprised if it’s a battery with all the other things added as a distraction.

I guess we will never know how it works—unless I get my hands on that letter with the answer.

But if you think about it, this perpetual motion machine is a great example of the nature of science. The machine is real life, and we (the humans) are trying to figure out how it works. We come up with different ideas and then find some way to test if our ideas are legit. Suppose I think the sucker is solar powered. If that is indeed the case, I could cover the machine with a cloth and it should stop working. Of course we’d never really know if we were right about how it worked, but you’d know if you are wrong—if the “test” didn’t do anything.

So, it’s not just a puzzle—it’s an artistic expression of the nature of science.