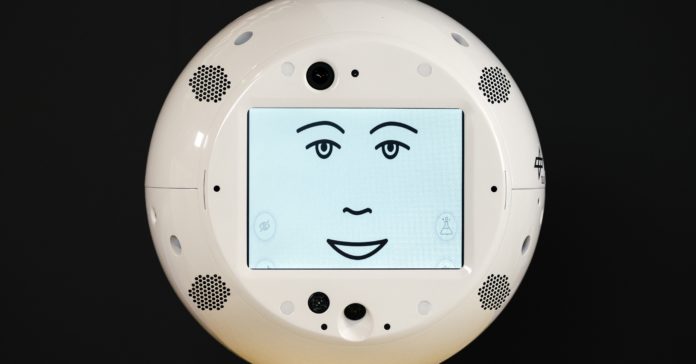 The next shipment headed to the International Space Station packs nearly three tons of research and resupply materials. You know, the typical stuff: sediment studies, a plant thermometer, a replacement hand for the giant robotic Canadarm. Oh, and also a floating robot designed as a helpmeet for astronauts—scientifically, logistically, and emotionally.

The bot’s full name is Crew Interactive Mobile Companion: Cimon. It looks like one of those spherical pool speakers, if you replaced the speaker with a screen that displays a line-sketch face that talks back. This is no full-utility HAL: On this demonstration mission, Cimon is there to help the Station’s commander with three very simple tasks that test its utility. But longer-term, Cimon could also watch and interpret how crew members interact with each other, tracking the social dynamics that might escape the astronauts’ handlers on the ground.

Cimon is a joint project between the European aero company Airbus and IBM, funded by the German space agency DLR. And its developers hope astronauts will kind of enjoy working with the bot, that having a task-buddy will de-stress them. But it’s complicated—because work buddies aren’t (usually, hopefully) recording you.

Cimon doesn’t have a body, but it has cameras for eyes, microphones for ears, and a speaker for a mouth. Using fans as fins, and ultrasonic sensors for proprioception, it is free to move about the microgravity cabin. It can respond in human language to human questions and statements, and learn from (recording, downlinking, and analyzing) interactions. Plus, engineers equipped it with a personality (ISTJ, they claim). With all that, Cimon’s parents hope it’ll make a good (spying) socializer.

To give Cimon its smarts and social skills, Airbus turned to IBM and its Watson AI, which has been used for automated banking, personalized in-car ads, and health care—although it’s been widely criticized for failing to, for instance, live up to the promises it made to cancer treatment providers. You can kind of think of Watson like a two-year-old: It understands language and some general things about the world, and if you expose it to data from a given sector, it can learn—and learn to draw conclusions—about that topic.

So before it was ready for flight, Cimon needed to learn some space things—like the lingo. Astronauts, for instance, don’t say “yes.” “If they want to be affirmative, they say ‘affirmative,’” says IBM’s Matthias Biniok. “Or the abbreviation ‘a-firm.’” Which Watson might normally interpret as “a company.”

For some of these shorthands, the companies turned to astronaut and Space Station commander Alexander Gerst, who will be Cimon’s primary buddy. On station, Cimon and Gerst have three to-dos together, the first being an experiment about how crystals form in microgravity. Instead of having to float to and from a floating PDF manual for this study, Gerst can instead ask Cimon about the procedure. “Also more sophisticated queries like, ‘What kind of tool do I need to use right now?’” says Biniok. “Or, ‘Why do I need to use Teflon?’”

For their second collaboration, Gerst and Cimon will also try to solve a Rubik’s cube together (“Open the pod bay doors, Cimon, so I can throw this cube out the airlock”). And, finally, for a medical experiment, Cimon will act as a mobile video camera, meaning Gerst won’t have to mount special recorders to the right views.

There is some artificial help, though, that Gerst declined, because he didn’t want to be watched and analyzed all the time. Cimon’s artificial brain usually connects to the IBM cloud, streaming data down to Frankfurt. While IBM won’t feed ISS data back into the broader version of Watson, Gerst wanted even stronger security protections. So the team incorporated a push-button privacy mode that temporarily stops the data from leaving the Station. “Of course you don’t want to be surveilled all the time,” says Philipp Schulien of Airbus. Alone, he continues, “they can feel free to do whatever they want to do, to talk freely.”

For similar reasons, Gerst also vetoed the so-called “tone analyzer,” which uses syntax to read mood, a bridge too far for Gerst’s ship. Would you want a robot telling a ground station that you seem filled with existential dread today—especially since that could be wrong?

Nevertheless, catching astronauts’ feelings is part of Cimon’s longer-term goals, which include, according to Airbus, “[examining] group effects that can develop over a long period of time in small teams and that may arise during long-term missions.” Spying on the space clique, in other words.

Ella Atkins, an aerospace engineer who studies astronaut-robot collaboration, doesn’t see Cimon’s capabilities as a privacy problem. “Sharing the day-to-day experience is assumed,” she says. Astronauts don’t really have an expectation of privacy: There are cameras everywhere already. “That said, if the astronaut is not feeling chatty, Cimon can and should recognize when to ‘leave the astronaut alone for a while,’” continues Atkins, “as would a human friend.”

That will have to be tested in actual space with actual astronauts. And, indeed, presumably developers will watch not just how humans interact with each other (and their own isolation) but also how they interact with Cimon.

Biniok says the team did imbue the bot with emotional intelligence and compassion. “You can tell Cimon ‘I miss my family,’ and Cimon will not answer, ‘Oh, no, that’s very sad,’” says Biniok. “He will understand, ‘That’s something I can be compassionate about.’” He might ask if he should try to videocall the family. Or suggest you go on a spacewalk, grab that new robotic hand, and drape it over your own shoulder.

GizmoCrazed - April 3, 2018 0
About Glen Hiemstra Glen Hiemstra is the founder and owner of Futurist.com. An internationally respected expert on future trends, long-range planning and creating the preferred...