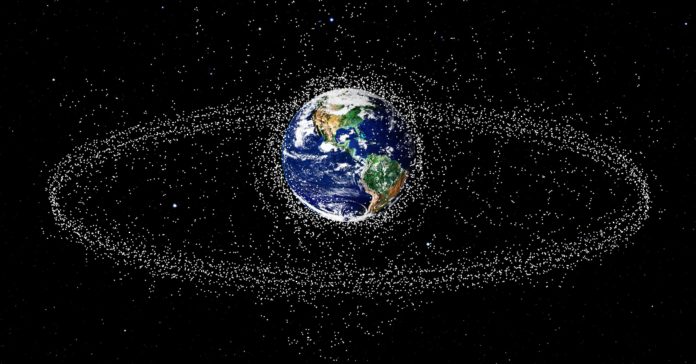 In the early Space Age, the people who sent up satellites could operate under what’s known as “big sky” theory. Space is so vast, so spacious, that we could never possibly use it all up. History, however, has repeatedly shown that whenever we think something is too abundant for humans to deplete, we’re wrong. And so it is in space, where more and more satellites and space junk threaten to crash into each other and crowd out the future. In 2016, the Air Force’s 18th Space Control Squadron had to tell satellite operators to watch out for each other 3,995,874 times.

The burden of sending all those safety messages has rested squarely on the Defense Department’s shoulders. But on Monday, President Donald Trump signed Space Policy Directive-3, which shifts some of that space traffic responsibility to a new owner: the Department of Commerce.

Commerce? Indeed. “I am instructing my administration to embrace the budding commercial space industry,” Trump said in a meeting with the National Space Council, where he signed the directive. It’s long and covers a range of topics, but its most notable decrees deal with the responsibility for space safety.

Part of that involves leaving some commercial space concerns to the Department of Commerce. See, technically, the military is supposed to be taking care of military problems. But as the number of satellites grows, so does the amount of time the DOD has to spend telling DirecTV to duck. “The growing demands and complexity of the safety of spaceflight missions are increasingly competing for resources with the national security mission of the US military,” wrote Brian Weeden of the Secure World Foundation, a space sustainability think tank, in SpaceNews. While the DOD will continue to maintain the authoritative catalog of objects in space, the responsibility for safety, warnings, and public dissemination of data will fall mainly to the Department of Commerce—which now has to deal with decades’ worth of orbital objects, on top of all the new ones approaching the launch pad.

Right now, US policies dictate that once satellites’ missions are over, they should deorbit no more than 25 years later. No good, says the new policy. NASA, says the directive, “shall lead efforts to update the US Orbital Debris Mitigation Standard Practices and establish new guidelines for satellite design and operation.” And prelaunch certification for satellite-launching companies could involve new strictures.

Sending up your own giant constellation of thousands of satellites? Great job, now make sure they don’t crash into each other. Oh, you want us to track them for you? Develop some beacons to help us out. And for the love of God, encrypt your command and control communications until your satellite’s life is over, at which point it had better spiral to a fiery death. The details of all that are still to come, and while the directive—by its nature and by its content—calls for standards and protocols and regulation, Trump had a request about rules: “Don’t let it get too out of control, please.”

But the ever-increasing number of private space companies means now’s a good time for the Air Force to back out of the public space-traffic management game. Because while there are already many objects in orbit—from operational satellites to screws to spent rocket stages—there are about to be a whole lot more. Satellite companies like SpaceX, OneWeb, and Planet either already have huge fleets or plan to. “If all of these plans materialize,” scientists from federally funded research and development center the Aerospace Corporation warned in a policy paper, “the population of operational satellites in [low Earth orbit] would jump by over a factor of ten—from ~1,000 today to over 16,000 within the next 10 to 20 years.” And the number of watch out messages would also grow, the paper continues, by a factor of 10 in some space regions.

Right now, most of what’s up there isn’t even functional—it’s more than 90 percent space junk. For that reason, the directive signed by Trump recommends “active removal,” in which debris is taken out rather than left to decay downward at its own pace. This is not a new idea, and Obama’s 2010 National Space Policy exhorted the US to dig into active removal, but little forward movement has happened there. Perhaps because it’s a fraught prospect. Any active remover—be it a harpoon, or a net, or a robotic arm—could peacefully deorbit a defunct American satellite, or it could mess with a foreign sat. That is, perhaps, why Trump’s policy says the US should develop standard protocols for “rendezvous and proximity operations.”

Under the new directive, the Defense Department will continue to track and catalog space debris and functional satellites. It already keeps watch over more than 20,000 objects using the Space Surveillance Network, a system of optical and radar equipment spread around the globe. A new “Space Fence” will soon come online that can see smaller space bits.

The DOD will now provide the “releasable” part of its (vast) catalog to the Department of Commerce. Which, in turn, will be expected to incorporate other orbital and safety data—from other agencies, from the private sector, from other countries—and take the lead in creating an open orbital-data repository. With its multitude of information, the Commerce Department will now be responsible for telling satellite operators when they’re in trouble and what to do about it.

Obviously, the directive gives some guidance about how to deal with the traffic jams already happening. Which is good. But better is that it also aims to function like that highway patrol cop parked on the side of the interstate—preemptively slowing down troublemakers barreling down the turnpike.

GizmoCrazed - December 19, 2017 0
The Switch has had an amazing debut year, defying worries that it would crash and burn like its superficially similar predecessor, the Wii U....

Study: Stubborn Kids Are More Likely to Be Successful

Astronaut Captures Explosions Over Israel And Gaza From Space