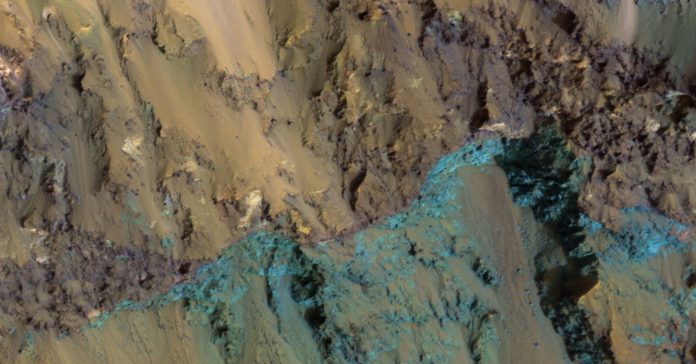 This week we’re staying close to home, relatively speaking. First, we’re swinging by Mars and checking out Hale Crater. This large impact crater was created when some space object—likely an asteroid or a comet—got a bit too close and left this deep, permanent reminder of the encounter on the surface of the planet. Hale Crater is full of features like gullies and exposed colorful rock, and it also has something called “recurring slope lineae.” These are marks that show up seasonally, and some think they may be very salty liquid water, but their cause and makeup are still being debated.

Then we’re going to a world with much more water than Mars—Saturn’s moon Enceladus. This icy moon is famous for its geysers of water and ice spewing out into space. (Some of that gets gravitationally pulled into Saturn, and helps make up some of its outer rings.) It’s hot at the sources of these geysers, just like in the ones here on Earth, which makes scientists wonder whether Enceladus might actually support life. To learn more about the possible habitability of this moon, NASA scientists are even going to Hawaii to study hydrothermal vents at the bottom of the ocean. They will take a deep dive to study an undersea volcano to test how the water might combine with the heat; maybe it could generate just the right chemical reactions to allow for microbial metabolism to take place.

Haven’t had your fill of craters, moons, and space geysers? Check out Wired’s starry collection here.

Amazing Pictures Of Alcoholic Drinks Under The Microscope

GizmoCrazed - July 21, 2014 1
Getting lost in an alcoholic drink has never been defined any better than this. You would probably never have wondered what your alcoholic drink...

The AI market is growing, but how quickly is tough to...

Razor startup Harry’s will be acquired by Edgewell Personal Care for...