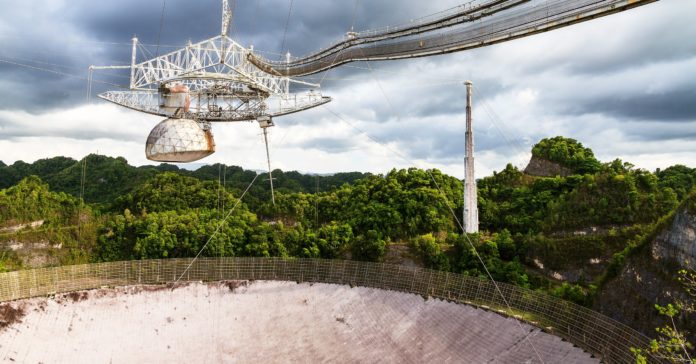 As Hurricane Maria approached Puerto Rico in late September 2017, planetary scientist Ed Rivera-Valentin knew he needed to get out. His apartment was near the coast, in Manatí, and some projections had the storm passing directly over. “I knew I couldn’t stay there because something bad was going to happen,” he says.

Some people stayed with inland family or in shelters. But Rivera-Valentin went to work, driving an hour or so into the island’s karst formations, the knobby, tree-covered hills left as water dissolves limestone. Between the peaks sits Arecibo Observatory, the 1,000-foot-wide radio telescope where scientists have, since 1963, studied things up above. Rivera-Valentin grew up in the city of Arecibo, and as an adult, the telescope became his professional home: He got his dream job using Arecibo’s radar to study asteroids. As the hurricane approached, he also thought perhaps the observatory could be his bunker.

The telescope, though, was soon to meet with unusually strong forces of nature. Like the island itself—which was hit with some $90 billion of damage, hundreds or thousands of deaths, and infrastructural failings—the observatory took a beating from Hurricane Maria. Eight months later, with recovery money from the federal government newly available, Arecibo is just beginning to bounce back. While the hurricane didn’t knock Arecibo out, it did leave the telescope a fraction as effective as it once was. And it did so at the same time that the telescope faces decreased funding from the National Science Foundation and a disruptive change in management.

Rivera-Valentin wasn’t the only employee who had decided to retreat to the telescope. At the observatory, most of the employee-evacuees hunkered down in the visiting scientists’ quarters, meant for out-of-town astronomers, and the cafeteria. But Rivera-Valentin stayed in his office. As water seeped through every gap it could find, he put himself on mopping duty. Inside the control room and engineering building, where the main corridor was flooding, another scientist—Phil Perillat—protected the electronics.

As the calm eye of the storm passed over, Perillat snapped a photo of the telescope’s “line feed”—a 96-foot-long radio receiver that looks like a lightning rod. It hangs 500 feet above the dish, pointed toward the ground. You might remember it from Golden Eye, when James Bond dangles from the rod in an adrenaline-filled chase scene. But in Perillat’s picture, the line feed itself is dangling. It had snapped in the wind, which reached 110 miles per hour at the observatory site.

At some point, Rivera-Valentin heard a boom: The dangling line feed, he would later learn, had completely detached, falling hundreds of feet onto the dish and smashing through its surface panels like a meteorite.

After the storm had passed, on September 21, people were stuck at the observatory for days. The two roads leading down from the site were blocked by trees, landslides, and even a newly-formed lake. But observatories, in general, are meant to keep up operations when the grid goes down. They have generators, water. Angel Vazquez, director of telescope operations, was able to contact the outside world with his HAM radio, and let them know everyone was OK.

The radio telescope, however, was not. When employees first attempted to assess the damage, they went to the visitors’ center, where an observation platform overlooks the dish. They couldn’t get as up close as they usually could, by walking underneath it: An eight-foot-deep lake—which lingered till December—now lapped against the telescope’s undergirdle. Eventually, they paddled beneath the massive structure in kayaks, and saw damaged panels hanging below the surface, looking like roof metal twisted in a tornado.

Meanwhile, the observatory itself had morphed into a relief center. When one of the the roads finally opened, about two days after the hurricane’s landfall, local residents arrived for support. “Anyone who walked up to the observatory, they were getting water,” says Rivera-Valentin. “Anyone who came up and said we need to do laundry, they could do laundry.” FEMA helicoptered in supplies to pass out to the community.

On September 29, staff brought the dish back online with generator power. The observing run wasn’t much, just “passive” work; they just held the telescope’s pointing mechanisms in place and simply let the sky drift over as it watched for signals from pulsars. In part, they wanted the scientific data. But they also wanted to run a diagnostic on the scope’s performance.

“The shape of the dish itself had changed,” says Rivera-Valentin. It couldn’t quite focus, like if someone had warped your camera lens. All the receivers still worked—save the one that, you know, crashed into the telescope. The telescope could still function, but its sensitivity was hobbled.

Despite the dish difficulties, which continue today, the observatory slowly began to do more science, in low-power mode. In November, it tracked a fast radio burst, and did a run in cooperation with a Russian radio telescope. And then in December, the region’s electricity flickered on. With that, the observatory could use the diesel generators to run its power-sucking radar. They sent powerful radio waves streaming into space, waited for them to hit an asteroid millions of miles away, and then waited for them to bounce back to their battered antenna.

On December 15, they observed the asteroid Phaeton. Rivera-Valentin was glad to have the data (and make little videos from it). It was a piece of normal.

But Arecibo has a long way to go before it’s all the way back. “They have started repairs,” says the National Science Foundation’s Joe Pesce, who until recently oversaw the Arecibo program. “But the vast majority of them are still underway.” It could take a couple of years.

Abel Mendez, who runs the Planetary Habitability Laboratory, has seen the change in the telescope’s performance firsthand. Mendez works at the University of Puerto Rico at Arecibo, training the telescope toward red dwarf star systems that have planets, to understand more about their habitability. After Maria, the telescope’s effectiveness dropped by about 50 percent in the high frequencies he uses, because of alignment, pointing, and panel issues. “Fortunately, the telescope was so sensitive before that that 50 percent—for what we’re doing—is not a big concern,” he says. At lower frequencies, the telescope was about 20 percent less effective post-hurricane. Still, some scientists need every bit of gain they can get. Much of the universe, after all, is far away, and hard to see.

The bipartisan budget act, made law in February, allocated $14.3 million to get the observatory back to full working order. The observatory just got its first allotment of that money, through the National Science Foundation, at the beginning of this month. Getting that federal money has been slow, but now that it’s in hand, the real work can begin.

The initial allowance—$2 million—is for the basics, like removing debris, fixing the fraying roofs, and giving CPR to the generators, three of four of which are having problems. “Work on those is up and going,” says Pesce. “Longer-term, there are the bigger fixes, like repairing the line feed.”

But in February, the NSF announced that Arecibo would soon be under new ownership, which means a leadership transition is taking place at the same time that a scientific rehab is starting. The NSF has historically funded much of Arecibo’s operations. But it had been looking for “partners” for a while. These partners would not only manage the facility, as the previous management team had, but would also pay for some of its operations, taking part of the financial burden from the NSF.

And so a three-organization consortium took over on April 1. The University of Central Florida, under the leadership of Florida Space Institute director Ray Lugo, is at the helm. Lugo used to manage operations and maintenance at Cape Canaveral, and in that role, he contracted with Yang Enterprises, a Central Florida company that provides technical, operational, and logistical services. Yang soon became the second part of the Arecibo partnership. The third entity is Universidad Metropolitana in San Juan, Puerto Rico. Together, the three will run the facility, expand its science, and search for new sources of funding. That hunt for cash comes because NSF is ramping down its funding, which will drop from $7.5 million to $5 million between the first and second years of the new project, and then down to $2 million by the fifth.

The NSF said—on a PowerPoint slide in a town hall meeting at a recent astronomy conference in Denver—that there are “some transition difficulties to be worked out.” Some employees, for instance, have left, which surely presents difficulties for them and for the observatory: For many people who have worked at Arecibo, it’s not just a job. It’s an identity, a home, a community, a place where everyone can do laundry when they need to. And a telescope needs people who have expertise on it.

Yan Fernandez, one of the university scientists leading the collaboration, says UCF will look to scientists beyond their consortium to figure out what cosmic questions Arecibo should pursue. “We want the scientific community to give us info about how Arecibo can keep its place as a cutting-edge observatory in the future,” he says. “The scientific priorities have to come from the scientists who know best.”

With the recovery money, the telescope should be fully restored and able to pursue those priorities, but it won’t ever be the same. And neither will the people who were there for it all. By the time Arecibo was first able to use its radar system in December, Rivera-Valentin had already left the island. His partner had gotten a promotion that took him to Texas, and Rivera-Valentin transferred to the Lunar and Planetary Institute in Texas, which is run by the same organization that co-managed Arecibo until April.

For a while, Rivera-Valentin was able to keep his affiliation with Arecibo Observatory. But when management changed, he became a passive observer. He still plans to use the telescope, as a guest. And while he’ll miss the island where he grew up, and the giant dish nestled into it, there are some positives. “The moment someone says the word ‘hurricane,’ I can drive all the way up to Canada,” he says.

GizmoCrazed - July 8, 2019 0
Some of the world’s most fascinating names and leaders in tech startup and investing come to our Disrupt Main Stage to discuss big-picture topics....

Updated Secret Code Hides Messages in the Letters Themselves