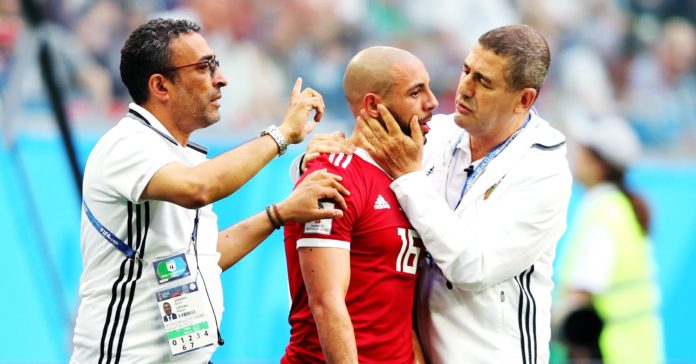 Today, during a World Cup game between Morocco and Iran, Moroccan winger Nordin Amrabat suffered a wicked head injury when he collided with an opponent. After he went down, a team trainer tried to revive him by slapping his face—a move decried by athletes and followers online.

But despite the frequency of those kinds of injuries in soccer, you won’t see many international pros wearing gear that might prevent a concussion—reinforced headbands. Recent tests show that some brands can reduce the impact of a concussive blow by more than 70 percent. Unlike sweatbands, these headbands are made with hardened polyurethane foam, like that found inside military helmets, while still allowing players to see the action around them.

Still, soccer pros are loath to slip them on. The combination of peer pressure (“Does it make me look weak?”) and institutional inertia (some soccer officials don’t think they help) means that soccer is sort of backwards when it comes to preventing head injuries.

“It’s not normal to wear them,” says Steve Rowson, an assistant professor of biomedical engineering at Virginia Tech who just completed tests of 22 commercially available models. “The players that do either have a history of head injury or were just hit.” Head injuries in soccer usually result from a collision between two players, often when one or both is trying to head the ball. To mitigate the risk, padded headbands have been on the market for nearly two decades, and FIFA, the sport’s international governing organization, allowed them for play in 2004. But Rowson and colleagues wanted to find out whether the headbands really work or are just expensive bits of padding. They cost about $15 to $90, which for most players is less than a pair of primo soccer shoes.

Rowson connected sensors to the soccer headbands and slipped them on a pair of crash test dummies at Virginia Tech’s helmet lab, which has tested football helmets for pro and collegiate teams. His team slammed the two dummy heads together, with and without headgear, and the embedded sensors measured linear and rotational acceleration at three different speeds and two locations on the heads. Those values were used to calculate a score representing how much the headband reduced a player’s risk of concussion for a given impact, according to Rowson.

While direct head-to-head hits generated a force of 150 g’s (150 times the accelerative force of gravity), compared to an average of 100 g’s during football hits, the headbands could reduce that acceleration. The three best headband models received a five-star rating in a system devised by Rowson’s team at Virginia Tech; five stars translates to a reduction in concussion risk of at least 70 percent for the impacts tested.

Superstars like England’s Wayne Rooney and USA’s Ally Krieger have worn headbands after injuries but took them off after a while. A few goalkeepers, like former Czech Republic captain Petr Čech, wear them religiously. But the push for protection isn’t trickling down from highly paid and idolized professionals, but rather from soccer parents who don’t want their kids facing a lifetime of concussion-related health problems.

The problem is especially acute for girls, who are suffering high rates of concussions from soccer. A 2017 study by Northwestern University researchers presented by the Society of Orthopaedic Surgeons showed that concussions among female soccer players occur at a higher rate than any other male athletes, and are increasing. Some researchers believe that boys suffer fewer concussions because they have stronger neck muscles than girls; others say that boys hide their symptoms, while girls are more likely to report them.

In 2014, a group of parents sued USA Soccer to force the sport’s governing body to prevent heading the ball because of the risk of head injury. That lawsuit was dismissed in 2015, but officials did agree to ban heading for both boys and girls under 12 years old.

In May, parents of two Pennsylvania players sued the US Soccer Federation and USA Youth Soccer claiming officials were negligent and failed to require headbands despite scientific evidence that they work. “We would like to protect these girls,” says Joe Murphy, a Pittsburgh attorney who filed the class action.

In a 2015 statement after the earlier lawsuit, US soccer officials stated that headbands don’t provide any protection and may increase the risk of concussions because they give players a false sense of security. But advocates of the gear say that times have changed. “The use of outdated studies and outdated ideas that have been invalidated is reckless,” Murphy says. “It’s like issuing leather football helmets.”

WIRED reached USA Soccer team physician George Chiampas by phone, but he said he was unable to answer questions about head injuries and headbands without clearance from the organization’s media department. Attempts to reach USA Soccer spokesman Neil Buethe were not successful.

As those lawsuits progress, new science will hopefully inform best practices. Tim McGuine, professor of sports medicine at the University of Wisconsin School of Medicine, is wrapping up a two-year clinical trial of 3,000 male and female high school soccer players in Wisconsin, Minnesota, and Ohio. He distributed headbands to half the group, while the others play without them. He is still processing the data, but said an initial analysis shows that the headbands do make a difference for some groups of athletes, and there’s no indication that using them increases the risk of head injury.

Still, McGuine says many soccer coaches are stuck in the past. “It’s like football coaching culture was 30 years ago,” McGuine says about the attitude of coaches and league officials toward protective headbands. “The coaches say we don’t want to change the game, or the girls are just faking it. I thought it was just a Wisconsin phenomenon, but it’s everywhere. It’s just bizarre.”

It’s likely that more than one World Cup player will get a head injury during the month-long tournament that just kicked off. Some will shake it off and return to play (just like Morocco’s Amrabat, who rejoined his teammates), while others will get a serious concussion that could lead to health issues down the road. But by the time the US hosts the 2026 World Cup, perhaps we’ll be seeing more soccer players deciding that headbands are worth wearing before they get hit.