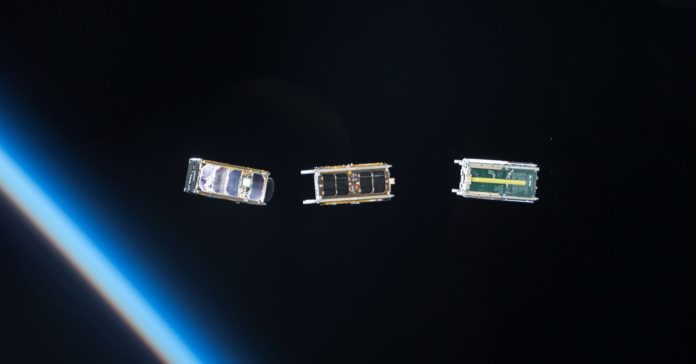 Small satellite makers have promised to do a lot of things: change the way we communicate, change the way we see our planet, change the way we predict the weather. They’re cheaper, faster to develop, and easier to update than their bigger and more sophisticated counterparts. But for all the revolution and disruption, they tend to keep their focus close, and largely cast their eyes down.

A new NASA program, called Astrophysics Science SmallSat Studies, aims to turn their gaze outward, toward the cosmos. Early this year, NASA asked scientists how they would turn smallsats into tiny (but mighty) telescopes. Answers are due by July 13.

While the space agency has other smallsat science programs, they have mostly hemmed themselves within the solar system. “The Earth is bright; the sun is bright,” says Michael Garcia, the program officer. “So small telescopes can see things very easily.” But trying to see the dim light from objects beyond our neighborhood usually demands much bigger telescopes. See: Extremely Large Telescope, Very Large Array, Large Binocular Telescope.

In space, above the blurring of the atmosphere, telescopes don’t have to be quite as huge to do the same job as an Earthbound observatory. But they are usually bigger than smallsats. That’s why, in the call for proposals, NASA emphasizes that the new smallsat program “is intended to capitalize on the creativity in the astrophysics science community.” And, indeed, it looks like that community does have some ideas for how to do more science with less instrument.

Last year, NASA sent a call out to scientists, asking if they had ideas that required more funding than a suborbital project, and less satellite than the smallest orbital missions. The agency wasn’t offering money, or collaboration, or anything. They just wanted a five-page paper about what astrophysicists would hypothetically do if, say, they hypothetically found a wallet containing between $10 million and $35 million and had to build an astro-studies smallsat with it. “We got 55 responses,” says Garcia. “We realized, ‘Wow, people really are interested in this.’”

Scientists, for instance, could use smallsats to do time-domain astronomy: watching for bursts and flares and flashes and pulses and all the other kinds of light-waves that appear and then vanish. Those phenomena work well for smallsats because, as their names connote, they’re often bright. Astronomers could also use the instruments to do surveys—to look at the whole sky in one wavelength band, for example—or to give brighter or nearby objects the attention that other telescopes may lavish on more distant and foreign bodies.

Knowing the interest was there, the agency pushed forward and put out this February request for proposals. The winners—six to 10 of them—will together get a total of $1 million of sweet NASA cash and six months to design a smallsat that could get astrophysical.

“We wanted to prime the pump,” says Garcia. Because next spring, soon after the six-month study of studying ends, the agency will ask tiny telescope dreamers to submit another proposal—but this time to actually build something.

That’s already three agency requests, before anyone gets started building. But this is still faster than NASA’s normal timelines. Its bigger missions can take many years in development, and have to work exactly as planned—or else. And when you know a complicated scientific instrument has to work or else, you’re going to use tried and true technology in tried and true ways.

On smallsats? Worth mere millions? With mere months of development? “You can take more risk than something that’s big and expensive,” says Garcia. For the suborbital program, which shot instruments to near-space, for instance, the agency aimed for an 85 percent success rate.

That’s not NASA’s usual goal. For more substantial observatories or human spaceflight, the agency needs to see A+s, not Bs. But the cool thing about these reckless smallsats is that they can carry aboard technology that may eventually make it into premier missions. They can test experimental new circuitry and sensors and software. And if they fail—oh well, there goes a few million. But if they work, engineers can bring them aboard fancier missions, faster, and perhaps disrupt some of our current understanding of the cosmos.