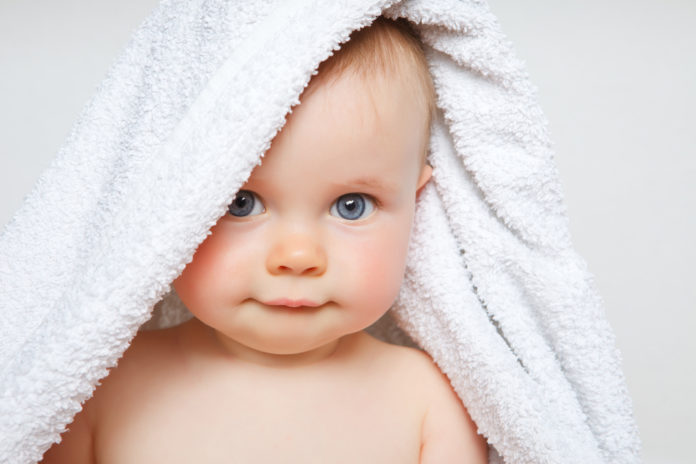 It seems impossible, right? We have been taught from the time we were young that babies are made when a sperm and an egg come together, and the DNA from these two cells combine to make a unique individual with half the DNA from the mother and half from the father. So how can there be a third person involved in this process?

To understand the idea of three-parent babies, we have to talk about DNA. Most people are familiar with the double helix-style DNA which make up the 23 pairs of chromosomes that are found in the nucleus of every cell in our body. It provides the instructions for building an entire organism and the proteins that drive our existence from conception until death. However, the DNA in the nucleus is not the only kind of DNA required for us to exist. There is also DNA tucked away in little compartments called mitochondria, which are found inside all of the cells in your body. 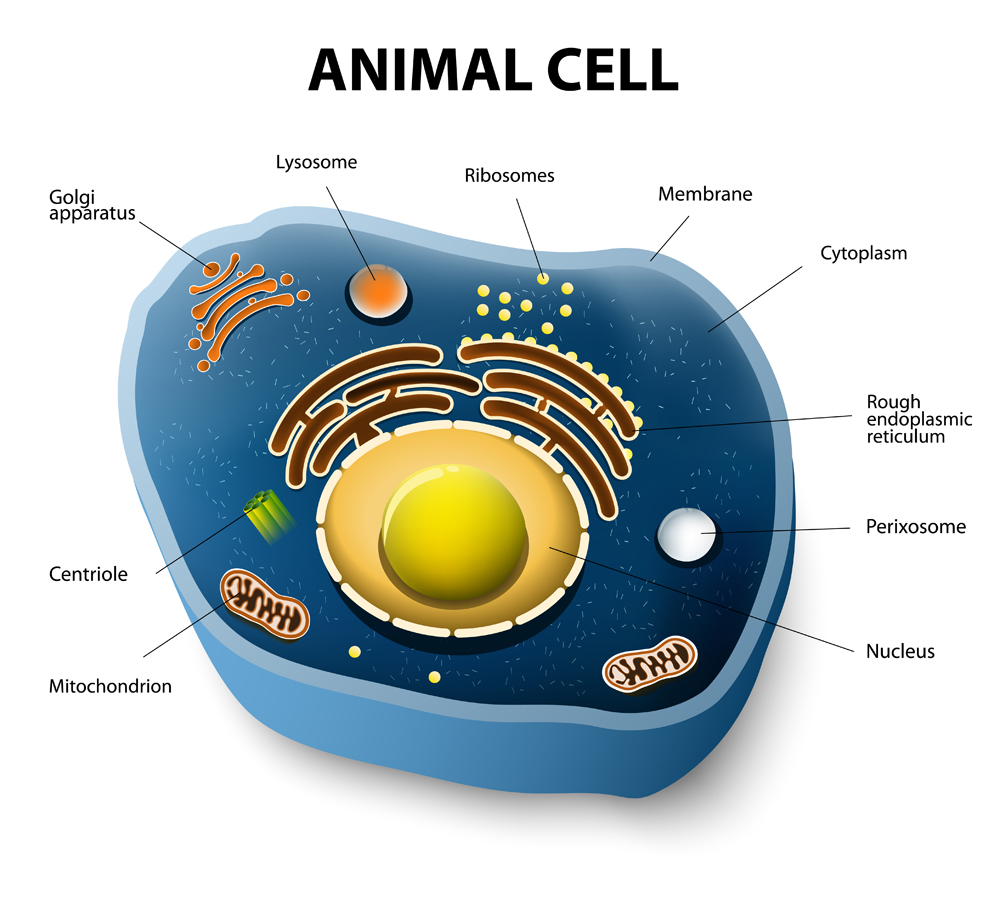 This is a cross section of an animal cell showing the location of the mitochondria, the brown bean-shaped structures. The 23 chromosomes are housed in the innermost compartment of the cell – the nucleus. (Credit: Shutterstock)

Remember the mitochondria? Dig deep back to middle or high school biology class. It was that bean-shaped organelle often drawn with a squiggly line on it and called the powerhouse of the cell. Each cell in the body, including eggs and sperm, requires energy to carry out all of its functions. Cells without functional mitochondrial DNA (mtDNA) are like cars without gas. 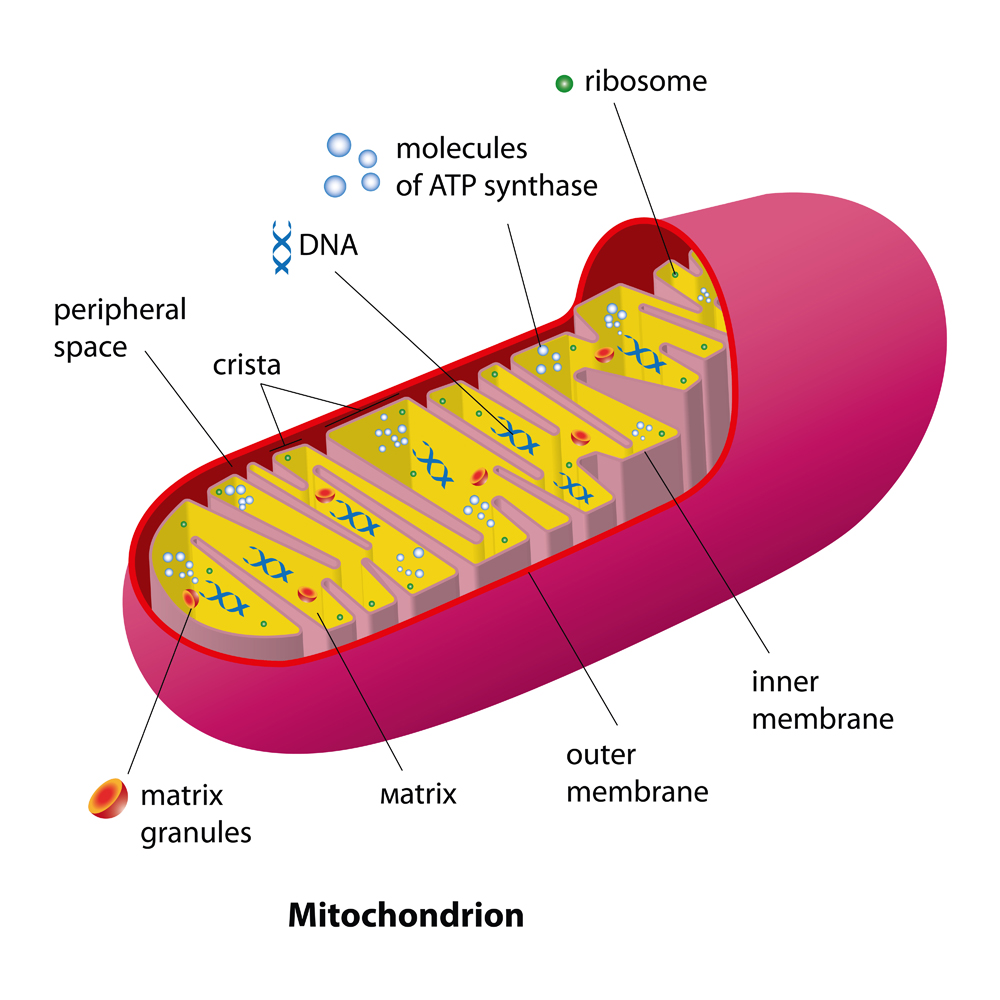 This is a cross section of a mitochondrion. These are referred to as the powerhouses of the cell. They contain their own DNA and produce energy for the cell. (Credit: Shutterstock)

Unlike nuclear DNA, mtDNA is not created by the combination of male and female DNA. Instead, mitochondria are only inherited from your mother, meaning that ones that are in the fertilized egg are the ones that will be replicated in every cell of your body during your development and for the rest of your life.

Just like nuclear DNA, mtDNA can have mutations that can lead to very serious, debilitating diseases, and in some cases, infertility for a woman carrying the defective mitochondria. Enter the third parent.

In 2016, a baby was born to a couple who had struggled with the consequences of mtDNA mutations that cause Leigh syndrome, a progressive neurometabolic disorder. When defective mitochondria of the woman’s egg were replaced with mitochondria from a donor who did not carry the mutation, the resulting child carried DNA from three people: the female nuclear DNA donor, the male nuclear DNA or sperm donor, and the female mitochondria donor. This was the first baby born using this technique. 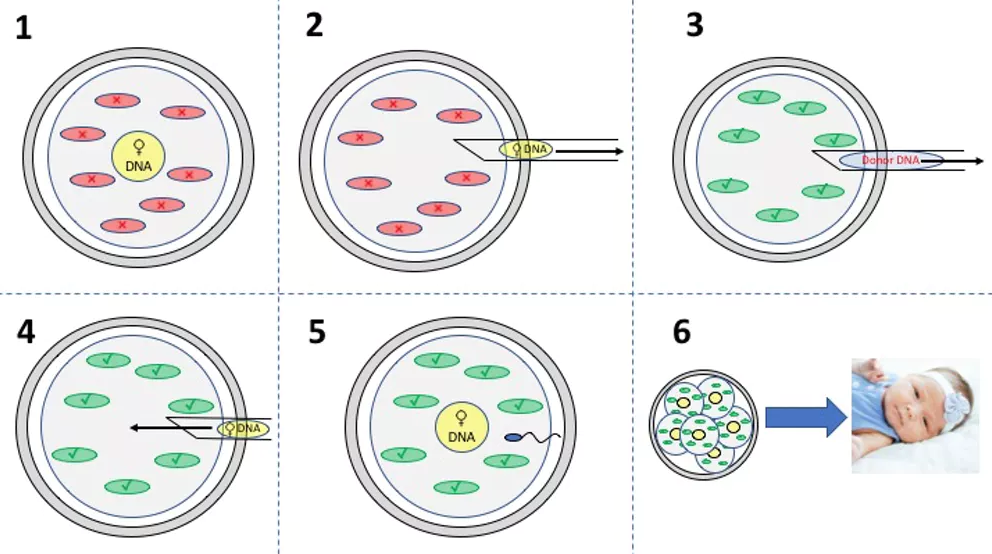 How to Make a Three-Parent Baby

1) The egg from the mother contains the DNA (yellow circle) and faulty mitochondria (red ovals).

2) The DNA is removed from the mother’s egg using a very small pipette.

3) The DNA is removed from the mitochondrial donor egg leaving behind the healthy mitochondria (green ovals).

4) The DNA from the mother is transferred to the donor egg with the healthy mitochondria.

5) The result is an egg that has the nuclear DNA from the mother and mitochondrial DNA from the egg/mitochondria donor, which can then be fertilized with the father’s sperm.

6) As the cells replicate during embryo development, each cell will have the combined mother and father’s DNA in the nucleus of the cells and the egg donor’s mitochondria and associated mtDNA.

Unlike an organ transplant, the effects of mitochondrial replacement will persist in future generations of offspring if the resulting baby is a female and she chooses to have children – males do not pass on their mitochondria. Also, the replacement will affect every tissue in the body, rather than just one body system, such as the cardiovascular system after a heart transplant.

Even so, these donated mitochondria are naturally occurring and already persisting in our population. They are not genetically engineered or altered in any way. Thus, as long as they are functioning properly, there is no demonstrated risk to the offspring from a health standpoint beyond the naturally occurring risks of spontaneous mutations, though this is a point of debate.

Since 2016, it’s difficult to say how many of these three-parent procedures have been done and how many resulted in successful pregnancies. But with the recent birth of a baby in the Ukraine that involved three parents, many countries are now exploring if and how to use this technology. The ban in the U.S. has halted the use here but other countries have made different decisions; the U.K. has approved it.

Is the Mitochondrial Donor a Parent?

So how much a parent is a woman who donates her mitochondria?

The short answer is not much. More than 99 percent of the proteins in your body are encoded by the DNA in the nucleus of your cells. Traits such as hair color, eye color and height, for example, are all encoded by nuclear DNA, while genes written on mtDNA are primarily related to energy production and metabolism.

Thus three-parent babies will still resemble the men and women whose sperm and egg combined to produce the 23 chromosomes in the nucleus of that first cell. It’s important for people to understand these distinctions as headlines announcing births of three-parent babies will likely continue to surface. Speculation of what it means could run rampant without understanding the underlying science.

One thing is certain: For women who struggle with infertility caused by mutations in their mitochondrial DNA, or have the potential to pass on significant mitochondrial genetic defects, this new technique provides hope that they may one day be able to have a healthy child that is a genetic representation of them and their partner – with a little help from a third party.