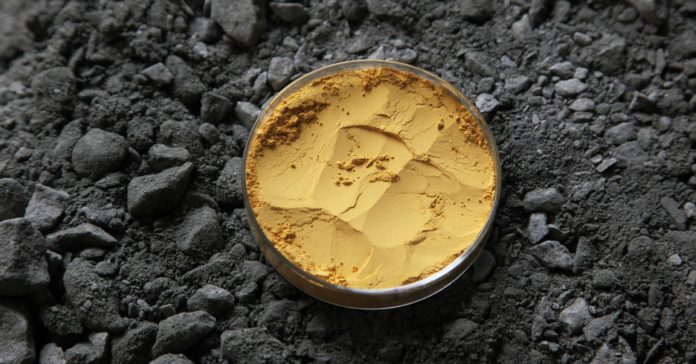 When geologist and nuclear security researcher Rodney Ewing left the University of Michigan for Stanford in 2014, he left some of his belongings back in the Midwest. Hundreds of his belongings, actually. All of them radioactive.

He wasn’t trying to poison anybody: It was a collection of minerals from around the world—some unearthed himself, some donated—each with uranium enmeshed inside. And soon, scientists would use this legacy in a novel Department of Homeland Security project—one that aims to hunt down the source of illegal nuclear material that could end up in bombs.

Ewing bequeathed the samples to his former postdoc, Peter Burns, then a professor at Notre Dame. And along with his colleague Antonio Simonetti, he set off to build a global forensic database of uranium ore to help the DHS identify the perps. Each sample has its own chemical and isotopic fingerprints, unique to the geological and geochemical forces that formed it. That way, if authorities find someone trafficking radioactive material, they can figure out where it came from. And a dirty bomb goes off somewhere, they can analyze the fallout’s fingerprint to determine the source of the original material—and so, perhaps, who took it.

For much of his career, Simonetti, a geochemist, had stayed in the scientific realm, researching Earth’s upper mantle. But around 2011, he heard about a program starting at an organization called the National Nuclear Security Administration. “Essentially, they were looking for a materials scientist who could investigate blast material in very fine detail,” says Simonetti—in particular, the leftovers from the first-ever nuclear blast.

There are two basic ways to find out the composition of radioactive material. “The conventional way is by destroying the sample,” says Simonetti. You dissolve it into solution, creating a kind of nuclear-chemical Kool-Aid. Then, you send that solution into a specific kind of mass spectrometer, which picks apart its individual chemical constituents. If you particularly want to know about the details of one element—like uranium—you purify the solution and pull out just that one thing. Then, you run it through the spectrometer to find out which isotopes show up how often. It’s kind of like text-searching a book to find out how many times the poorly edited author wrote “bookeeper” versus “bookkeeper.”

This is a precise method, but it’s time- and human-intensive. And it’s not how Simonetti does things. For his first nuclear project, he used “laser ablation” to slam a UV laser into a sample of radioactive glass called trinitite. The stuff exists only in one spot: inside White Sands Missile Range in New Mexico, where Manhattan Project scientists detonated the first nuclear weapon, codenamed Trinity. Nearly 70 years later, the bomb’s chemical and isotopic fingerprint was still etched into that glass.

A few years after finishing that work, the Department of Homeland Security initiated another nuclear forensics program. And they wanted Simonetti and his colleagues to use their methods to look into the nuclear future, not its past. That’s where Ewing’s radioactive inheritance came in handy.

Simonetti’s team set out to comprehend and catalog chemical and isotopic signatures in uranium ore from around the world—like the euxenite from Madagascar or the Schroeckingerite from Wamsutter, Wyoming. He put them them through the UV-laser wringer. He also investigated how those signatures changed as the uranium was refined, first into a form called yellowcake (try not to think of urinals) and then into pellets of radioactive fuel.

They then shared details with the Department of Energy’s national labs, working specifically Los Alamos, Lawrence Livermore, and Oak Ridge. These labs do some straight science, but the government created them during the Manhattan Project, and the white-hot core of the research remains nuclear weapons. Much of the work that goes on within their walls is classified.

But Simonetti’s research, done under the auspices of a university, is purposefully public, and unclassified for a reason. Simonetti’s peer-reviewed publications, popping up on Google Scholar, are supposed to signal to rogue actors that the Departments of Energy and Homeland Security could CSI their dirty bombs super fast. In other words, the world-facing database is meant to be a deterrent.

But while research that helps prevent bombage is critical, the nuke field as a whole is showing its age. In 1999, 34 percent of Department of Energy employees “supplying critical skills to the weapons program” (and the weapons program is a much bigger element of the department’s mandate than, like, solar power) were over 50, according to the Nuclear Weapons Laboratories Task Force. A decade later it was up to 40 percent.

It doesn’t help that young people are too young to have cached scenes from the Cold War in long-term memory. But if university professors like Simonetti involve their students and postdocs in nuke work, those impressionable trainees both learn how to do such work and might consider it a viable career option.

And while we can all have our opinions on nuclear weapons (mostly, one assumes, “let’s try really hard not use them”), the fact remains that they exist in huge quantities. Recently, the threat of their usage has seemed more imminent than usual. Someone has to prepare for what happens in the worst of times. And so Simonetti’s work sits on a digital shelf for now. “[The] research hasn’t been used to date,” he says. Which is good, “because if it has, it means something has gone bad—really bad.”

GizmoCrazed - November 2, 2017 0
Tesla went into a bit more detail about the production challenges it faces with the Model 3 in its letter to investors on the...

Let’s save the bees with machine learning

The 40 Years Of Email [TimeLine]