Pluto is a beautiful world, with ice mountains, nitrogen glaciers, a haze-layered atmosphere, and methane dunes. But all that complexity does not necessarily make it a “planet.” (Credit: NASA/JHUAPL/SwRI)

I love Pluto. I grew up entranced by this strange little world: What could you be, you rebel that doesn’t seem to follow any of the rules? I even wrote a childhood letter to a local astronomer, offering my homespun hypothesis that Pluto might be a captured fragment of an exploded star. When the New Horizons spacecraft finally revealed the true face of Pluto, I was right there at mission control in Langley, Maryland, to watch the images as they came in.

So I have a lot of sympathy for the Pluto-lovers who were wounded when the International Astronomical Union declared that the 9th planet was not exactly a planet after all, but something called a “dwarf planet.” I also appreciate the sweet irony that the fuss over Pluto’s reclassification stirred up even more interest in the New Horizons encounter. But really, the endless effort to restore Pluto’s planetary status and relegislate the definition of a “planet” is getting tedious. Time to settle this thing.

The problem, as I see it, is that people are asking multiple questions while somehow expecting only a single answer. I’m going to be a little presumptuous here and claim that there are really two answers—and that making sense of those two answers requires breaking them down even further. For you TL;DR types, here are the top-level answers to “is Pluto a planet?”

Answer one: It depends.

It depends. I know, this is an unsatisfying answer, but it’s also a truthful one. There are at least three different things that people (even professional astronomers) mean when they use the term planet. There are historical planets, dynamical planets, and geophysical planets.

Historical planets are those that have entered the common language of science and science writing as planets. Starting in 1801, the first dozen or so objects discovered orbiting between Mars and Jupiter were originally called planets. Then starting in the mid-19th century, astronomers began calling them “asteroids” or “minor planets.” By the early 20th century, popular astronomy writers like Agnes Clerke had embraced that language, and objects like Ceres and Vesta were no longer considered true planets.

Pluto went through a similar evolution. It was classified as a planet about as long as Ceres was, but with some differences. For more than 60 years Pluto seemed like one of a kind, whereas astronomers realized that Ceres was clearly part of a larger group of objects almost right from the start. And Pluto was considered a planet well into the modern era of space exploration, which gave it a special status. Historically, then, Pluto was and remains a planet—one of the nine “classical” planets circling the Sun.

Dynamical planets are defined by how they formed and how they interacted with their surroundings. This is where the IAU’s formal criterion that a planet should have “cleared the neighborhood around its orbit” comes from. The eight major planets are each the dominant objects in their regions, formed by sweeping up the smaller bodies around them. That is obviously untrue of the asteroids. At first, some scientists speculated that the asteroids were the remains of a planet that exploded. By the mid-20th century, people realized that they were actually the leftovers of a population that never accumulated into a planet in the first place.

Here, too, our thinking about Pluto went through a parallel evolution. The discovery of other objects in the Kuiper Belt, starting in 1992, confirmed a growing suspicion that Pluto belongs to a vast population of similar objects orbiting beyond Neptune. Some of these objects, such as Eris, are very similar in size to Pluto. These Kuiper Belt objects are drastically different from Neptune and the other (classical) planets, both in how they formed and in how they got to their current orbits. Dynamically, then, Pluto is definitely not a planet. 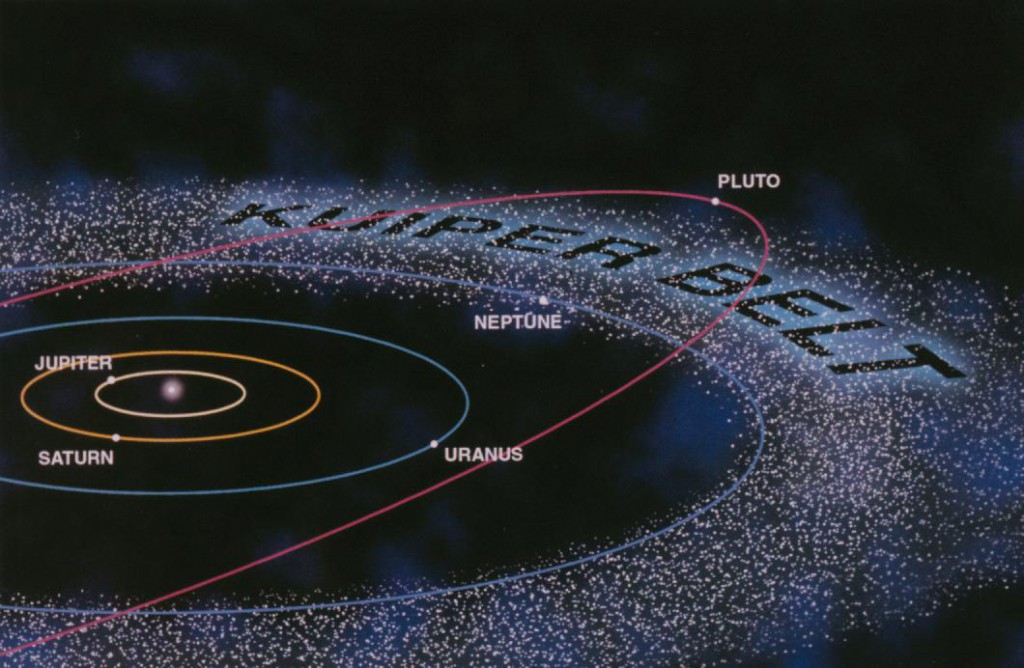 There is a lot of stuff out there around Pluto in the Kuiper Belt and its surrounding region, called the Scattered Disk. Collectively they make up the solar system’s third zone, after the rocky and gas-giant planets. (Credit: NASA)

Geophysical planets are defined by their size, complexity, and activity. This relates to the IAU’s other criterion that a true planet should be “nearly round.” In academic conversations, planetary scientists routinely refer to any large, round, geologically varied object as a planet. They commonly refer to the moons of Jupiter this way. They commonly refer to our own Moon this way.

When the New Horizons spacecraft flew past Pluto in 2015, it revealed a remarkable world with a haze-layered atmosphere, active glaciers, floating mountains, and slow-churning chasms full of squishy frozen gases. Pluto may be less than 1/5th the diameter of Earth, but it is fully rounded by its gravity and it is wildly complex in its terrain and its processes. Geophysically, then, Pluto certainly qualifies as a planet—a point frequently made by members of the New Horizons team.

So now we have two definitions that say yes, Pluto is a planet and one that says no, it is not. How do you resolve a split verdict like this? The only sensible answer is that you don’t, because trying to force a simple answer onto a complicated question is not just contentious…

Arguing about the “correct” classification for Pluto will never reach a meaningful resolution, because there is more than one meaningful answer.

Historically and emotionally, Pluto is a planet. No scientific argument will ever change that.

Dynamically, Pluto is not a planet, and there’s no truly convincing way to dispute that, either. Some of Pluto’s defenders argue that the dynamical argument can’t be applied to planetary systems around other stars, but that objection doesn’t hold up. If we find a group of small objects that share similar orbits around another star, we would immediately recognize those as analogs of our asteroid belt or Kuiper belt.

The issue of orbit-clearing is where I find the whole “is it a planet?” debate most counterproductive, because fighting to elevate Pluto back to planetary status only obscures what is most important about it. Pluto is not a loner, but the largest, brightest member of the Kuiper Belt. It is the archetype of an entire class of objects, the Rosetta Stone to the solar system’s third zone.

Now that we have seen Pluto up close, we have a sense of just how rich and complicated those objects can be. Pluto is unusual in having a huge moon, Charon, that is more than 5o% its diameter, along with four smaller satellites. Pluto is also one of the closest, warmest of the Kuiper Belt objects. For these reasons, it may be something of an outlier, more geologically active than the others…but that’s just a guess.

We need to look at more of the little worlds out there to know. When we finally get a clear look at Eris and some of the other intriguing bodies out there (Quaoar, Haumea, Makemake, and so on), we may find that they are active as well. One of the most exciting lessons from New Horizons is that even at temperatures just a few dozen degrees above absolute zero, icy bodies can be geologically active. “Dwarf planet” sounds a little clunky but it’s a useful term for Pluto and its ilk: complex, spherical worlds with a compelling but non-planetary origin story.

Based on their colors and shapes alone, the denizens of the Kuiper Belt appear to be extremely varied. Learning more about that diversity will tell us a lot about how these objects formed, and by extension how the solar system as a whole came together. And all of those variations, all of those different parts of the story, will be measured against Pluto, Kuiper Belt Object #1: not a planet, exactly, but in many ways something even more wonderful.