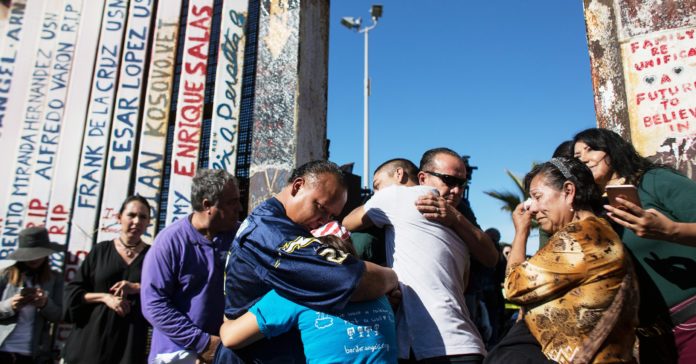 In the unfolding family separation crisis at the US-Mexico border, one thing has become increasingly clear; the federal government lacks any real plan for reuniting children with their parents.

On Wednesday, President Trump signed an executive order that would keep children and their parents together, though in indefinite detention. But the administration’s “zero-tolerance” policy reversal does little for the thousands of families currently waiting in US custody to be reunited. As WIRED and others have reported, the haphazard policy enactment has left asylum-seekers in a labyrinthine, multi-agency system rife with opportunities for records linking families to go missing or lack information. Especially for children less than a year old, it’s become distressingly difficult to simply match them to the parents they arrived with.

Amidst the turmoil, some concerned citizens have proposed an unlikely fix: Ship a bunch of spit kits to the border and start a DNA trail.

After pressure from a member of Congress and an outpouring of pleas on Twitter, direct-to-consumer testing company 23andMe has offered to donate DNA kits to help parents find missing children. Rival company MyHeritage made a similar offer yesterday, pledging 5,000 free tests to the cause, and promising the tests will be processed within the company and not shared with third parties. “We’re reaching out to anyone we can speak to at the relevant government agencies, including Ivanka Trump’s office, to find anyone who can assist with the logistics,” a MyHeritage spokesperson told WIRED.

So far, there’s no indication that federal immigration authorities will take them up on the offer. (ICE and HHS did not immediately respond to requests for comment.) But even if testing companies can coordinate getting the kits into the right hands, using DNA to reunite families isn’t going to be that easy. And between privacy concerns and the potential for future human rights violations, it might not even be a good idea.

“DNA is not a magic wand,” says Kayla Sheets, a genetic counselor at Vibrant Gene Consulting, which specializes in paternity/maternity testing. Without a rigorous framework for responsibly collecting, storing, and disseminating genetic information, it could do more harm than good. “My big concern is that this situation is critical and time is of the essence. Adding inappropriate DNA testing on top of everything could turn it into a human superfund site.”

For one thing, there’s no legal precedent for using the kind of technology 23andMe and MyHeritage employ, called genotyping, to determine familial relationships. So it may not be legally binding in immigration court. Genotyping can tell you how related to someone you are—if they’re an uncle, or cousin, say. The tests commonly used to determine paternity or maternity rely on a different method that provides a simple yes or no answer. Those comparisons are based on non-coding portions of the genome, the same kind of arrays found in criminal databases. Ancestry, another leading genealogy company, alluded to this in a statement emailed to WIRED: “Ancestry’s mission is to enable personal discovery journeys and help families build stronger connections. However, our direct to consumer DNA product is not intended as a paternity test and our privacy guidelines require parental consent to test a child.”

Spit kits like the ones hawked by 23andMe and MyHeritage have a higher likelihood of returning incidental findings, like a father turning out to not be a child’s biological parent. And tests can bring up old family wounds—like children born through rape and incest, or informal adoptions of distant relatives, which is common in Central American countries. Families are as much social networks as they are biological ones. What happens if a parent fails a test? Do they have to legally adopt their child to be lawfully naturalized?

Genetic counselors like Sheets say it’s of utmost importance that parents understand these risks before they might provide consent to be tested. Informed consent might even be impossible in scenarios like the one at the border, because immigrant parents under duress and vulnerable to coercion may not fully comprehend what they’re agreeing to.

An even bigger question is whether the children in US custody can consent to have their DNA tested. Both 23andMe and MyHeritage require the subject’s consent, or the consent of a legal guardian if the child is under 18, in order for a sample to be processed. Current Justice Department rules already allow the government to forcibly collect DNA from people crossing the border illegally. As of August 2017, the National DNA Index System had about 25,000 DNA profiles from detainees. Detained children aren’t charged with a crime, though; they’re treated as unaccompanied minors. Should reunification efforts fail—if parents can’t find their kids or provide proper documentation—the children become wards of the state and immigration agents can then consent to DNA testing on their behalf.

Under President Obama, the Central American Minors Program mandated DNA testing to verify the relationships between unaccompanied children petitioning to join their parents in the US. That program was disbanded in 2017 by the Trump administration. “One of the main criticisms of that program was the high cost,” says Dan Berger, an immigration lawyer in Massachusetts who has spent time at the border. “Something like a photo directory would be much less expensive and be way easier without any of the privacy issues.”

But in the last few weeks it’s been reported that Attorney General Jeff Sessions is looking into using DNA tests to confirm relatedness. Not for the express purpose of family reunification, but to catch human smugglers and traffickers. DNA testing is also making an appearance in the “compromise” immigration bill the House is set to vote on next week. It was pushed off after votes on the more conservative of the two GOP proposals—which contained the same language—failed Thursday. The remaining bill allows federal agencies to create new regulations making DNA testing mandatory for certain kinds of visas. Current law gives people legally seeking US citizenship the option to order DNA tests as part of their visa application if other forms of documentation are missing or their veracity is in doubt. One of the main testing labs that provides that service, DNA Diagnostics Center, says it has not been contacted about doing work at the Mexican border to help with the current crisis, but that it would welcome the opportunity.

“DNA can be useful to verify claimed relationships and for detecting human trafficking. And it should be used on the border, but only with parameters that protect that information from being used for secondary purposes,” says Sara Katsanis, who studies genetic testing policy at Duke. One way to do that would be to use rapid DNA instruments that read out genetic information immediately, so that samples can be destroyed on the spot—not retained indefinitely in a government storage facility. The information could be uploaded to a local database only used for the purpose of verifying the relationship of two people. Or you could not use government facilities for testing at all. Commercial labs could run the tests on de-identified samples and NGOs could have encrypted keys to unlock that information. “There are ways to harness the technology without just collecting everyone’s DNA that crosses the border,” says Katsanis.

The problem is that all of these things take time. And that’s something these families don’t have.

GizmoCrazed - May 23, 2012 1
It is said since long that woman is mysterious and enigmatic. You can never find out what’s going in the mind of a woman....

Sense Photonics flashes onto the lidar scene with a new approach...

'Heartbeat' Bills Get the Science of Fetal Heartbeats All Wrong