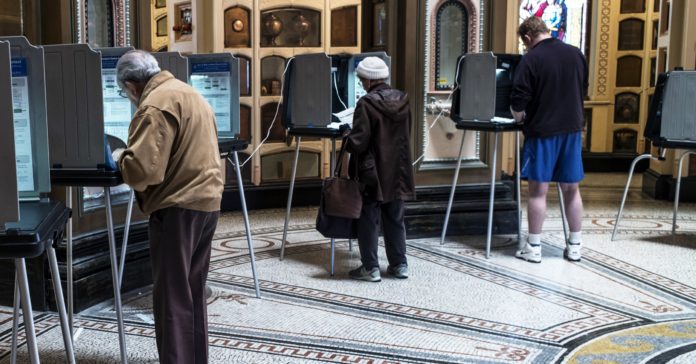 San Francisco Mayor Ed Lee died in December of 2017; the election to replace him was Tuesday. No one knows who won. Partially that’s because the votes are still trickling in. Mail-in ballots merely had to be postmarked by election day, and as I write the city is reporting 87,000 votes yet to be processed. But that’s not the only roadblock. The other problem is math.

See, the San Francisco mayoral election isn’t just another whoever-gets-the-most-votes-wins sort of deal. No, this race was another example of the kind of cultural innovation that California occasionally looses upon an unsuspecting America, like smartphones and fancy toast. Surprise, you guys! We don’t even vote like y’all out here.

The way it worked is called ranked choice voting, also known as an instant runoff. Voters rank three choices in order of preference. The counting process drops the person with the fewest first-choice votes, reallocates that candidate’s votes to all his or her voters’ second choices, and then repeats. Does this sound insane? Actually, it’s genius. It is also insane.

The mayoral ballot had eight candidates, including unlikely winners like a lawyer who’d run three times before, a holistic health practitioner, and a Republican. San Franciscans coalesced around three: London Breed, Jane Kim, and Mark Leno, all local elected officials with the kinds of intertwined histories that you could only get from two-fisted municipal politics in a region with astronomical amounts of tech money (mostly out of government reach thanks to sweetheart corporate tax deals and a history of failing to tax homeowners on the real value of their property). Breed has the most first-place votes so far—10 percentage points up on Leno, in second—but Kim’s reallocated third-place vote count has given Leno a margin so narrow it’d disappear if you looked at it on-end.

What’s the point of complexifying a straightforward election? The thing is, elections aren’t straightforward. Social choice theory lays out a bunch of different ways a group might make a decision, and “plurality”—whatever gets the most vote wins—is just one. It works great if you have a ballot with only two choices on it. But add more choices, and you have problems.

When Reform Party candidate Jesse Ventura defeated the Republican Norm Coleman and the Democrat Skip Humphrey for governor of Minnesota in 1998, political pundits saw voter disgust with The System at work. Ventura got 37 percent of the vote; Coleman, 35; and Humphrey, 28. But as Emory mathematician Victoria Powers wrote in a 2015 paper, exit polls said that almost everyone who voted for Coleman had Humphrey as a second choice, and Coleman was the second choice of almost everyone who voted for Humphrey. “The voters preferred Coleman to both of the other candidates, and yet he lost the election,” Powers wrote.

That’s plurality. The same problems come up with “antiplurality,” in which everyone says who they hate, and the person with the least votes wins. Both potentially violate Condorcet’s Theorem—as in the philosopher-mathematician the Marquis de Condorcet, who in 1785 said in part that an election should be won by a candidate who’d beat all the other candidates head-to-head. (Sequential pairwise voting, in which you eliminate the losers March Madness style, gives you a clear Condorcet winner … but that winner is different for every order you run the matchups.)

So, yeah, plurality: bad. “It’s very restrictive on voters,” says Daniel Ullman, a mathematician at George Washington University and the co-author of The Mathematics of Politics. “If you allow voters to say who their top two candidates are, or rank all 10 in order, or give approval to those they like or don’t like, or all sorts of other ballots, then things get interesting.”

They do indeed. The other systems let voters express more choice, but they also introduce what mathematicians call paradoxes. Here’s an example: ranked choice voting lacks “monotonicity.” That is to say, people sometimes have to vote against the candidate they’re actually supporting to make a win more likely. “That’s disturbing, because when you go into the ballot box you’re not sure if you should reveal what your true wish is,” Ullman says.

And indeed, some of the campaigning leading up to election day involved telling people which two candidates to vote for, regardless of order—basically, please vote against the other corner of the triangle. Flip side, imagine how different American history might be if the 2000 presidential election (Al Gore virtually tied with George W. Bush, Ralph Nader and Pat Buchanan as spoilers) had been ranked choice.

Ranked-choice and sequential pairwise aren’t even the weirdest possibilities out there. You could assign everyone a score, with some points for top choice, fewer for second, fewer for third, etc. Whoever has the most points at the end wins. That’s a “Borda Count.” Fun problem: In the same election with the same vote counts, plurality, antiplurality, and Borda count could all yield different winners. And Borda violates Condorcet, too. Yiiiiikes.

“There was a meeting of voting system experts a number of years ago, and they voted on which method they liked best. Apparently the plurality method got zero votes,” Ullman says. “One of the favorites was approval, where your ballot is a yes-no choice for each candidate, and whoever gets the most yeses wins.”

Yes, I asked how they chose. “They actually used approval voting,” Ullman says.

So do a lot of professional societies, including mathematicians. You might think that this would yield only the most anodyne, least objectionable choice, but you actually get winners—Condorcet winners!—with broad support. (Engineers don’t like it as much; the Institute of Electrical and Electronic Engineers abandoned the practice.) You can even go harder and hybridize various options, or add ranking to simple yes/no approvals. One downside might be that voters have to have an opinion about everyone on the ballot. “If someone said, ‘you have to submit a preference ballot and you have to rank all 20,’ there’d be a lot of people who would know their first and second choice, and maybe their third, but then say, ‘I’ve never heard of the rest of these people.’”

The mystery of who the next mayor of San Francisco will be wasn’t even primary day’s only drama. Instead of splitting up other races by party, in California everyone goes onto the same ballot, and the top two vote-getters advance to the general election in November. If they’re from the same party? So be it. Except this year Democratic enthusiasm was so high because of, like, everything, that the slates in those races filled with rarin’-to-go Dems representing every wavelength of blue from desaturated purple to deep indigo. That freaked out the national party, which worried that everyone would peel votes from everyone else, locking Democrats out of both slots in four districts when the party is hoping to take control of the House of Representatives. They didn’t get locked out, but the attempt at electoral innovation came from the same spirit.

California has long been willing to perform surgery on democracy to correct flaws both cosmetic and life-threatening. Gilded Age California politics was so corrupt that progressive reformers instituted the initiative process, for example, letting anyone with enough signatures put legislation on a ballot. The top-two primary, also used in Washington and Nebraska, comes in part as a tool in the fight against gerrymandering. Like a lot of Californian ideals, the voting system is a little crazy-making and a little noble all at once.

It’s also doomed. In the 1950s the economist Kenneth Arrow set out to find the one best voting method, one election to rule them all. He ended up proving that there wasn’t one. Arrow’s Impossibility Theorem, for which he one the Nobel Prize in 1971, says that outside a two-choice plurality, no good method exists to make a rock-solid social choice.

But that’s democracy for you. We’re not here to make the union perfect—just more perfect.