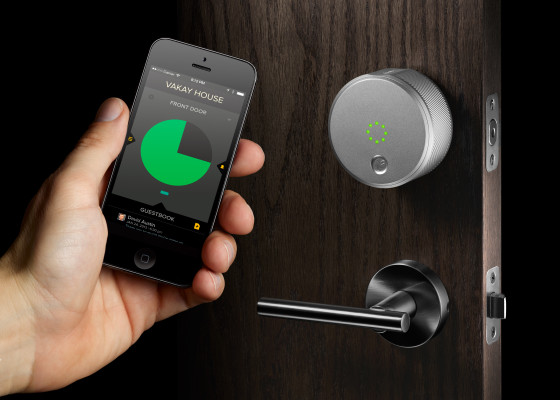 August Lock is getting into the homesharing industry, making the process of checking in an Airbnb guest a bit easier.

Airbnb has done what it can over the past few months to make checking in plain and simple. For example, the company built out a new tool that lets hosts spell out check-in instructions within the app, all in a simple flow, to make sure guests have all the info they need at their fingertips.

But that hasn’t solved the biggest problem of all: the key.

For one, people don’t often have a lot of interest in meeting strangers, especially when they’re fresh off a plane or road trip. Secondly, it’s annoying to block out that time (sometimes getting off work) to go hand off a key to an Airbnb guest. And then there’s the matter of getting keys copied or re-tooling your smart lock to temporarily offer a stranger access.

That’s where August comes in to play.

August lets Airbnb and Homeaway hosts link their accounts to August. When a guest books at their home, August will generate a smart code that lasts for the duration of the stay and no longer, letting the guest easily check-in and come and go without the host having to babysit the process.

Guests will receive their pin code and instructions via email.

This, coupled with other startup services like Handy, should make becoming an Airbnb host as simple as tapping a few buttons.

How Much Weed Should Someone Try If It's Their First Time?

GizmoCrazed - November 22, 2018 0
Our in-house Know-It-Alls answer questions about your interactions with technology. Q: One of my relatives wants to get into cannabis (which is legal in their...

4 of the best high-speed chargers from LinearFlux, all on sale

Private companies could have access to this country's facial recognition database