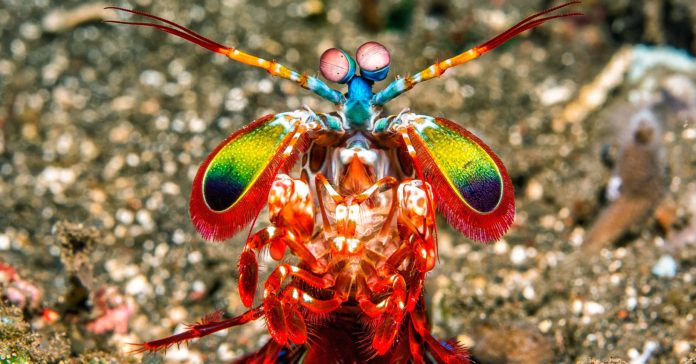 The mantis shrimp is neither a mantis nor a shrimp, but it does wield perhaps the most stunning strike in the animal kingdom. Sitting below its face are two hammers, which the crustacean cocks back and launches at its prey with such speed that it shatters snail shells and tears crabs’ limbs right of their bodies. These things are ornery, and will even fight a human given the chance. For the mantis shrimp, the only tool they have is a hammer, and all the world looks like a nail.

But perhaps that’s not giving the mantis shrimp enough credit. Because like any good scrapper, this critter can’t just throw punches willy nilly—it’s got to strategize. Just how much so, scientists report today in the Journal of Experimental Biology. The first righteous bit: They found that depending on the shape of a marine snail’s shell, a mantis shrimp will change up its punching strategy. And the second bit: The researchers validated these strategies with something called Ninjabot, a machine that replicates the legendary strike of the feistiest crustacean on Earth.

A mantis shrimp’s punch is so fast and powerful, it produces what’s known as cavitation bubbles. When the hammer launches at prey, it develops an area of low pressure, in which vapor bubbles form. These suddenly collapse to release a shockwave that supplements the punch and increases the local temperature up to 8,500 degrees F. That heat is only fleeting, but the strike is so intense, it will often knock prey like crabs out cold.

Snails, though, they’re a whole other challenge for the mantis shrimp. The researchers looked at species with three shell types in particular. The first, known as “low-spired,” is a squat shell with a wide aperture, or the opening where the meat of the snail pokes out. The second, known as “high-spired,” is a much longer, less girthy shell with a small aperture and pointy apex, or tip. And the third is something in between, with a wide aperture like the first, only a bit lengthier.

When presented with a snail with a wider opening, a mantis shrimp attacks that bit relentlessly. “Overwhelmingly they’re just hitting the aperture the whole time,” says Stanford University biologist Rachel Crane, lead author on the new paper. “They rarely hit the apex, and then they also avoid the whorl.” The whorl being the center bit, basically everything that’s not the opening or the tip.

“The story with the higher-spired shells is more complicated,” says Crane. In general, the mantis shrimp tends to start by hitting the opening like it did with the squatter, low-spired shells. But as they work at the shell, they switch to striking that pointy tip. “Which is weird,” Crane adds. “Based on how cracks spread through a shell, it’s unlikely that strikes at the aperture would weaken the apex.”

So what’s going on here? Enter Ninjabot. The machine is set up much like an actual mantis shrimp appendage. It’s got a spring, which stores energy, a hammer, which does the hammering, obviously, and a latch, which lets loose the hammer. With this machine, the researchers could replicate the same forces of a mantis shrimp punch on different parts of the shells, only in a more controlled way. (Good luck asking a mantis shrimp to punch on command.)

What they found is that—as the mantis shrimp’s behavior suggests—the aperture is the sweet spot. “When Ninjabot hit the aperture the first couple of times, the shell would usually break off a little bit, so pieces of the lip would chip away,” says Crane.

But. That success rate plummeted pretty rapidly on high-spired shells with relatively small apertures. “It seems that the aperture with these high-spired shells is a strategy of diminishing returns,” Crane adds. “So they start off and it seems like it’s going to be really successful, but likely due to aspects of the shell’s morphology, that gets less and less successful over time.” So the predator switches from striking the opening to striking the tip.

What the mantis shrimp definitely doesn’t do, though, is switch and strike at the whorl. It’s pretty much indestructible for our boxer, which the researchers also confirmed with Ninjabot. “The easy answer is that the whorls are terrible,” says Crane. “The mantis shrimp never hit them.”

So the mantis shrimp doesn’t just come across a snail and bash the hell out of it at random. It customizes its strategy based on the shape of the shell, like a boxer adapting to different opponents. And like a good boxer, it’s extremely perceptive about its target. Crane isn’t sure yet how exactly the mantis shrimp sizes up the shell—it could be sight or feel or even chemosensory cues. But what’s clear is the predator deliberately takes the snail into its maxillipeds, small appendages it uses to feed, rolling the shell around before jamming it into the substrate and making its strike, which lasts mere milliseconds.

Really, that makes the mantis shrimp more like a patient archer than a boxer. All the aiming and planning and setting up has to happen before the critter releases its strike—it can’t adjust once the hammers are let loose. “It takes a really long time in order for an animal to be this fast,” Crane says. It’s persistent too: The researchers caught one mantis shrimp hitting a shell 460 times.

Far from being a “brute” that its power would suggest, the creature relies on complex behaviors that it adapts to different prey. All the world may still be a nail to the mantis shrimp, but it’s no mere hammer.