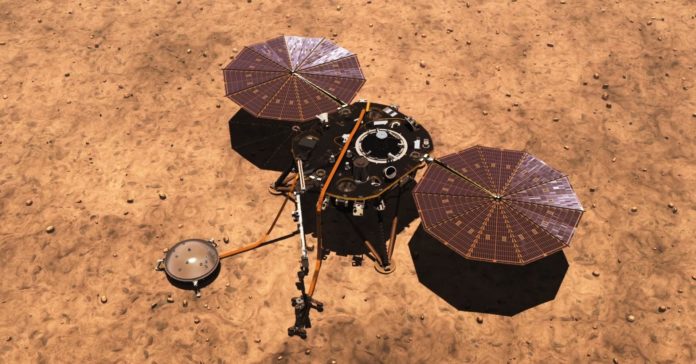 The month-long launch window for NASA’s new Mars lander, InSight opens this weekend. InSight will be the first spacecraft to use a robotic arm to place its instruments on another planet’s soil—effectively unraveling the innards of the Red Planet. It’s also the first interplanetary mission to launch from the West Coast instead of Cape Canaveral, and it may not be the last.

InSight isn’t a rover, like Curiosity or Opportunity, but a stationary lander. Its mission is to peer deep into Mars with two main instruments. One is a probe that’ll hammer 16 feet deep to take the planet’s temperature and determine how much heat it’s losing. (That heat comes from the violent formation of a planet, but also the decay of radioactive elements.) The other is a seismometer for sensing marsquakes. Together, the instruments, which the robot arm will pluck from the deck of the spacecraft, will ideally show what Mars is made of, lending insight (sorry) into not just how the Red Planet came to be, but the history of other rocky planets in our solar system.

First, though, InSight has to get off Earth. Engineers stuck it atop an Atlas V-401 rocket, which stands nearly 200 feet tall and weighs in at 730,000 pounds, including the spacecraft. (By contrast, the world’s largest rocket, SpaceX’s Falcon Heavy, tallies a cool 3.1 million pounds. NBD.) It’ll launch from Vandenberg Air Force Base north of Los Angeles. Why snub Cape Canaveral in Florida, which is traditionally the launch site for interplanetary missions? Because the West Coast is no slouch, is why.

For one, things are busy on the East Coast, thanks in part to satellite-happy commercial outfits like SpaceX. (Cape Canaveral is scrambling to accommodate all those launches, aiming to average a launch a week in the next five years.) Putting a satellite in orbit around our planet is one thing, but Mars spacecraft are extra complicated because they have to launch when the positions of Earth and the Red Planet are just right. “If it’s a planetary mission, you end up with a very short window you have to launch in,” says Scott Messer, program manager for NASA launch services at United Launch Alliance, which operates the rocket. If a primo day opens up, InSight can’t have other peoples’ rockets clogging up the spaceport. You have to go, and go now.

The next consideration, of course, is geography. Cape Canaveral is great for launches because NASA can fire east over the Atlantic Ocean instead of over land. “Because of that, you’re able to take advantage of the rotation of the Earth a little bit more,” says Messer. Planetary physics gives the vehicle a nice little boost on its way into space. Also, you don’t want a malfunctioning rocket falling on a city.

To get that same slingshot effect from Vandenberg on the West Coast, you’d need to fire over the continental US, which … not safe and not allowed. So instead InSight will head south over the waters off Mexico. (Here’s a great video showing the trajectory.) It’ll only head kinda east.

But fear not: It will still most certainly have the power to escape Earth’s gravitational clutches. InSight is a relatively light spacecraft that was small enough to fit on a Delta II rocket, which carried the Spirit and Opportunity rovers. But when ULA procured the mission in 2013, the Delta II was no longer flying from the East Coast. “Because we didn’t have that Delta II capability any longer from the East Coast, we went to our next size vehicle,” says Messer. That’d be the Atlas V-401, which comes with extra power. Thus InSight could launch from the West Coast.

Really, though, it was the crowdedness of Cape Canaveral that moved the mission to California. Right now, Vandenberg launches mostly satellites, at a much less frantic pace than the Cape. (After InSight, Vandenberg is scheduled to send off six more rockets carrying satellites before the end of September. And by the way, regardless of when it launches in its month-long window, InSight will land on Mars on November 26.) But InSight is setting precedent here. “There may be additional opportunities going forward to have larger vehicles launch interplanetaries from the West Coast,” says Messer.

Given the pace of the commercial space race, we’ll be seeing more and more launches around the world. Russia, for instance, has begun launching from a shiny new cosmodrome. In the US, the fact remains that Florida has the right geography both for old folks looking for nice weather and for rocket scientists looking to fire east, and it’s going to stay that way.

That is, until rising seas eat Florida. But hey, maybe by that time we’ll all be living on Mars with InSight.