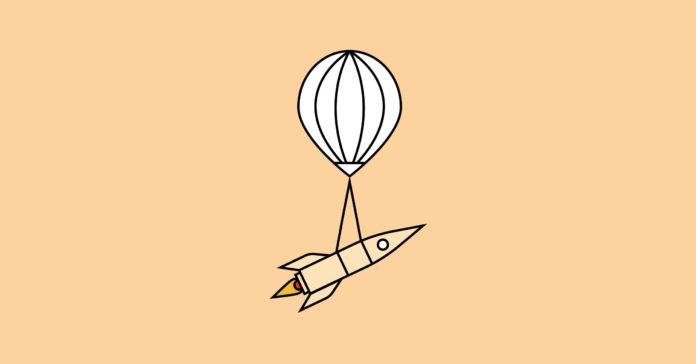 You could be excused, when you first hear Dane Rudy describe his company, for thinking that he wants to use raccoons to send satellites into space. Trash pandas, though, are not the future that Rudy is talking about.

He’s talking about rockoons—rockets launched from high-altitude balloons. Rockoons trace their trajectory back to the military, like the 1950s Air Force program called Farside. (Check out the news anchor’s vintage intonations in this archival video about the program’s fifth—and first successful—launch attempt.)

Rockoons, Rudy believes, deserve a reboot. Through his company, Leo Aerospace, he wants to balloon small satellites into the stratosphere, then shoot them to orbit with rockets. When launched from the ground, rockets require lots of fuel to push through the dense air of those first miles. If another vehicle floats them way up before they have to fire, they can use their fuel for what really matters—getting to space—rather than wasting it on leaving the ground. Right now, small satellites usually have to carpool on serious rockets, with names like Falcon, which is inconvenient, inefficient, expensive, slow—all the things small satellites are supposed to not be.

Last Wednesday, Rudy was in the LA Grand Hotel, surrounded by soft-jazz piano and spiral-arm chandeliers, to try to figure out what rockoons could maybe do for the military. Back in April, the Defense Advanced Research Projects Agency—Darpa—announced that it would hold a “Launch Challenge”: To win, competitors have to launch something small into space two times in a span of weeks.

It’s going to be a bit of a fire drill: Less than a month before the first launch, sometime in the last quarter of 2019, Darpa will tell competitors where it will take place. Then, less than two weeks before go-time, the agency will give them details about orbit, payload, and pad. And then they must rinse-repeat within weeks, with new requirements that they’ll only receive after the first launch. The agency will give $10 million to the first-place winner, plus $400,000 to all who qualify to enter at all, and $2 million to everyone who nails the first launch.

At the Grand Hotel, Rudy was attending Darpa’s “Competitors’ Day,” an opportunity for would-be launchers to come together and get a read on the situation. It’s kind of a PowerPoint-heavy Opening Ceremonies, minus musical numbers, and the ballroom is full of launch vehicle makers, propulsion companies, component constructors, New Space upstarts, Old Space stalwarts, spaceport representatives, and also the guy who sent the first hot dog toward space.

Everyone’s name badge has the same graphic, which looks like a flat plain, edged by mountains. Four rockets launch at once from the landscape, which resembles classic aerospace-innovation geography. It’s Edwards Air Force Base, or White Sands Missile Range. It’s Area 51, or the Academy in Colorado Springs. And toward the end of 2019, Darpa may ask these competitors to launch from federal places like these, or from the commercial spaceports popping up around the country.

At the beginning of the meeting, Todd Master, the Launch Challenge program manager, steps up to a podium. “For a really long time, we’ve enjoyed and benefited from space being a sanctuary,” he says. The guy next to me, who has a Sputnik tattoo on one forearm and an infinity symbol inked on the other, writes something in his notebook.

“That environment has been changing,” he continues. “We’re in an environment now where we view ourselves as threatened in space.”

Here’s part of what this means: More entities than ever can get to orbit. If you can get to orbit, it’s no huge technological leap to trespass onto someone else’s space—by, say, slamming into their satellite. This problem has been part of the space race from the beginning. After all, the reason we invented rockets was to shoot each other with missiles, not because of the romantic human urge to explore the cosmos. And hackers could even target the software and signals satellites send, without shooting anything physical into space in the first place.

One ultra-satellite is vulnerable to take-down, physically or cyber-ly. But if you take that satellite’s skills and disperse them across a network of hundreds or thousands of small, replaceable sats? The flock functions fine even if a few get destroyed or corrupted. And if a big one becomes compromised, you can quickly reestablish its capabilities in miniature. So Darpa hopes the DoD will pivot to constellations of small space objects, sent up so often that the citizenry simply shrugs its collective shoulders at every successful rocket launch. It doesn’t even have to be a rocket. “I don’t care if FedEx is three trucks and two boats and an airplane,” says Master. “Get it there and I’ll pay you.”

The hosts set the crowd loose with an explicit mandate to network. Some attendees have vehicles in the works, while some make only vehicle parts. Some are the taker-carers of logistics. Some are from the spaceports. Few attendees, in other words, have the standalone resources to complete the Launch Challenge. I end up in a gaggle with Rudy. Nearby, someone from Northrop Grumman talks to the founder of Ruckus Composites, a company that mostly does carbon fiber work for the bike industry. But the founder, Shawn Small, is a space geek—he’s the one with the Sputnik tattoo.

Small also makes rockets sometimes, telescopes other times. He sent that first hot dog 22 miles up. Also chicken, on a mission called “A Pollo 13.” He wonders to me, at the end of the day, exactly why Darpa wants this responsive technology. “What do they know?” he asks. As in, what do they know that we don’t.

A lot, probably, about all the things that could realistically go wrong in space. The military mindset is a strange thing, tasking itself with thinking constantly about how we are threatened, or could be. And for Darpa, right now, the way to shrink risk is to shrink satellites.

As I get ready to leave, I ask Rudy if it’s strange, for him, to be thinking about doing defense work (Rudy says he isn’t sure whether Leo will enter the challenge). On Leo’s website, the company describes using little satellites to track crop health, illegal fishing, port traffic. But like all launch technology, rockoons are dual-use. Most space companies—from the big SpaceXs and Boeings to the smaller Planets and Rocket Labs—do defense or intelligence work.

Partly for that reason, Leo Aerospace just went through a national-security-focused accelerator, MD5, to gain experience in navigating the byzantine bureaucratic processes involved in defense contracting. “You learn a lot of things you wouldn’t expect,” Rudy says, when you get into the defense world, but what he has learned has convinced him the sector is “trying to make the world a better, safer place.”

And a more watched one, in which the US doesn’t lose whatever shadow space race is going on. Darpa, in fact, was founded partly because of the surprise Soviet launch of Sputnik—the world’s first (small) satellite. The US, henceforth, would be the surpris-er. So no matter what the agency publicly says about quick-launch and smallsat infrastructure, it surely is anticipating some surprises to come, and planning a few of its own.

GizmoCrazed - April 14, 2018 0
Fasten your five-point harnesses because today we’re going on a trip. We’ll start at our home planet (ok, just above it), where astronauts aboard...

The World’s Smallest 3D Printer Is No Bigger Than A Carton...