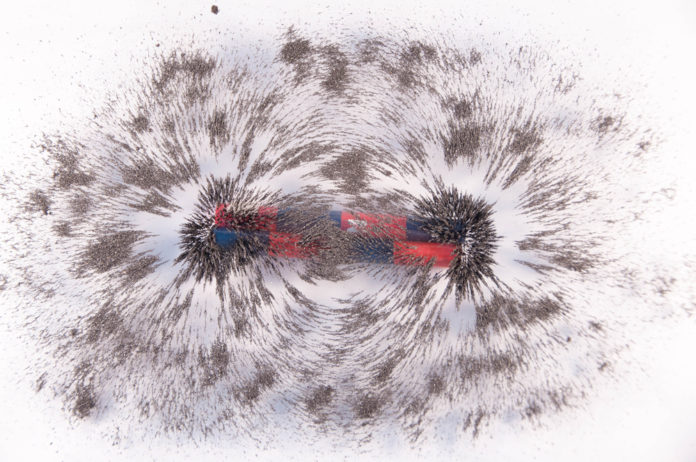 There’s no escaping magnetic fields—they’re all around us. For starters, the Earth itself is like a giant magnet. A spinning ball of liquid iron in our planet’s core generates the vast magnetic field that moves our compass needles around and directs the internal compasses of migrating birds, bats, and other animals. On top of that, ever-industrious humans have produced artificial magnetic fields with power lines, transport systems, electrical appliances, and medical equipment.

We may not be able to see, hear, feel, or taste the magnetic fields that surround us, but some may wonder whether they can still exert effects on our bodies and brains. This question becomes more pertinent, and the answers more tantalizing, as the strength of the magnetic field in question gets cranked up.

A magnetic field arises whenever a charged particle, like an electron or proton, moves around. Since the electric currents running through blenders, hairdryers, and wires in the walls of our homes consist of flowing electrons, they all generate magnetic fields. Through these sources, the average person is exposed to magnetic fields reaching 0.1 microtesla in strength on a daily basis. By comparison, the Earth’s magnetic field, which we are always exposed to (as long as we remain on the planet’s surface), is about 500 times stronger. That means the magnetic force penetrating your body as you lounge around your home or spend a day at the office is decidedly insignificant.

From time to time, a scientific study finds a link between living near high-voltage power lines and illness. Heightened risk of childhood leukemia is the most commonly cited potential health consequence, but whether or not the risk is real has been hard to pin down. One glaring issue is that scientists have yet to figure out the mechanism by which such weak magnetic fields—which are still in the microtesla range for homes next to power lines—could adversely affect the human body. In 2010, the International Commission on Non-Ionizing Radiation Protection concluded that the evidence that living near power lines increases the risk of the deadly blood cancer “is too weak to form the basis for exposure guidelines.” 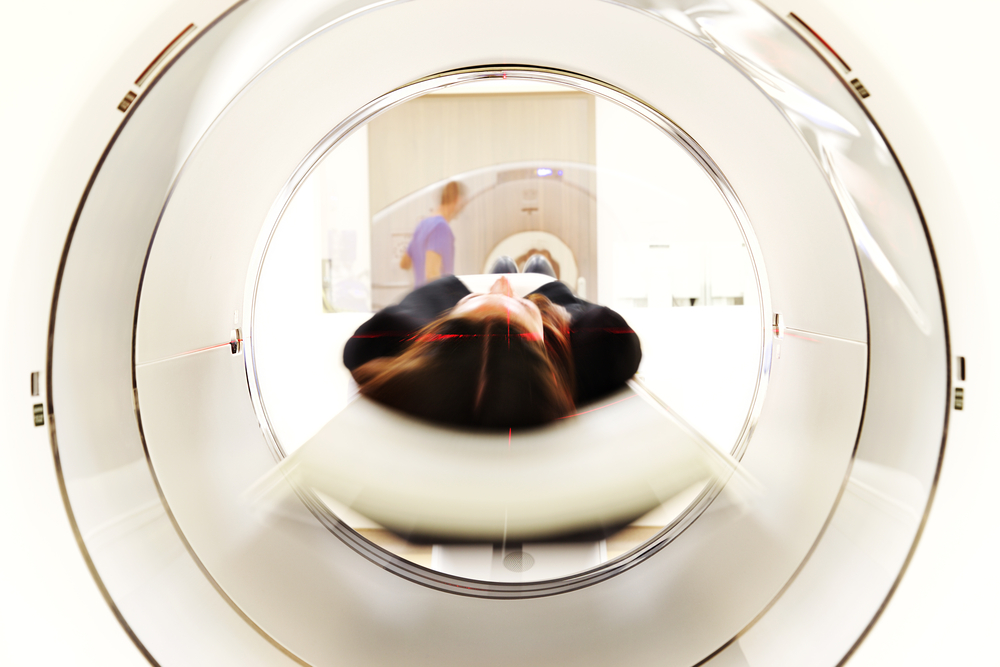 Meanwhile, a team of scientists at the Utilities Threshold Initiative Consortium (UTIC) has been busy working to figure out the threshold at which the human body shows a physiological response to a magnetic field. According to Alexandre Legros, a medical biophysicist at the Lawson Health Research Institute and Western University in London, Ontario and a UTIC scientist, the smallest magnetic field that has reliably been shown to trigger a response in humans is around 10,000 to 20,000 microtesla. But crucially, to produce the effect, the field cannot be static like Earth’s magnetic field; rather, it must change directions over time. When these strong, direction-shifting magnetic fields get directed at a human, small electrical currents begin to pulse through the body. Above that threshold, the currents can stimulate super-sensitive cells in the retina, known as graded potential neurons, giving the illusion of a white light flickering even when the affected person is in darkness; these visual manifestations are known as magnetophosphenes.

The 10,000-microtesla threshold is well above the strength of any magnetic field encountered in everyday life. So in what situations might magnetophosphenes occur?

“There’s only one circumstance in which you may perceive magnetophosphenes,” says Legros: “If you’re in an MRI [magnetic resonance imaging] machine and moving your head fast.” An MRI scanner is essentially a big magnet that produces a powerful magnetic field of around 3 tesla (or 3 million microtesla) — millions of times larger than the fields we’re normally exposed to. But because it’s a static magnetic field, MRI scanners don’t exert any noticeable effect on the body. That would change, however, if the patient inside the scanner were to rapidly move his or her head back and forth. “Moving quickly induces a time-varying field, so by doing that you are inducing currents in different structures of your brain,” says Legros. Those currents may lead to nausea, loss of balance, a metallic taste in your mouth, or in some cases, magnetophosphenes.

On par with the magnetic field of an MRI is the one produced by a medical procedure known as transcranial magnetic stimulation (TMS). But unlike MRI, which makes detailed pictures of the inside of the body, the purpose of TMS is to stimulate the brain. That task requires an electric current, which is why TMS relies on a magnetic pulse rather than a static magnetic field. When this pulse is delivered via an electromagnetic coil placed against the scalp, the resulting current jolts a particular part of the brain with the aim of treating neurological diseases like depression.

The magnetic fields associated with MRI and TMS are the strongest that a human might realistically be exposed to. Still, they are “hilariously puny” compared to those found beyond our planet, says Paul Sutter, an astrophysicist at Ohio State University and chief scientist at the COSI Science Center in Columbus, Ohio. At the extreme lies the aptly-named magnetar, which is a rare type of neutron star with a magnetic field one thousand trillion times stronger than Earth’s. 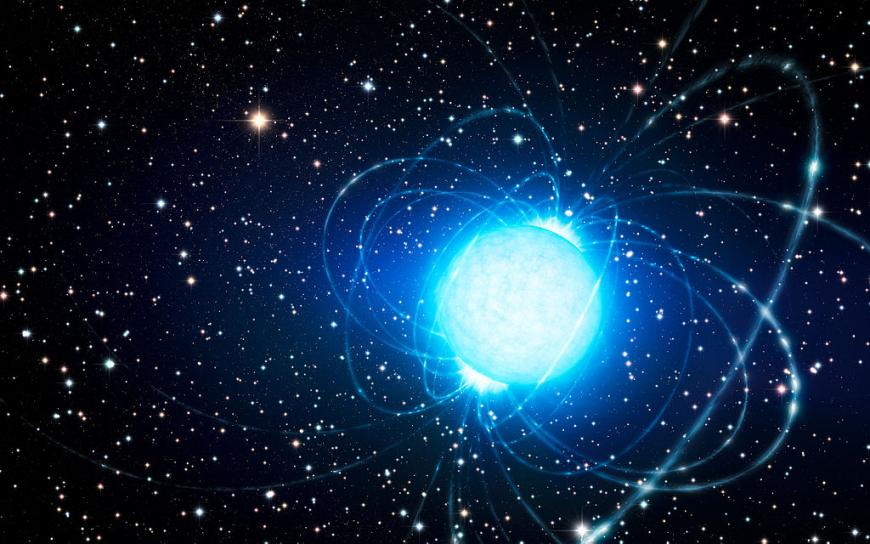 An artist’s impression of a magnetar. (Credit: ESO/L. Calçada/Wikipedia (CC BY 4.0))

If any human ever got close to a magnetar, they would quickly find themselves in dire straits. “Strong magnetic fields can start to do surprising things,” says Sutter. At the atomic level, the strong magnetic field would move all of the positive charges in your body in one direction and the negative charges the other way, he explains; spherical atoms would stretch out into ellipses and soon they would start to resemble thin pencils. That drastic change in shape would interfere with basic chemistry, causing the normal forces and interactions between atoms and molecules in the body to break down. “The first thing you would notice is your entire nervous system, which is based on electrical charges moving throughout your body, is going to stop working,” says Sutter. “And then you basically dissolve.”

Sutter guarantees that our local neighborhood — which he defines as a radius of a few hundred light-years around Earth — has been surveyed and certified magnetar-free. None of these exotic objects are approaching us, and none of the massive stars nearby are likely to turn into magnetars when they die. The nearest magnetar is a safe distance of tens of thousands of light-years away. So, at least for the time being, we can rest easy and take comfort in our planet’s own meager magnetic field.

Recyclable bioplastics cooled down, cooked up in CSU chem lab

GizmoCrazed - December 11, 2015 0
Chemists from Colorado State University seem to have achieved what was not possible according to a number of different journals and textbooks. What have...

10 Uses For Toothpaste You Didn’t Know Before

These are the first cities to get AT&T's mobile 5G

This Is What You Need To Check Next Time You Buy...