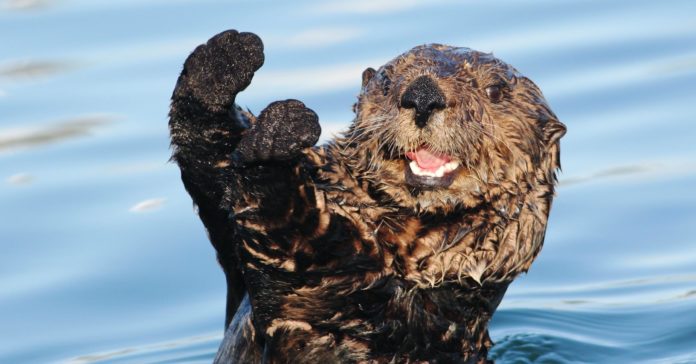 A meme of two angry men recently stampeded across the internet. It’s a scene from the reality show American Chopper, broken out into stacked panels, like a comic strip. The still images are pulled from a scene in which one man is firing the other. Things escalate quickly: Fists are pounded, faces are flushed, fingers are jabbed, chairs are flung.

Like many memes, its particulars matter less than its elasticity. There are zillions of permutations, and one especially notable riff came courtesy of the Monterey Bay Aquarium.

In their version, the meme asks how a conservation agency ought to reach out and connect with people—particularly folks who don’t spend much time worrying about the ocean. “We have to reach people where they are for conservation to break through the noise!” the first panel reads. “This is a really popular meme right now—maybe it can generate a non-zero amount of ocean awareness!” screams another.

On the other side of the country, Mason Fidino, a quantitative ecologist at the Urban Wildlife Institute at Chicago’s Lincoln Park Zoo, was wondering something similar: How should ecologists and wildlife management teams be thinking about the internet, both as a source of information and as a tool to harness in order to get their message out?

Fidino’s training is in statistics, computer programming, and ecology, but he also runs his group’s Twitter account—a side project that no one quite taught him how to do. When the UWI played around the idea of a social media presence, he says, they decided, “Hey, let’s make this thing, and Mason will be in charge of it.” In a new paper, published this week in Human Dimensions of Wildlife, Fidino and his collaborators advance the idea that the nooks and crannies of the web hold useful data points, and maybe a bit of a roadmap.

“When we think about humans interacting with the environment, I think we’re at a point now where we cannot ignore the internet,” Fidino says. “That’s the way that so many people learn about the world around them.” If a raccoon is ambling around your fire escape and peering in your window, for instance, you’d probably consult Google before seeking out a friendly neighborhood zoologist. “As humans and the environment are incontrovertibly linked, so too then are the internet and the environment,” the authors write. That is to say, the web and the offline world coexist as one ever-growing ecosystem.

The videos illustrate a range of scenarios: Some show the mammals being coddled as pets, while others picture them sparring among themselves or being hunted by humans. Each averages more than a million views plus a slew of comments, which the researchers coded into various categories based on an existing typology of attitudes towards animals. These include “humanistic” (cooing over the creatures and wanting to snuggle them as pets), “dominionistic” (emphasizing turf and control), and “negativistic” (the idea that certain animals are simply gross). To control for spammers skewing the results, the researchers only counted a user’s first comment on each video.

Most of the top-viewed coyote videos showed humans hunting them, while the majority of the opossum videos depicted the animals as pets or in captivity. Half of the videos of raccoons cast them as bandits stealing food or otherwise stirring up shenanigans. Dominionistic comments were the most common type on coyote videos. (“Destroy all coyote who ruin deer hunts,” read one.) Humanistic comments were the common responses on the videos of raccoons and opossums—though a sizable share of the latter were negativistic, too. Some people were pretty grossed out by the beady-eyed marsupial.

Fidino acknowledges that YouTube commenters are a self-selected and notoriously vocal bunch, and their views aren’t necessarily representative of everyone else’s. But getting a handle on the prevailing, pervasive ideas that viewers have about different animal species, he says, could help wildlife organizations think about messaging and misconceptions.

“How do we encourage people to be like, ‘Okay, you can take a photo of this animal, but you don’t want this raccoon to be a pet,’” Fidino asks. “Whereas, conversely, with coyotes, it seems like the biggest hurdle that you have to overcome with that is that people are afraid of them.”

The paper doesn’t make any specific recommendations about how wildlife officials should go about becoming more internet-savvy, but Fidino thinks they should give it a shot. “If I went into these [comments] and said, ‘Oh, hi, I’m Dr. Mason, the ecologist, and you probably shouldn’t say that you want raccoons as a pet, and here are some reasons why,’ that probably wouldn’t have much of an impact,” Fidino says. His vision involves messaging on a larger scale—and maybe a more playful one. “Should there be a science center that crafts memes or something?” he says. “I don’t know, but it would be pretty cool, I think.”

The meme approach worked out pretty well for the Monterey Bay Aquarium. Their take—which Fidino describes as “a really awesome example”—was retweeted 44,000 times. Afterwards, the account managers hopped back in to try to redirect some of those eyeballs to the institute’s more-rigorous, less-punny efforts. “Wow, this really blew up,” they tweeted. “Here’s a link to our newest sea otter research paper and a bonus otter gif! Thanks for the love and for doing your part for the ocean!”

GizmoCrazed - May 15, 2018 0
No matter what department you focus on, it's safe to say that they should each be pursuing continuous training in their field to stay up-to-date on...

Where Static Electricity Comes From and How It Works

Dentists Use 3D Printing To Reconstruct A Cancer Survivor’s Jaw