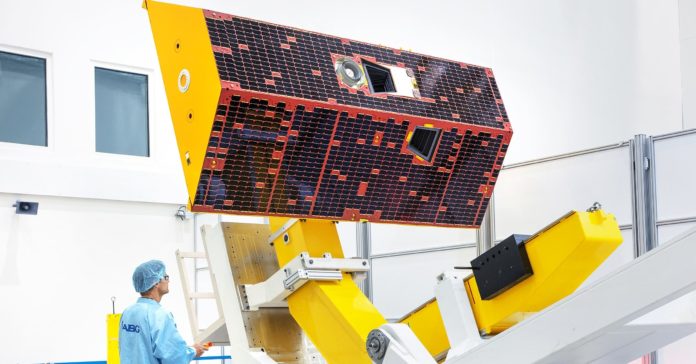 SpaceX is flexing its ridesharing muscles today as its flagship rocket—the Falcon 9—prepares to loft two sets of spacecraft: a pair of Earth-observing satellites for NASA and a set of five Iridium Next communications satellites.

NASA’s identical twin spacecrafts, together dubbed the Gravity Recovery and Climate Experiment Follow-On, will orbit the Earth in tandem, mapping changes in the planet’s water and ice content. The highly sensitive satellites will do this by measuring changes in the Earth’s gravitational field—together helping scientists better understand the effects of climate change and potentially predict future events.

Grace-FO follows in the footsteps of the original Grace mission, which operated from 2002 to 2017. During the original 15-year mission, scientists found changes all around the world, including significant melting of Greenland’s ice sheets. And they’re hoping Grace-FO will provide insight into why these changes are occurring.

To do this, the sports car-sized satellites will orbit the Earth in sync, separated by approximately 136.7 miles—roughly the distance from Los Angeles to San Diego. As they orbit, that distance will shift slightly due to the pull of gravity, which increases over massive regions like mountains and bodies of water. The duo will measure those shifts by beaming microwaves back and forth, ultimately creating a map of Earth’s lumpy, inconsistent gravity field. A secondary instrument onboard will test a new laser communication system; if it works as planned, it will increase Grace’s sensitivity by 10 percent.

The satellites are expected to lift off from Vandenberg Air Force Base in California atop a SpaceX Falcon 9 rocket at 3:47 pm Eastern. After delivering the Grace-FO satellites to their orbital destination 305 miles above the Earth, the rocket will climb to Iridium’s planned, slightly higher orbit—making this the sixth Falcon 9 launch for Iridium.

This launch is a bit unusual for the communications giant, though, as it will only squeeze five satellites on the ride share with NASA. SpaceX’s previous five launches for the company each carried 10 Iridium Next satellites into orbit. This launch will put Iridium’s satellite count at 55, and two more launches on the books with SpaceX this year will complete the company’s constellation, each adding 10 satellites to the tally.

SpaceX’s last launch marked the beginning of a new era of reusability for the commercial space company, with the first flight of its Block 5 booster. SpaceX’s upgraded Block 5 Falcon is expected to fly up to 10 times with only light refurbishments and up to 100 flights before each booster is retired. But SpaceX still has a number of expendable, previously-flown Falcon 9 rockets to use up before we see continuous reflights of the Block 5. Those original rockets were designed to be flown two or three times; today’s booster was first used to launch the highly secretive Zuma mission earlier this year. And the next few launches from the company’s Cape Canaveral launch site will be on flight-proven, full-thrust boosters.

SpaceX doesn’t expect to recover the rocket’s first stage booster today. But it is hoping to salvage an important piece of hardware: the payload fairing. That protective nose cone costs about $6 million, and SpaceX has charged its west coast-based recovery vessel, Mr. Steven, with its retrieval. Mr. Steven was spotted leaving the Port of Los Angeles earlier this week, outfitted with an upgraded net to try and catch the Falcon 9’s payload fairing as it navigates itself back to Earth.

Mr. Steven’s first attempt at a mid-ocean catch back in February was a bust, but SpaceX is hoping that with an upgraded net, this attempt will be more successful.