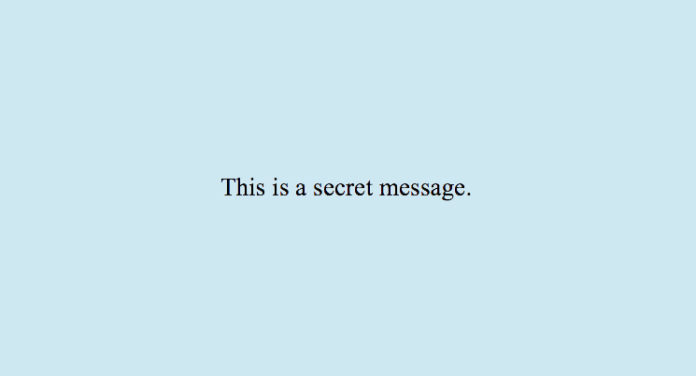 I remember passing notes in grade school. Oh, the thrill of exchanging “secret” messages with friends. In reality, teachers and classmates saw it happening and were probably super annoyed. Not to mention the repercussions if the message were intercepted.

But now, there’s a better way to keep your messages secret. A group of computer scientists from Columbia University created FontCode — a way to unobtrusively hide secret messages in the very shapes of printed letters themselves. That means I could type a note that reads “The dog barks at the full moon” while hiding another message altogether within the lettering. Cool, huh?

It could be useful for protecting copyrights, preventing document tampering and even marketing purposes. And probably save some kids from embarrassment.

“Changing any letter, punctuation mark, or symbol into a slightly different form allows you to change the meaning of the document,” Chang Xiao, the paper’s lead author, said in a news release. “This hidden information, though not visible to humans, is machine-readable just as barcodes and QR codes are instantly readable by computers. However, unlike barcodes and QR codes, FontCode doesn’t mar the visual aesthetics of the printed material, and its presence can remain secret.”

By keeping altering to desired letters minimal, the typeface looks unchanged to human eyes. However, the changes are easily detectable to convolutional neural networks (CNNs) — artificial neural networks that learn. Since the messages would be hidden, FontCode could replace those ugly QR codes that companies still try to push on the public. 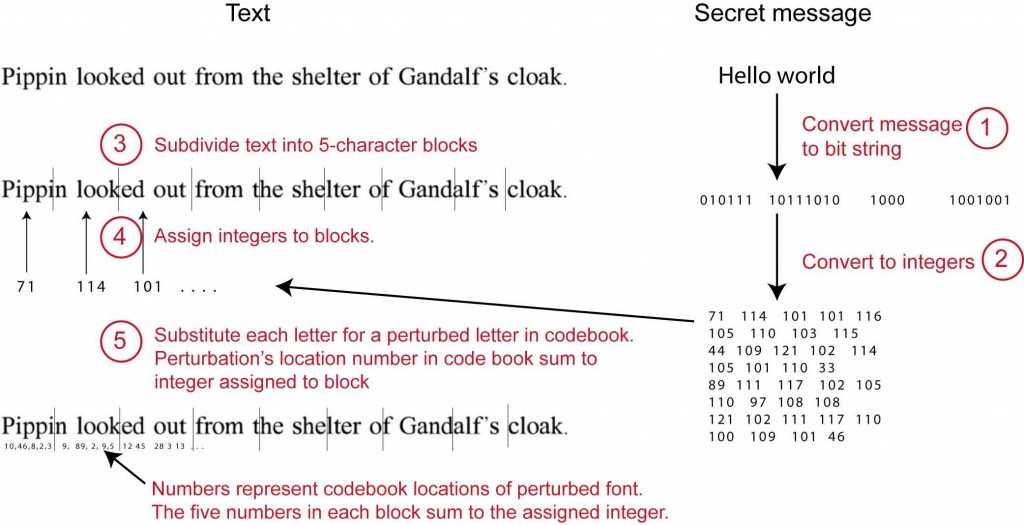 FontCode takes a secret message and converts it so it’s concealed in text. While undetectable to the human eye, computers can easily decode the messages. Above is an example of how it’s done. (Credit: Changxi Zheng/Columbia Engineering)

While FontCode isn’t the first tech to hide messages in text, it is the first to work in multiple formats like PDFs, Word, JPEG, etc. It also works with common fonts including Times New Roman, Helvetica and Calibri. The team is presenting their 2016 paper at SIGGARTH, a computer graphics and interactive techniques conference, in August.

Scientists have found other ways to conceal messages, too. Two researchers from the University of California, Berkeley use machine learning algorithms to recognize speech, allowing for confidential messages to be embedded in audio. Another group of researchers from China use invisible ink (similar to the Marauder’s Map from the Harry Potter series) to hide notes. The lead-based ink can appear and disappear with sprinkles of halide salt.

The future of passing secret messages sure is looking up.

The Cold War Project That Pulled Climate Science From the Ice

GizmoCrazed - June 15, 2019 0
In 1961—the year before he became the anchorman for CBS News—Walter Cronkite visited Camp Century, an unusual military compound on the Greenland ice sheet....

The Guardian hilariously roasts Mark Zuckerberg in 2018 'year in review'...