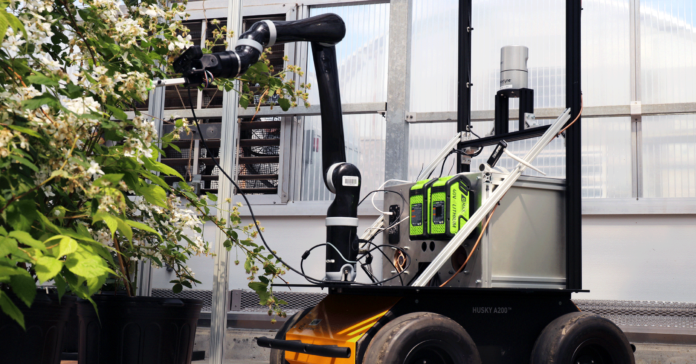 You like eating, yes? Apples, oranges, berries? For these foods we can thank bees and their extraordinary pollinating powers. Unfortunately, to show our appreciation, humans are killing off bees in staggering numbers—destroying their habitats and poisoning them with pesticides. And at the same time, our population is skyrocketing, which means if we can’t get our act together, we have to somehow feed more people with fewer pollinators.

Well, living pollinators, that is. In a greenhouse at West Virginia University, a machine called the BrambleBee is learning to roll around pollinating blackberry bushes, knocking their flowers around (blackberry flowers self-pollinate, so bees or robots just have to jostle them to spread around the pollen). It’s no replacement for bees, but in a world with too many humans and not enough pollinators, robots like this could help feed our kind.

The BrambleBee works not unlike a self-driving car. First it uses lidar, spraying lasers to build a 3-D map of the greenhouse so it can find its way around. For the moment, it looks for QR codes as a stand-in for flowers, but the researchers are close to getting it to snap photos of actual flowers. After traipsing through the rows, it then plans its next pass to reach as many flowers with its arm as possible. Next, once it’s positioned itself in front of a plant, another camera on that arm will make an even higher-resolution 3-D map of the crop.

If BrambleBee determines a flower is ready for pollination, it will use a small 3-D printed brush of flexible polyurethane bristles on the end of its arm to gently stroke the blossom. This transfers pollen from the male reproductive organs, called anthers, to the pistils, where pollination commences. The robot will even remember what flowers it already hit, so it can make multiple runs as the plants mature in the greenhouse.

Is it more expensive than helping bees do their thing? Certainly. Does it get insects fed? Certainly not. But BrambleBee can provide something bees can’t: data. “Imagine you recognize a blackberry from the stage of a bud all the way to a fruit, then you can tell how many blackberries to expect and what their quality is,” says West Virginia University roboticist Yu Gu, who developed the system. And if BrambleBee can manage a manipulation as delicate as pollination, theoretically it could tend to the plants in other ways, like using a different instrument to cut away unhealthy flowers.

But, again, this machine is nowhere near a replacement for bees. Over 20,000 species of bees fly the Earth, with unique bodies and strategies for collecting pollen. “One human-engineered robot cannot improve on bees’ almost 100 million years’ worth of evolutionary ingenuity,” says University of Minnesota entomologist Marla Spivak. “We need to figure out how to protect bees, not replace them.”

Plus, BrambleBee’s stature means it’s no good for tree crops like almonds. And plants that don’t self-pollinate are going to be trickier. Humanity still needs bees, and policy changes and research to try to save them.

And you’d have to put out a lot of pollinating robots to make a big impact. “I think it’s very hard to imagine a future where robotic pollinators play a significant role in supporting food production to compensate for bee declines,” says Harvard biologist James Crall, who studies colony dynamics by gluing QR codes to bees and tracking them with a camera. “In addition to honey bees, there are thousands of bee species across the globe that are crucial to supporting both crop yields and maintaining biodiversity.”

But just as beekeepers rent out their hives to farmers to kickstart pollination, so too might robots like BrambleBee travel between farms to lend a hand, or labor full-time in greenhouses. Maybe BrambleBee could work alongside bees with less disruption compared to, say, tiny pollinating drones that might end up injuring bees.

So yes, humanity must save the bees. But to feed our species, perhaps the farm of the future could use a robotic hand or two.

GizmoCrazed - September 29, 2017 0
(Credit: Shutterstock) Eating is one of the great pleasures of life. But eating too much places people at risk for chronic illnesses and shortens life...