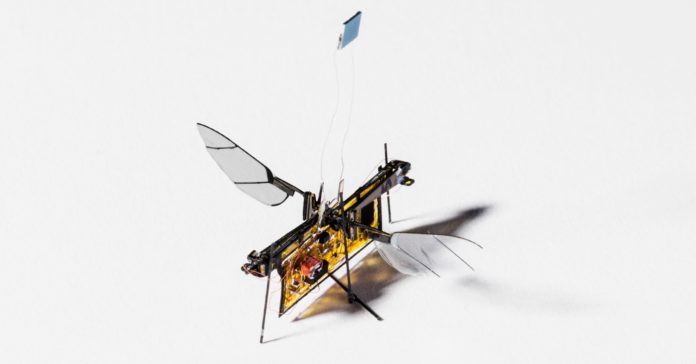 In 1989, two MIT artificial intelligence researchers made a terrifying prediction. “Within a few years,” wrote Rodney Brooks and Anita Flynn, “it will be possible at modest cost to invade a planet with millions of tiny robots.” Their paper “Fast, Cheap and out of Control: A Robot Invasion of the Solar System,”, argued that small, autonomous “gnat robots” would soon become cheap enough to solve problems en masse.

Nearly three decades later, those millions of tiny robots have yet to take over, at least not exactly like Brooks and Flynn envisioned. While they were right in some ways—the world has more than 700 million active iPhones—the vision of the fast, autonomous, tiny, buzzing bot is still a dream. Fly-sized bots have mastered liftoff, flight, landing, but all while bound to an outside power source. That is, until now.

Sawyer Buckminster Fuller, a mechanical engineering professor from the University of Washington who is not related to the inventor of the geodesic dome, announced on Tuesday that his lab has freed this humming device from the wires that have constrained its range and movements. Instead, the robot has a tiny photovoltaic cell—a mini solar panel—that takes in power from a laser.

Sawyer wanted to follow biological principles, which meant deviating from mankind’s most useful invention—the wheel. Most modern electronics, such as the electric engine, rely on some sort of rotary motion. Biology, on the other hand, usually involves more of a undulating pattern. For example, try making a wave with your arms. Next, try to imitate a spinning wheel. Actually, don’t do that, it’s painful. Sawyer’s bot has the rapid wing-beating motion of a hummingbird rather than a helicopter.

Though the small scale means that the faux-biological design takes up less power than an equivalent motor, the robot still uses a lot of power. There are no commercially available batteries that produce enough juice to power flight—the batteries for hearing aids are the right size, but too weak, according to Sawyer. The laser delivers a higher voltage than what comes out of a US electrical outlet, and only a small percentage of that actually gets to the device. “It’s a pretty inefficient way to get power to the robot, but the robot doesn’t take much power,” says Sawyer.

Now, just because this bot is no longer bound by a wire doesn’t mean it’s going to replace the bees that pollinate your apple orchard. The laser has to be less than seven feet away from the robot in order to give it enough power. And beams of light, unlike wires, are hazardous to human eyeballs, which means that these bots are not going to be free to play Johnny Appleseed any time soon.

The whole robot is just slightly heavier than a toothpick.
Mark Stone/University of Washington

Outside the lab, insect-sized autonomous robots could prove as practical as their larger counterparts, the drones. Scientists are not likely to solve the power problem any time soon, but these bugs can still be useful in short bursts. Their hoverability allows the bug bots to go on reconnaissance missions that the bigger robots are not well-suited for. “You could take a bunch of them, disperse them to gather local data, and go back to the mothership,” says Xinyan Deng, a bio-inspired robotics researcher at Purdue University.

The robots of the future could perform surveillance, track down pollutant leaks, and perform search and rescue missions in small, confined spaces. “Nature has evolved for so many millions of years,” says Deng. “We can learn a lot from nature and build these systems to achieve certain goals.” Insects have had 400 million years to evolve—it may take roboticists a few more years to develop equally invasive tiny robots.