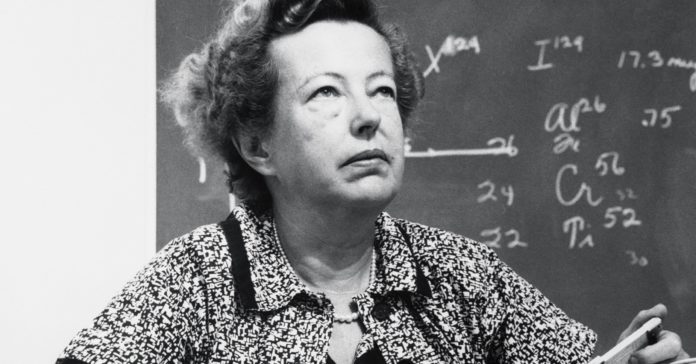 We scientists are pretty good with numbers. Whether it’s tallying the number of galaxies in the universe or probing reagent reactions that last mere femtoseconds, nothing quantitative seems beyond our reckoning. But lately it seems that scientists have gotten little too comfortable with some very small numbers.

Take the number of women in the science, technology, engineering, and mathematics fields. Even though young girls today perform similarly on STEM assessment exams as boys, far fewer girls, compared to boys, consider STEM careers. Currently, women make up only 20 percent of physics faculty at US universities. What causes the STEM pipeline to leak female minds so egregiously?

Perhaps it’s the drain of potential female role models who deserve to win the Nobel Prize, but fail to receive science’s ultimate accolade. Children yearn for role models. In music and movies, sports and politics, heroines (and heroes) can catalyze early interests and spark lifelong ambitions. Awards capture attention in any field, and the Nobel Prize conveys unrivaled authority both inside and outside of science. Within the halls of academia, Nobelists receive increased funding, citations, and other prizes.

Unfortunately, there have been only two more female physics Nobel laureates than female Popes. Even when the first woman, Marie Curie, won the Nobel Prize in Physics in 1903, she was grudgingly granted it after protestations by her co-laureate husband, Pierre Curie.

Following Madame Curie’s Nobel Prize, a 60-year drought of female laureates lasted until 1963, when the University of California at San Diego’s Maria Goeppert Mayer became the second and, to date, only other female physics prizewinner. Even though she won the coveted award, a local newspaper headlined Goeppert Mayer’s win as, “San Diego Housewife Wins Nobel Prize.”

Sadly, the lack of female Nobel physics laureates persists 54 years later. The lack of female Nobelists sends a powerful message of devaluation to aspiring female STEM professionals. When women fail to enter these fields, society misses out on their contributions and younger women are denied important role models.

This role-model deficit tracks an historical pattern in the sciences. Take Margaret Burbidge, who made history as the first female astronomer to become a member of the National Academy of Sciences in 1972. She also became the first female director of the Royal Greenwich Observatory in that same year.

Theoretically, her post at the observatory should have automatically made her the first woman elected as Astronomer Royal. Instead, she was the first astronomer in 300 years to direct the Royal Greenwich Observatory and not be named Astronomer Royal. That title went to Martin Ryle who, two years later, went on to win the 1974 Nobel Prize, courtesy of a discovery made by a male colleague’s female graduate student, Jocelyn Bell.

While Bell, who serendipitously discovered pulsars—stellar coffins which emit bursts of radio energy so punctiliously you can set your smartwatch to them—could get a pass for being bitter, she instead remained equanimous, explaining her lost prize as a symptom of ageism: “I believe it would demean Nobel Prizes if they were awarded to research [i.e. graduate] students,” Bell said at the time. “Finally, I am not myself upset about it—after all, I am in good company, am I not?”

If by “good company” Bell meant graduate students who did Prize-worthy work but lost the Nobel, unfortunately, there are many counterexamples to her assertion. Both before and after her discovery, male graduate students often won the prize, including one who studied pulsars.

Outside of physics, women in other fields have hardly fared better in Stockholm. Worse yet, not only have women lost out on Nobel Prizes, but they’ve also been cheated out of credit for their work, often due to revisionist history.

Rosalind Franklin unlocked the secrets of DNA’s double helix structure courtesy of her work on X-ray crystallography. Her meticulously kept records show that, in early 1953, she concluded that DNA must be a double helix. While James Watson and Francis Crick also were coming to that conclusion, they lacked data to support their hypothesis. Luckily for them, and unbeknownst to Franklin, the male duo gained unauthorized access to both her data and one of her unpublished reports, enabling them to rapidly complete their similar model of DNA. Later in 1953, their findings were published by Nature, and they, along with Wilkens, went on to win the 1962 Nobel Prize in Physiology or Medicine. When they accepted, the male scientists hardly mentioned Franklin.

Watson and Crick’s names are inextricably linked to the discovery to this day. This is due, in part, to Watson’s epochal book The Double Helix, in which in addition to the victory lap discussion of his and Crick’s findings, Watson diminished Franklin’s contributions, further reducing the credit she deserved and enhancing the Matilda effect. Franklin died fighting for research funding in an under-equipped lab, while Watson and Crick went down in scientific history.

Lise Meitner is another widely-recognized example of the Matilda effect. Meitner was an Austrian physicist who, in 1939, unequivocally demonstrated evidence for nuclear fission. She received many accolades for her work, but she missed the chance to win the greatest prize of all. Her male colleague Otto Hahn, in contrast, won the 1944 Nobel Prize in chemistry.

Vera Rubin was another deserving female scientist who never received a 3 a.m. call from Sweden. In the 1970’s, Rubin provided conclusive evidence for the existence of dark matter. When, in 2011, the Nobel Prize in physics was awarded to three men for the discovery of dark energy from observations of distant supernovae, based on research conducted in the late 1990’s, Rubin’s Nobel seemed imminent.

But for five years Rubin waited. There was much debate as to why Rubin was denied the prize. Some attributed it to her failure to interpret her observations. Others argued that she’d discovered a phenomenon whose underlying cause was not understood. But these Nobel-busting reasons apply equally to dark energy’s discoverers, too.

According to the rules of the Nobel Prize Foundation, last modified in 1974, Rubin’s death on December 25, 2016, forever renders her ineligible. However, this posthumous prohibition has been overlooked several times in the past—for deceased male laureates.

Unlike the pretext forbidding Rubin’s rightful claim, Bell is thankfully still alive and continues to rack up awards, though none as prestigious as the Nobel (even though nothing in the Nobel statutes precludes her from winning one).

In business, workers are rewarded financially. In academic science, remuneration comes in the form of citations to published papers, promotions, and awards. Companies are working hard to close the wage gap between the salaries their male and female workers earn. Exact figures vary, but it is generally agreed that women make approximately 80 percent of what their male colleagues earn. As unacceptable as it is, this figure is 10 times narrower than the Nobel Gap. Women represent less than two percent of Nobel Prize winners in the three most quantitative Nobel fields: chemistry, economics, and physics.

After she won science’s most coveted award, Goeppert Mayer said, “Winning the prize wasn’t half as exciting as doing the work itself.” But winning the prize can inspire and motivate young scientists—females included. The Nobel Prize is humanity’s superlative award and as such, the list of winners should accurately reflect the diverse panorama of modern science.

The ways to expand this list and close the Nobel gap do not require esoteric mathematical gymnastics. Merely by eliminating the prohibition against posthumous prizes and giving prizes to deserving scientists who were victims of the Matilda effect would rectify mistakes made by past Nobel Prize committees. Lastly, reorganizing and increasing the participation and leadership of women in academia—especially within the Swedish Royal Academy of Science—would see the Nobel Prize’s luster use to bridge the Nobel gap, before it becomes a chasm, restoring the prize as a beacon of light for all scientists, regardless of gender.