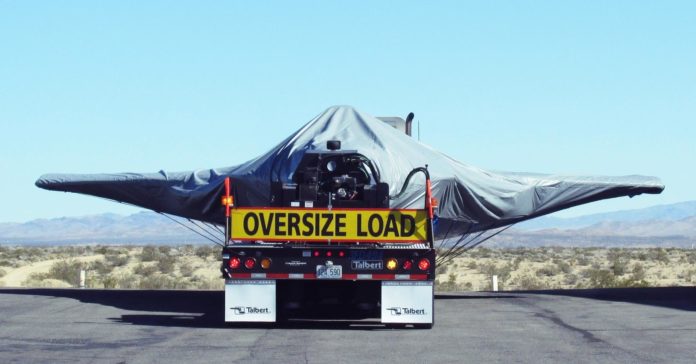 When I ask Bradley Worthington to tell me about that one time people in the southwest thought his trucking company, McCollister’s, was moving a UFO across the country, he laughs. There’s not a “that one time.” “It happens frequently,” he says, “especially with oversized things.”

And McCollister’s hauls a lot of oversized things. From astronaut capsules to weather-monitoring satellites to military aircraft, the company specializes in moving beefy, sensitive objects around securely. They’ve transported part of Orion, NASA’s next astronaut-carrying spacecraft, and the recently-launched Joint Polar Satellite System-1, an environmental-monitoring system.

Worthington does, though, know the one time I’m talking about. It was when his driver transported an F-35 jet model from California to Texas. The big-rig took a break in southern New Mexico, where passersby saw it carrying a saucer-looking craft covered in a metallic shroud—which, when illuminated, beamed like something otherworldly. “It looked spaceship-ish,” Worthington concedes, especially in a landscape long home to classified aerospace tests and undisclosed military experiments. “Everybody’s got their ideas,” Worthington says. “And if you stop for any reason, people want to know which UFO you’re transporting.”

Their confusion makes sense, in a way. “You don’t get a chance that often to see things going down the highway that aren’t farm equipment or wind turbines,” says Worthington. But that’s exactly the business McCollister’s is in. Satellites, rockets, and jets don’t always lift off from the same places where they were built. And when it’s time to make that big move, McCollister’s big-rigs are here to help.

Worthington worked for Lockheed Martin for 35 years, in its space systems division. In 1995, he took over the transportation group, sometimes employing McCollister’s to move its precious cargo. Companies like Landstar, Bennett Motor Express, and VIP Transport also offer aerospace-shipping services. But when Worthington retired from Lockheed in 2016, he agreed to become vice president of McCollister’s aerospace and defense arm.

The company actually started its high-tech transportation in the ’70s with supercomputers—big IBM racks. But at an aerospace trade show in the ’90s, an industry insider came up to McCollister’s booth and described a “mishap with a transportation event.” The guy’s (classified!) cargo was in the back of a truck when the connection between tractor and trailer failed, shaking up sensitive equipment. McCollister’s team started looking into how to mistake-proof that connection point: kingpins that lock, connections that rely on sliding bars or clamp down with metal jaws.

Decades later, McCollister’s agents have gained a reputation for not dropping or shaking stuff that’s spent years in development—like NASA’s Orion crew capsule. In 2016, soon after Worthington started his new gig, McCollister’s was tasked with moving part of the structure from Southern California to Colorado. Orion wasn’t just an oversized load: It was a “super load”, at 19 feet wide (your car, in case you haven’t measured it lately, is likely around six feet wide).

Whenever you’re moving something that is that big and that touchy, there’s a lot to consider: the spacecraft’s shape, how hot and cold and humid the air is, how much vibration is happening. And once a wide load like Orion gets on the road, the driver can’t just toodle around, stopping at diners and “world’s largest” food statues. Every state such a truck passes through requires a permit, and a route planner determines which roads have overpasses too low or lanes too narrow. For super loads, an actual human surveys the route. If anything about the cargo is classified, the company taps drivers with security clearance, of which McCollister’s has 12.

And, finally, McCollister’s must pick out Safe Haven spots, big enough that the driver can stop and check that a future astronaut habitat is nominal (and maybe sleep and pick up a five-hour energy shot). After all, not all exits have parking lots big enough to accommodate Orion’s berth. The trip went off without any hitches.

But that’s not always the case. Last fall, McCollister’s had to move NASA and NOAA’s Joint Polar Satellite System-1 satellite from Denver to Vandenberg Air Force Base. Bart Cosart, a NASA contractor at Ball Aerospace who works on mission assurance, was one of four chaperones who rode behind the big truck … in a coach bus, like a spacecraft roadie. “The trucks starts up,” says Cosart, “and you start rolling out with a couple billion dollars’ worth of satellite.” They’d all be rolling, McCollister’s estimated, for about 36 hours. But it turned into more like 50.

Just 50 miles out, during a stop, someone noticed that one of the environmental control units—which the federal agencies had supplied and which keep the satellite’s surroundings stable—was throwing an error message. The satellite, which helps severe-weather prediction and environmental-hazard tracking, could be severely damaged by swings in heat and humidity. The team knew that it was going to be 85 or 90 in Nevada, and what if the backup system failed, too?

McCollister’s called a servicer, who met them along their route and made it all better. Until, that is, they stopped for gas in Nevada. Just a few miles after leaving the station, the truck had a problem. Luckily, the bus contained Ball employees who had built the satellite’s components, like the ozone mapping profiler. “One of the Ball mechanical technicians crawled up under the truck,” says Cosart.

It all ended fine, just later than expected. Which can be a big deal when your cargo is en route to a space launch. Every liftoff has a window of opportunity. If a vehicle doesn’t make it to the spaceport in time for prep, the window will shut on their fingers. For vehicles like NASA’s planetary spacecraft, that window might not open again for a while, as it’s “predicated on how the stars align, quite literally,” says Worthington.

There’s that saying: “It’s not about the destination; it’s about the journey.” And that may be true for, you know, life. But for spacecraft-hauling trucks, it’s definitely about both.