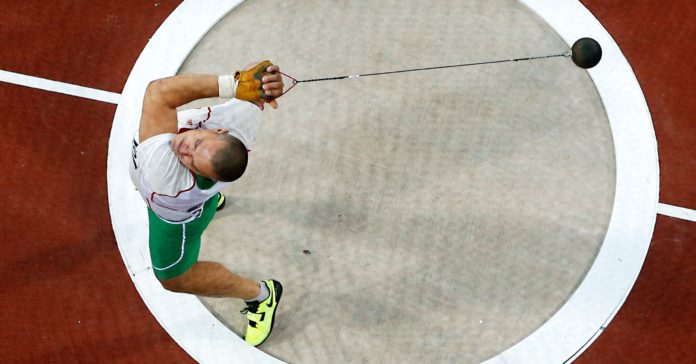 Occasionally there are physics lab demonstrations that I think are pretty awesome but that my students just think are “meh.” This is one of those cases. The basic idea in this demo, which I used in my class at Southeastern Louisiana University, is to swing a mass around in a horizontal circle. But wait! There’s a cooler part: By running the string through a vertical tube and attaching it to another mass, we can control the tension in the string. It’s loads of fun.

What am I talking about? Maybe this will help.

Yes. That is me. I have a confused look on my face because I have to concentrate to keep the swinging length constant. Maybe this is why the students dislike this lab. Oh well. There are a few important features of this swinging mass. Let me draw a diagram.

If you want to swing the mass around with a lower angular velocity, the string will need to be longer. If you want a shorter string, the mass will have to spin around faster. This is the only way to make it work since the tension in the string is constant. Why is the tension constant?

Consider the mass hanging down at the bottom of the tube (I have labeled this M2). Since this mass is just hanging there (and not spinning in a circle) then it is in equilibrium with an acceleration of zero meters per second squared. Since the acceleration (in the y-direction) is zero, then the net force must be zero Newtons. There are only two forces in the vertical direction, the downward gravitational force with a magnitude of M2g (where g = 9.8 N/kg) and the upward tension (T). That means the tension has to have a value of M2g—no matter how you are swinging the other mass.

What about that angle that the string makes as the mass moves around in a circle (labeled as θ above)? How does this angle change as you swing at different speeds? Let me start with a force diagram for mass m1.

Although this mass is moving in a circle, it’s just a horizontal circle. There is no motion and no acceleration in the vertical direction. This means the net force in the y-direction must be zero. Looking at the tension, the component of tension in the y-direction depends on the magnitude of the tension (which I already know) and the angle (which I don’t). I can write this as the following equation.

Using the value of the magnitude of the tension (from before), I get the following expression for θ.

That’s it—θ. It doesn’t even depend on how fast you swing the mass or the string length. That sort of seems crazy, but it’s true. Since the tension in the string is constant and the vertical component of the tension force must be constant, the angle must also be constant. Let me just check with a quick measurement. Here are two swings with the same masses, but different lengths.

From this, it seems I get 30.4° and 22.8°. That’s not exactly the same—not quite sure why there is such a difference. One problem might be that I am not exactly swinging it in a horizontal circle. Maybe I will have to do a bit more exploration here.

OK, there is one more thing to look at. What about the relationship between the angular velocity and the length of the string? Looking at the force diagram above, there is only a component of the tension force acting in the horizontal direction. This means the net horizontal force can’t be zero. In fact, it has to be equal to the mass (m1) multiplied by the acceleration. In this case, the mass is accelerating to the right since it is moving in a circle. The circular acceleration would be the product of the angular velocity squared (we like to use the symbol ω for this) and the radius of the circle. Notice that the radius of the circle is not the length of the string—instead it is the length of the string multiplied by the cosine of θ (to get that adjacent side of the triangle). Putting this together, I get the following.

This equation says that the square of the angular velocity should be proportional to one divided by the length of the string. That seems simple enough to test. All I need to do is to swing the mass around with different length strings (the length from the top of the tube to the mass). I can do this by watching a small piece of tape at the bottom of the tube to make sure the length is constant. Of course I need to also keep the masses constant. I can determine the angular velocity by measuring the time it takes the mass to make one rotation. The angular velocity will then bey 2π divided by this time.

I did this for five different lengths using a hanging mass of 50 grams and a swinging mass of 15.8 grams. Here is a plot of ω squared vs. 1/L:

That looks fairly linear. But the important part is the slope. Looking back at the relationship between ω2 and 1/L, the proportionality constant should be M2g/m1. I know the masses and I know g, so this constant should be 31 m/s2. The linear fit has a slope of 43 m/s2—so not quite the same, but still close.

Still, if this was a student lab report, I think that data would be acceptable. I’m still slightly concerned that the swinging angle isn’t constant and this slope isn’t closer to the expected value. I have a feeling that there might be some friction between the string and the rotating glass rod. Friction at the contact point would mean that the tension in the string at the swinging mass is not M2g, but something else. Maybe I need to come up with a different method to measure the tension.

Honestly, this is a great reason why you should always work through the lab experiments—even if you are pretty sure you know how stuff works. You just never know how things will turn out.

GizmoCrazed - December 8, 2017 0
Samir Arora says it’s time for a new wave of applications that use reliable location data.Arora previously founded Mode Media (which he departed before...

Pictures Of SuperMoon From Around The World