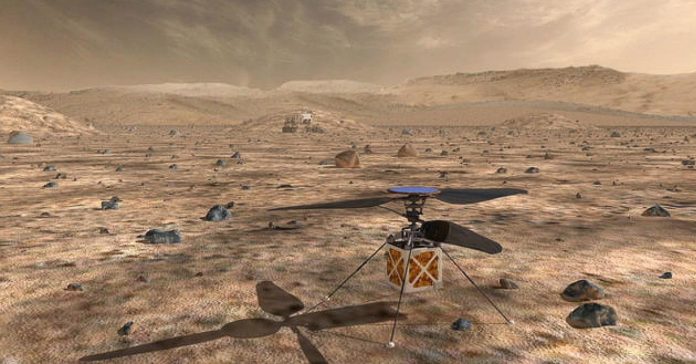 Sending a rover to Mars is cool—but sending one to Mars along with a helicopter is even better. Yes, that is the plan for the next NASA Mars rover, scheduled for 2020. The idea is to have a driving rover that brings along a small coaxial helicopter. The helicopter will be self-powered and fly for a few minutes a day. The main advantage of the helicopter is that it can scout ahead of the rover and take pictures and stuff—maybe some epic rover selfies. But really, it should be a huge advantage over previous rovers.

Besides being a cool Mars mission, this Mars helicopter is also perfect for some physics questions. Here are some questions and answers regarding this flying robot.

Why doesn’t it have a tail rotor?

The Mars helicopter is not your traditional helicopter. For a helicopter with a single rotor (like the ones you usually see on Earth), the tail rotor is required to counteract the change in angular momentum (and the frictional torque from the air) due to the main rotor spinning. Without the tail rotor, the helicopter would spin out of control and crash—or at least get the passengers very dizzy. A coaxial helicopter has two counter rotating blades. Since the two rotors are spinning in opposite directions, the total angular momentum is zero and there is no need for torque from an extra tail rotor.

Getting rid of the tail rotor also does something else—it saves space. You can make a smaller helicopter by using a coaxial rotor. Smaller is better—especially with the limited space on board the rover. Getting a bigger helicopter on the rover would be like trying to fit an overstuffed rolling suitcase in the overhead bin on your last cross-country flight. Also, I should point out that the Mars helicopter doesn’t go back to the rover, but it does start there.

Will a helicopter work on Mars?

With regards to helicopter flight, there are two big differences between Earth and Mars. First, the density of the atmosphere on Mars is significantly lower than on Earth (only about 1 percent of our atmospheric density). Second, the gravitational field is also lower on Mars (just 38 percent of the gravity on the surface of the Earth). The lower atmospheric density makes it more difficult to fly a helicopter, but the lower gravity makes it easier.

The real question—how do helicopters fly? In a very basic model of helicopter thrust, the rotors take air above the helicopter and throw this air down. Since the “thrown” air has an increase in momentum, this requires a force—which is the lift force. Also, we can imagine this mass of air is in the shape of a cylinder with the radius of this air-cylinder the same as the area of the helicopter rotors.

The momentum of the downward thrown “air” (I’m going to use air for the stuff on Mars and Earth) depends on the speed that it’s moving down and the mass. But what about this mass of air? Since the thrust force depends on the rate of change of momentum, I don’t actually need to know the height of this cylinder of air.However, the rate of change of air-mass does indeed depend on the size of the rotors and the density of air. From that, I can get the following rough approximation for the thrust force from a helicopter.

You can probably guess that the A is the rotor area and v is the speed the air is pushed down. The density of air is represented by the Greek letter ρ. But what about gravity? Well, if the helicopter is to hover then the thrust force must be equal to the weight. We can calculate the weight as the product of mass (m) and gravitational field (g).

Since the air density on Mars is just 0.01 that of on Earth but the gravitational field is 0.38 as much, the lower gravity benefit does not match the loss in air density. It’s more difficult to hover on Mars than on Earth. Oh, please notice that this is just a rough model for the thrust force from a helicopter. Please do not use this calculation to attempt to build your own human-carrying helicopter. However, you could use it to calculate the correct size of the S.H.I.E.L.D. helicarrier rotors.

Actually, here is a quick homework question for you. Based on the known mass and size of the Mars helicopter, what is the air speed from the rotors in order to make this thing hover?

What about the flight time?

NASA says that the Mars helicopter will be able to fly for about two to three minutes per day. The rest of the time, it will use its solar panel on the top of the vehicle to recharge the battery. So, how big of a battery does this thing need? There are actually two ways to estimate the battery size (other than asking NASA—that’s the boring way).

The first method considers the charging time. Basically, this thing will recharge for a whole day. On Mars, each day is almost exactly the same as an Earth day (but 37 minutes longer). But the total day doesn’t matter—what matters is the length of sunlight time. Just like on Earth, the length of daylight on Mars changes with the seasons. So, let’s just estimate that the sun is visible of 10 hours a day (I just picked that for fun).

The next thing to determine is to think about the solar irradiance. This is the power per unit area that the is in the light reaching the surface of the planet. For Earth, this has a maximum of about 1,000 Watts per square meter. On Mars, it’s only about 2590 Watts/m2—but remember that is the maximum. Over the course of a day, the sun appears to change position. If you have a static facing solar panel, the average irradiance will be smaller. I’m just going to go with 295 Watt/m2. Since the size of the solar panel appears to be approximately the size of the cube part of the robot, I will estimate its radius (it looks circular) at 7 cm. With this size, irradiance, length of a day, and an efficiency of 25 percent, that would give a total energy of about 40,000 Joules. That’s very close to the energy stored in the battery of the iPhone X—note, there are some tricks going from units of mAh to Joules.

Now for the second method. How much power would it take for the Mars helicopter to fly for three minutes? How do you calculate flying power? Well, think of it this way. Power is the rate at which you use energy. What is the helicopter doing with its energy? It is taking air above it and increasing its speed (an increase in kinetic energy). I’m skipping some steps, but from that I can get an expression for the power needed to hover—you can find all the details in my calculation of the power needed for a human propelled helicopter (yes, that’s a real thing).

To calculate the flying power, I need to know the rotor size (14 cm diameter) and the helicopter mass (about 1 kg). From this, I can calculate the thrust air speed needed to hover. And with the speed, I can calculate the rate of change of air kinetic energy—which is the power. With these values (along with the density of air and the gravitational field on Mars), I get a flying power of 374 Watts (note: here are my calculations in python).

But wait. NASA has already released the power requirement for the helicopter at 220 Watts. Personally, I consider this to be close enough for a win-win. Win for me for doing this and win for you because you read it.

If I go with the NASA power of 220 Watts I can calculate the energy required to run for three minutes since power = energy/time (don’t forget to convert the time to seconds). This gives a power usage of 3.96 x 104 Joules. Boom. Right around the energy value for the other calculation.

I probably should have left this whole thing as a homework problem—but I couldn’t help myself. I wanted to see if the numbers worked out.

GizmoCrazed - October 1, 2018 0
This is where the magic happens: The main judging hall for the Intel International Science and Engineering Fair, the focus of the new documentary...

Back To Your Childhood With Metal Slug 3 For iPhone, iPad,...