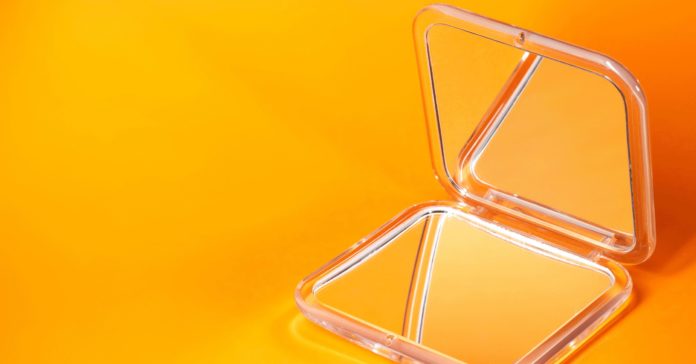 Go find a makeup mirror. There’s a good chance you have one in the bathroom. You know the type—it has surface that shows you a zoomed-in image of your face. If you have one nearby, you can use this for your physics homework to show the difference between a real and virtual image.

Here is the starting demo. Move your head so that you can see at least one eye in the mirror. If you are at a normal viewing position, you will probably see your eyes appearing a little bit bigger than they are in real life (this is a virtual image). Now slowly move away from the mirror but try to keep your eye in view. At some point, the image will become completely blurry—but then it will be in focus again but upside down (this is a real image).

Just in case you don’t have a makeup mirror, this is what you should see.

OK, that’s cool. But what is the difference between a real and virtual image? Let me start with the most basic virtual image that you have seen—and image in a plain (and flat) mirror. Imagine an object in front of this mirror. I can represent the way the light interacts with both the mirror and a human eye with a light-ray diagram. This diagram shows the path light takes as it reflects off the object.

Let me go over all the details in this diagram. I will start with the green arrow—which represents some random object. Of course the first part is that there must be a light source somewhere. This light hits the object and then reflects off in all directions. I have drawn two arrows to represent just some of the reflected light (light rays). Both of these light rays travel towards the mirror and reflect off of it. They reflect in such a way that the angle of reflection is equal to the angle of incidence.

Notice that after the two rays reflect off the mirror, they never cross. You can draw as many light rays as you like, but they aren’t going to cross after reflecting from the mirror. However—our human eyes are sort of dumb. They can’t really tell where the light actually came from. Instead, our eyes (and our brain) just trace the light back to where it appears to be from. This is where the two dashed lines come in. These are projections of the light rays to back behind the mirror where it appears both rays could come from.

According to our dumb eyes, this looks exactly like there is an identical green arrow object on the other side of the mirror—but of course, it’s just an image. Since the light rays don’t really meet there, it’s not really there. It’s just a virtual image. Notice also that the virtual image is upright, just like the object. This will be true for all virtual images—they are in the same orientation as the object. But what about mirrors reversing left and right? That’s another question, but here is the answer.

But what about that real image? To create a real image, we need something other than a plain flat mirror. This is where that makeup mirror becomes useful. The magnifying side of the makeup mirror isn’t flat—it’s actually parabolic. When parallel light rays hit a parabolic mirror, they all reflect to the same point—the focal point.

The location of this focal point depends on the curvature of the mirror—but that’s not really important now. So what happens if you put your face near a makeup mirror? Here is a light ray diagram in which your face is represented by a green arrow. Sorry if you don’t like that, but that’s what I’m going to draw.

OK, I should add a tips for drawing light rays with parabolic mirrors. Here you go.

So here you see that the reflected light rays don’t actually cross. Instead we get a virtual image. This virtual image is upright and larger than the object. This is exactly what you want a makeup mirror to do—magnify and not be upside down. Upside down images would be awkward.

Now let’s move the face (green arrow) back so that it is farther away from the mirror than the focal point. Here’s what happens to the light ray diagram.

That’s a real image. The light rays actually cross at the point of the image. Your eye doesn’t have to trick you into thinking the rays came from somewhere else—they essentially come from that point where the image is located. You will also notice that the image is inverted. It just so happens that it’s smaller than the object, but that could easily be larger too if the object moved locations.

Here’s where you might say something like this: “oh, that’s cool—but I guess I just don’t see how this is a big deal.” Good point. Let me show you why it’s cool. If you hold out an object in front of a flat mirror, it seems like the image is behind the mirror so that you can’t “grab” it. This real image is in front of the mirror. It’s almost as if you could reach out and touch it.

OK, try this. Go back to your makeup mirror (if you don’t have one, hopefully you ran out the store to buy one by now). Look at your eye in the mirror and then move back until you appear upside down. If you reach out with your hand, you should see an upside down image of your hand. Move around a bit and you should be able to almost shake your own hand. Really, you need to try this—it’s awesome.

Just in case, here is what that hand image looks like. Oh, I should point out that the “mirror” in this case is actually a Fresnel mirror from an overhead projector. A Fresnel lens is a method to get the same effect of a lens but with a flat optical piece.

If that’s not cool enough, here is another trick. Since the light rays from the mirror actually meet at some point, I can put a screen at that location and you will be able to see an image on the screen. Here is a version with a different mirror and a little clay person that I made.

Notice that the object must be illuminated so that there is enough light reflected off it to make a visible image. Of course that makes it difficult to get a picture of both the object and the image, but I think it’s good enough to see. You should also be able to tell that the image is inverted—just like the real images in the other examples. But that is indeed a real image.

Finally, I should add that you can also make a real image with a converging lens (one that’s thicker in the middle that on the sides)—but I like the mirror version a little better.

NASA Flights to Track Greenhouse Gases Across Eastern US

GizmoCrazed - July 6, 2016 0
This month, NASA begins an airborne experiment to improve scientists’ understanding of the sources of two powerful greenhouse gases and how they cycle into...