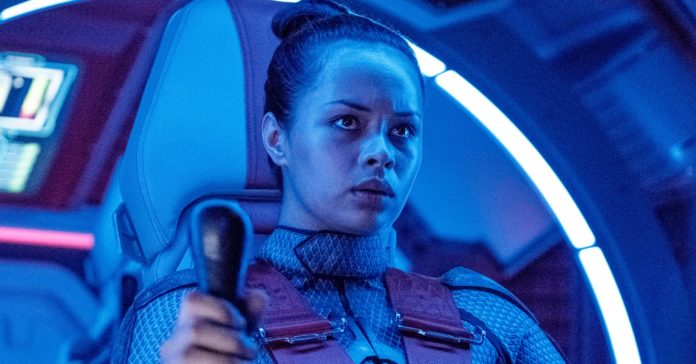 If you like science fiction, I can recommend a show for you—The Expanse. It takes place in the not-so-distant future all right here in our own solar system. There are no pew-pew lasers or faster-than-light space travel. When humans are on a spacecraft, they either “float” around or use magnetic boots (except when the spacecraft is accelerating). There are no “inertial dampeners” in The Expanse. Not only that, but it has interesting characters and a compelling plot. I like it.

As it turns out, The Expanse has three seasons all on the SyFy Network—but they did not renew for season 4. My plan was to write a physics piece about The Expanse to encourage another studio to pick it up. It seems my plan might have already worked—as Amazon Studios might be taking over. Hopefully.

OK, now for some physics. Let’s look at this flash back scene that shows the invention of the Epstein drive. The basic idea is that the space craft use some type of nuclear fusion rockets and this dude figured out a way to make them more “efficient”—I guess that means more thrust with less fuel. But why can’t the pilot move his hand during this acceleration?

Let me start with a seemingly completely unrelated experiment. Here are two cars on a low friction track. They are just sitting there. The track is level and they are not moving and not accelerating. Boring, but important.

I should point out that there are magnetic bumpers on these two cars. These magnets can push the cars apart when they get close—but right now they are far enough apart that there is no force. You can think of this magnetic bumper like a spring. In fact, I would have used a spring but I didn’t find a suitable one.

These two cars represent parts of a human’s body. There is no “compression” between these two body parts so the human would feel “weightless.” This human is in deep outer space far away from any large gravitational objects so that the human is indeed actually weightless.

What about a human standing on Earth? Here are the same two cars with the track inclined a bit. There is a large block that prevents the red car from moving (this would be like the floor on Earth).

There is really only one difference in this case in that the two cars are closer together. The “magnetic spring” has to be compressed some (which you can see with my paper-scale) in order for the red car to push “up” on the blue car. The human in this case would not feel weightless. The human would feel normal.

Hopefully it’s clear that I am trying to make a human feeling model. The distance between these two cars is a measure of how a human “feels”—at least in terms of weight.

Are you ready for the next case? What if I put these two cars on a level track and then push one of the cars with my finger so that it accelerates? Here’s what that looks like.

This is what happens when you have human in a car (an actual car) that is speeding up. The seat pushes forward on the human and then the internal parts of the human push on each other. I’m sure you’ve been in an accelerating car before, right? You know what it feels like. It feels sort of like the car is leaning back. This acceleration feels exactly like gravity because both compress that spring between your body parts. And there you have Einstein’s Equivalence Principle: an accelerating reference frame is equivalent to a gravitational field.

Of course you have to lift more than your hand to turn off an accelerating spacecraft (especially when you disable the voice commands). The whole arm might have a normal weight of 35 Newtons (8 pounds) such that it would feel like 284 Newtons (64 pounds). While some people might be able to lift a 64 pound dumbbell, a man that was living on Mars probably couldn’t. The gravitational field on the surface of Mars is only 3.8 N/kg—you don’t have to be quite as strong to move around on Mars as you do on Earth.

But wait! I have one more case to point out how humans feel weight. Let’s go back to the two cars on the track. What would happen if I let them accelerate by rolling down an incline? Here’s what that would look like.

Here both cars are accelerating close to the same value as when I pushed one of them. However, the magnetic spring is not compressed. This situation represents a human in a gravitational field without a floor—such as a person in free fall or an astronaut in orbit. In both cases there is a gravitational force on the human but this gravitational force causes the human to accelerate. There is a big difference between acceleration due to gravity and an acceleration due to some other force. For the two cars, the gravitational force pulls on both cars to cause them to accelerate. There is no need for a compressed magnetic spring to make the other car (remember these cars represent body parts) to accelerate. Since there is no spring compression, you (the human) would feel weightless. And yes, this is why astronauts feel weightless in orbit even though there is indeed gravity in space.