*The Expanse*’s Epstein Drive Has Some Awesome Physics Baked In 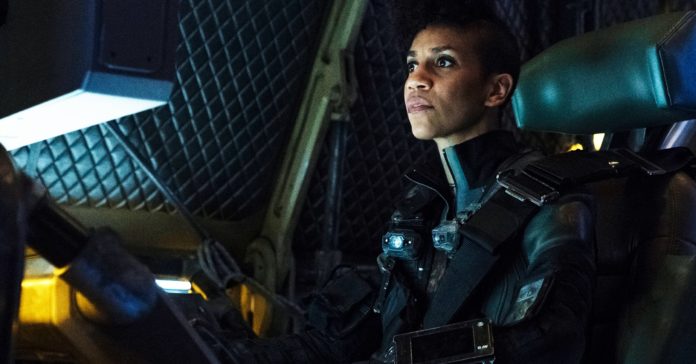 Maybe you thought my previous post on the crushing g-force of the Epstein drive from The Expanse would be the end of that. Wrong. This is such great clip, I have to do more.

In case you missed it, let me tell you what’s going on. This guy has a spaceship near Mars (maybe in orbit) and he is playing around with some modifications to his fusion drive, giving the spaceship super thrust while using very little fuel. The clip doesn’t end well for the guy, but it’s the start of a new drive—the Epstein drive. This more powerful spaceship propulsion allows ships to travel around the solar system and gives us the whole plot of The Expanse.

So, what kind of questions can be answered from this clip? Note that I am just going by evidence from the video. I’m not going to use stuff from the book (The Expanse by James S.A. Corey) the show is based on. Here are some things to consider:

Let’s just jump right into this. The scene includes a shot of the spaceship control panel. This display shows the time, speed, acceleration, and percent fuel remaining. The acceleration is measured in “g’s” where 1 g = 9.8 m/s2. For the speed, it’s measured in “MPS” which I am going to assume means meters per second (but I can check this).

During that first intial thrust, I can get speed and acceleration as a function of time (by looking at each frame). Here is a plot of speed vs. time (and here is the data in plot.ly).

OK, so we have a problem (yes, I know this is a science fiction show and not meant to be analyzed). Is the acceleration displayed incorrectly? Is the speed incorrect? Maybe the units for speed aren’t meters per second? In order to proceed, I want to keep the acceleration at 3.15 g’s—that means I’m going to have to fix the speed. The simplest way is to call the “M” in MPS something other than meters. Let me start by finding the conversion between meters and M (whatever that stands for). I can set the two accelerations equal to each other and solve for M.

I will call M the Martian-meter. It’s shorter than an Earth-meter. Oh wait! What if the acceleration is not 3.15 Earth-g’s but 3.15 Martian g’s? The gravitational field on the surface of Mars is 3.71 N/kg (3.71 m/s2) which would mean that 3.15 g’s would be an acceleration of 11.7 m/s2. That’s not good. That makes the acceleration in the clip in greater disagreement with the change in velocity. OK, I’m going with the Martian-meter idea (and I’m sticking to that).

The next time the scene shows the control panel is at a “run time” of 2 minutes and 12 seconds. The acceleration is listed at 4.28 g’s. If I record the rate the speed changes again, it’s very linear with an acceleration of 617.07 M/s2 (notice that I am using Martian-meters) or 228.3 m/s2 (Earth-meters). Converting the acceleration on the panel, I get 4.28 g’s equal to 41.94 m/s2. OK, here is a news flash. I don’t think the numbers really mean anything except that they are increasing at a linear rate.

Now for a comment. As someone who consults shows regarding science content, I suspect I know how this happened. Some science person calculated the speed so that it agrees with the 4.28 g acceleration. Next the special effects people made a program that displays the calculated speed on the readout in the scene. Finally, a producer or director looked at the rough cut and said “Hey, that doesn’t look very fast. Can we make the speed change even more?” Boom, the display is different. And really, I’m OK with this—they are trying to tell a story and emphasize the huge acceleration. Who would really check that stuff anyway? Oh, that’s right—me.

But wait! It gets even worse. If you measure the acceleration based on the changing speed, it gets high—very high. At the end of the clip, the spacecraft is traveling around 25 million meters per second and has an acceleration of about 46,119 m/s2. That’s the equivalent of 4,700 g’s. Boom.

Of course, it’s all for a visual effect. If you want to show the spacecraft at crazy high speeds, a normal acceleration wouldn’t look very impressive with just the last few digits changing. It would give the sense that it’s not really accelerating (even though it is).

This is what you want. You want to know how fast this ship ends up going after it runs out of fuel. OK, I’ve got you covered. However, I don’t know everything so I’m going to have to guess at some stuff. Here are my estimations.

Let’s get started. The first thing to determine is the total burn time. If it uses up 0.8 percent in four hours, it would take about 450 hours to run out of fuel (that’s almost 19 days). Next I can use the acceleration and time to find the final velocity (based on the definition of acceleration).

Using my values (need to put in the time in seconds), I get a velocity that’s about half the speed of light (3 x 108 m/s)—so, this method won’t work. Instead, I would need to use the relativistic definition of momentum:

Right—you don’t want to do that since the math gets a bit tricker (you also need to use the momentum principle). Let’s just say the final speed is super fast. Super, super fast. I will leave the actual calculation as a homework question.

Let me add one more thing for you to consider. How would you measure the speed in a spacecraft anyway? If you are thinking about the speed measurement for a car or airplane, it seems pretty straightforward. A car just measures the rotation rate of the tires and then uses that to calculate the speed. An airplane can measure the change in pressure due to the air moving past the wing to get the speed. But what about in space? There is nothing moving past the spacecraft to use for a speed measurement. Instead, you would have to calculate the speed based on the acceleration. Yes, that’s what you would do.