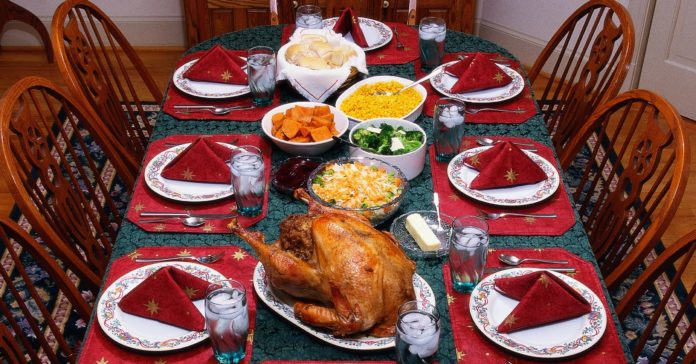 If you didn’t know it before the Cambridge Analytica debacle, you do now: Your digital habits are dual-use data. One company might analyze them to recommend you TV shows, while another might try to leverage them to influence an election. The first scenario you might be OK with, the other not so much.

So, knowing what you know now, ask yourself how you feel about this: Your personal data, it seems, can also be used to infer how your politics affect your personal life, including things like the time you spend with your family during the holidays.

For a study published in this week’s issue of Science, UCLA economist Keith Chen and Washington State University economist Ryne Rohla combined smartphone-location data from more than 10 million Americans with precinct-level election results to quantify the impact of partisanship and political advertising on Thanksgiving dinners in 2016, on the heels of the presidential election. Among their findings: Democrats shortened their visits to Republican households by between 20 and 40 minutes; Republicans cut their time with Democratic hosts by 50 to 70 min; and mismatched families from areas with high political ad exposure spent even less time together.

The researchers’ results might not surprise you (2016’s election reportedly led many people to cut their Thanksgivings plans short), but their methods might: The smartphone data came from SafeGraph, a company that uses geolocation data from apps on your phone to maintain anonymized geospatial datasets for more than 10 million US smartphones. These data consist of “pings,” which give the locations of individual smartphones at specific moments in time. For their study, the researchers analyzed some 21 billion pings from November 2016 and 4.5 billion from November 2015.

You might be thinking: OK, that’s one kind of data, but it’s creepy to think that researchers could match my phone’s location with my political affiliation. Who the hell has that data? That’s where the election results come in. Chen and Rohla collected precinct-level polling data—the highest-resolution available—through internet scraping and by contacting secretaries of state, boards of election, and county clerks. Merging the two datasets was as simple as inferring the precinct and census block of each smartphone user’s home based on the location of pings logged between 1:00 am and 4:00 am in the weeks before Thanksgiving. People who live in the same precinct tend to vote for the same candidate. “So it turns out where your smartphone spends its time between 1:00 and 4:00 in the morning correlates pretty closely with who you voted for in the 2016 election,” says Chen. He and Rohla used the same method to determine where people traveled on Thanksgiving day.

With their merged data sets, the researchers were able to control for geographic and demographic factors. By comparing similar families to each other, Chen and Rohla showed that dinners attended by residents from opposing-party precincts in 2016 were 30 to 50 minutes shorter than same-party get-togethers. They were also able to compare behavior between years: In 2015, mismatched families still tended to spend less time together than matched ones, but the effect was more pronounced in 2016. And that was especially true when travelers and hosts hailed from media markets with lots of political television ads.

In short: It’s astonishing what you can infer about personal relationships from just a few datasets.

“What this study suggests is it may be possible to use new kinds of data to measure polarization,” says Brown University economist Jesse Shapiro, who was unaffiliated with the study. An expert in the data-driven analysis of partisanship, Shapiro says the field relies mostly on survey data and self-reports, which can be flawed. But Chen and Rohla’s approach could offer researchers a less-biased glimpse into people’s lives; it’s safe to assume the anonymous cell phone users whose geolocation data was used in this study did not intend to communicate their political leanings or family drama to a researcher. In going about their daily, personal business, Shapiro says, they were nevertheless communicating something about these private aspects of their lives.

That’s a thrilling possibility for social science researchers, who have grown increasingly interested in dissecting the link between things like social media use and society’s political divisions. Even tech companies are beginning to acknowledge the value of such research: Facebook recently pledged to provide select scientists unprecedented access to its troves of user data, to study the platform’s impact on democracy and elections. As Shapiro puts it: “It’s exciting to see new data employed creatively to measure polarization and political divisions in different ways, using data that until recently wasn’t accessible to researchers.”

Pictures Of Lunar Eclipse From Around The World

How to Turn Wetsuits Into 'Artificial Blubber'

This iPhone Amazingly Still Works After Falling From a Plane