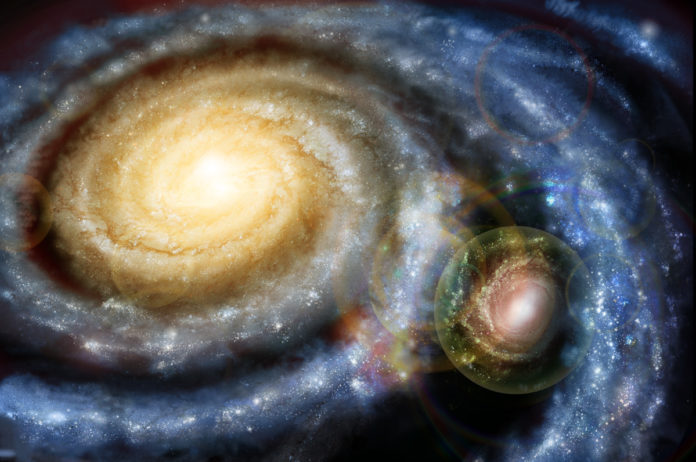 “It’s impossible to understand how that object exists,” says Bothun. “All our models do not produce objects anywhere near Malin 1.” The dim giant proved there might be more to the universe’s galaxies than anyone suspected.

Galvanized by the discovery of Malin 1, astronomers pored over the previous decades’ photographic plates for hints of unnoticed, low-surface-brightness galaxies. (In fact, they still do — there are a lot of plates.) Although less grand than Malin 1, thousands more materialized throughout the 1990s.

Further aiding in the search were charge-coupled devices (CCDs), a far more light-sensitive imaging technology that took off in the 1980s and dominates astronomy today. “Discovering low-surface-brightness galaxies was a thrilling thing to do,” says Karen O’Neil, then a student of Bothun’s and now the director of Green Bank Observatory in West Virginia. “It’s always fun to go out and look for the unknown.”

Though intriguing, next to the billions of known luminous galaxies, these hundreds of dim ones still didn’t amount to a hill of beans, cosmically speaking. The phantom universe, so far, was just a phantom niche.

But ironically, it was work by Disney himself that ended up slamming the door shut on the field. He helped install a powerful receiver at the Parkes Observatory radio dish in Australia in 1997, hoping to wrangle many Malin 1-esque galaxies and finally blow the lid off the dim universe. In data collected over several years, more than 4,000 concentrations of hydrogen gas turned up — promising candidates as low-surface-brightness galaxies.

By 2005, however, optical telescope follow-ups on these sources suggested they were almost all just hydrogen clouds in normal galaxies. “Not one looked to be a hidden galaxy,” says Disney. The discovery was a crushing result, seeming to prove beyond doubt that Malin 1 and its ilk were just bizarre freaks, not part of a larger phantom universe.

“That killed the subject off,” says Disney. “Even I gave up.”

But the subject did not give up on him, for other skygazers thought Disney was on to something.

“I was a bit of a figure crying in the darkness,” says Disney, “literally.”

At a 2009 conference in the Caucasus region, Disney met Ukrainian astronomer Valentina Karachentseva, who suggested some of those thousands of hydrogen clouds in the Parkes survey were indeed galaxies. Over her career, through keen eyesight alone, Karachentseva has identified numerous dim galaxies on photographic plates. She told Disney she’d spotted standalone galaxy-like objects right where the Parkes survey had found gas clouds identified as merely extended parts of nearby bright galaxies.

Thunderstruck, Disney returned to Wales and tried something new. He went over calculations affirming just how clustered the universe’s galaxies are. They’re fundamentally social creatures, piling up practically on top of each other, leaving immense, desolate voids between clusters. Could his unseen galaxies be hidden among these huddled galactic herds, with their separate gas clouds mistaken as belonging to the closest, resplendent galactic neighbor?

Disney came to realize that the Parkes observations lacked the resolution, the fineness of detail, to make out dim galaxies tightly bunched with luminous galaxies. He tried to convince study colleagues and an astronomical journal of the possible error, but none was receptive. “I was a bit of a figure crying in the darkness,” says Disney, “literally.”

He eventually found a way to settle the matter. In early 2015 Disney was awarded time on the upgraded, exquisitely sensitive Karl G. Jansky Very Large Array (VLA) of radio dishes in New Mexico. He rescanned a sample of 19 hydrogen clouds from the 4,000 candidates in the Parkes survey. Fourteen of the clouds, it turned out, had no visible counterpart galaxy in the new data.

“Bingo,” says Disney. Straightaway, it was clear that the gas cloud radio wave sources shouldn’t have been lumped together with nearby, optically bright galaxies. He was onto something.

Disney didn’t know what these clandestine objects might be like, and he immediately wanted to follow up with new observations, which are now taking place. In late 2016, using the William Herschel Telescope in the Canary Islands, he spied hints of a dozen newfound, unmistakable dim galaxies.

These objects will increasingly have ample new company, it seems. In a 2015 study, Pieter van Dokkum of Yale University and colleagues announced they had unearthed 47 never-before-seen, Milky Way-sized yet extremely diffuse (spread out, so relatively dim) galaxies in the Coma Cluster of galaxies, among the most studied in astronomy. “This was a complete surprise,” says van Dokkum.

It was not some mammoth new telescope that sussed out these faint objects. The ever-larger telescopes the astronomical community usually clamors for are actually bad at revealing low-surface-brightness objects. These telescopes typically use mirrors, which capture more random, unwanted light, burying any faintly emitting objects. Instead, van Dokkum found his galaxies by grouping eight 400-millimeter lenses into a contraption resembling an insect’s compound eye. Indeed, the project’s name, Dragonfly, comes from van Dokkum’s hobby of taking pictures of the insect.

GizmoCrazed - November 8, 2012 0
The space is definitely a strange environment, no matter how many clear facts the humankind has. At the same time, there are hundreds of...