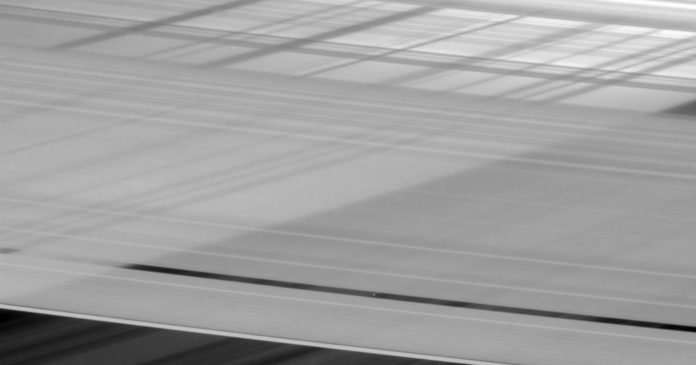 This week we are bounding around the universe, hovering above Earth in the International Space Station and then peeping at far-off black holes and space-warping galaxy clusters. We’ll also take a closer look at Saturn’s rings. A mere 800 million miles away, Saturn boasts the most iconic planetary feature in our solar system—a wide belt of shiny rings. These rings are thought to be made up of comets and moons that have been ripped apart and destroyed and pulled inward by Saturn’s gravity. Some of those particles are as small as grains of sand; some are as large as mountains. And they’re what makes Saturn, Saturn.

Although Saturn is famous for its possibly habitable moons, Enceladus and Titan, it also has many tiny moons that orbit close to the rings. They even reside inside the rings, creating gaps that are like custom grooves on a planetary record. Two of the most well known mini-moons are Pan and Daphnis. Pan is called many things, including “ravioli moon,” because well, it looks like a giant space ravioli. And Daphnis not only has made its own channel, but also has created waves out of the icy particles nearby. That’s because, while small, Daphnis still exerts enough gravitational force to influence Saturn’s mighty rings.

Not ready to return to the third stone from the Sun? Check out Wired’s full collection of space photos here.