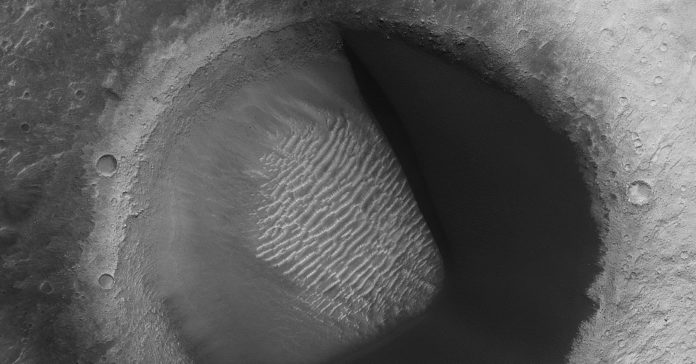 We are bopping around the entire universe this week, but our first stop is local—let’s head to Mars. When you think of Mars, you might imagine red-tinted deserts and craggy red rocks. But you should also think of Pac Man. This week NASA released an image of a crater-dune combination it is calling Bachan Pac-Man. NASA calls them, a “dune in a crater” because they form within impact craters and their crescent shape makes them appear as though they are eating the material being blown about. Mars isn’t the only interesting planet on this week’s space flyby though.

Just a couple of planets and hundreds of millions of miles away is Saturn—the iconic ringed beauty of the solar system. While the Cassini spacecraft is no longer orbiting the planet, the orbiter took almost 500,000 photos during its 13 years at Saturn, so there are still many images to enjoy, including ones with surprises, like moons! Saturn and Jupiter both have dozens of moons—Jupiter has 69 while Saturn has 62. They range in sizes from a few kilometers wide to worlds like Titan, which is larger than our own moon. Enjoy your trip—and don’t forget your space helmet.

Want to linger around the planets a little longer? Check out the full collection of space photos here.

The Cold War Project That Pulled Climate Science From the Ice