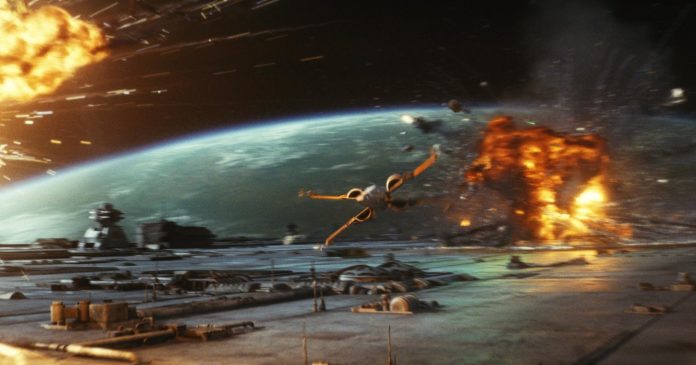 I have a problem: I can’t stop analyzing Star Wars movies. On top of that, there is another issue. I’ve stated that the physics of a movie doesn’t have to be absolutely correct—and I still believe that. And now, I am going to complain about some physics in Star Wars: The Last Jedi even though I said you shouldn’t.

But first, let me give you a couple of examples of bad physics that doesn’t bother me. Consider an x-wing fighter flying near the Death Star. When the x-wing makes a turning maneuver, the space craft banks. Yes, this looks cool because it makes humans think about dogfights with airplanes during WWII. But in space, there is no air—you don’t need to tilt the vehicle to change the direction of lift for a turn. Instead, you need to change the direction of the thrusters. Or what about the whole idea of thrusters? In space, there is no air to push against a vehicle. This means to travel at a constant speed, you wouldn’t need to waste fuel burning the thrusters. Just turn off the engines and you would move along steadily.

I’m OK with these errors. Really, I am. The problem I have is when the rules of “physics” change. This is exactly what happens in The Last Jedi. Spoilers below. You have been warned.

Now for the scene in question. The Resistance are in a large cruiser trying to escape from the First Order. They can’t jump to hyperspace (well, they could but they won’t). General Hux (of the First Order) states that the Resistance is faster, but they they can’t escape. The plan is to just keep firing from the Supremacy (a mega-class star destroyer) on the cruiser until something happens. I don’t know what they’re shooting from the Supremacy, but Wookieepedia lists the starship as having turbolasers.

But the stuff coming out of the turbolasers probably aren’t actually lasers. Why not? There are two main reasons. First, you can see them from the side. You can’t really see lasers from the side unless they scatter off something like dust. Second, they are traveling too slowly. A laser travels at the speed of light—3 x 108 m/s. This means that a laser traveling from the Supremacy to the Raddus (the Resistance ship) would only take a tiny fraction of a second. So, they’ve got to be something else. I even measured the speed of these “blaster bolts” and found an average speed of around 10,000 m/s.

OK, that’s all fine. But here is the problem with The Last Jedi. If you go to the end of the space chase you will see that the turbolaser bolts actually travel in an arc and not in a straight line. As far as I can tell, all of the previous movies showed straight traveling blaster bolts. That makes these bolts inconsistent with the old ones.

Why would a movie director choose to give the bolts an arc? I can think of two logical reasons. First, arcing bolts have some maximum range. Without a maximum range, the Supremacy could just continue to fire on the Raddus. It would remove a plot element from the movie. Second, these bolts would have a trajectory that is similar to that of a WWII artillery shell. That would make this fleeing starship look like a naval battle on Earth. That’s what it’s supposed to seem like anyway.

Now for the next step—making a model. You don’t really understand something until you can model it. So, I will now make a model showing the trajectory of one of these blaster bolts. If I can get it to look similar to the clip from the movie, then that’s mostly a win (for me).

I need to start off with some values. If I want to show both starships, I need to know their dimensions. Good news! Wookieepedia has the size of both the Raddus and the Supremacy—note: they are both pretty huge. There is one other dimension that I don’t know. I don’t know the distance between these two ships, so I’m just going to guess that it is 50 times the length of the Raddus (you can change this later if you like).

For the motion of the blaster bolt, I can get the time of flight using video analysis—essentially by just counting the number of frames it takes for a bolt to travel from the Supremacy to the Raddus. Based on the one shot I looked at, the travel time is around 1.58 seconds.

I need to make some more starting statements. I will assume the turbolaser bolt will be just like projectile motion. In physics, we consider an object to be projectile motion if there is only a vertical (downward) force acting on it. This means that the horizontal velocity is constant and the vertical motion has a constant acceleration. If you take a tennis ball and toss it just across a table, this would approximately be projectile motion since the air resistance force would be insignificant.

For the vertical motion, I am going to start with a launch angle of 10°—just because that gives something that looks close to the scene. From this angle I can get the starting vertical velocity. Since I know the total time of flight (from the horizontal motion), I can calculate the value of the vertical acceleration needed to get the turbolaser bolt down to the level of the Raddus. Oh, I guess you want to know the value of this acceleration—it’s 2.4 x 104 m/s2 (compare this to 9.8 m/s2 on the surface of the Earth).

That’s it. I have everything I need to make a model. Here it is. I’ve drawn the Supremacy as a box and the Raddus is a cylinder. Feel free to take a look at the code and change some stuff.

I’m pretty happy with this—but now for some more questions.

Yes, there are homework questions. Here they are.

Researchers have developed an artificial pancreas that will be available by...