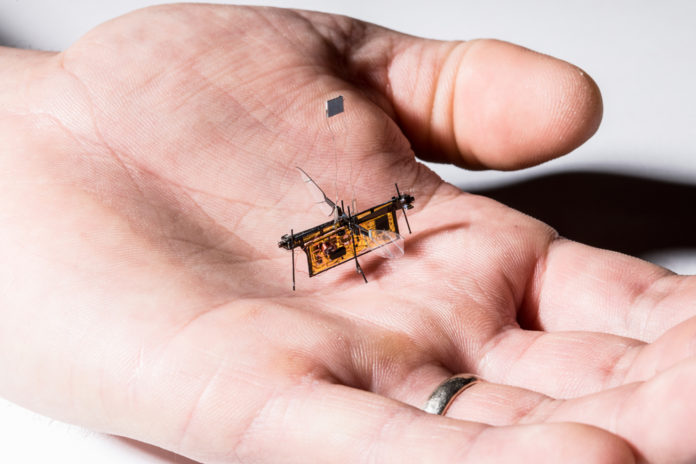 Thanks to lasers, this little robot finally lost its umbilical cord. (Credit: Mark Stone/University of Washington)

We’ve seen robot insects fly, land and even swim. But they weren’t doing that all by themselves. Until now, a tether of wires held them back.

A group of researchers from the University of Washington made the first wirelessly powered robotic insect. The bot, called RoboFly, weighs just 190 mg — it’s barely heavier than a toothpick and just slightly larger than a real fly.

The idea for these bioinspired robots was first proposed in 1989 by Rodney Brooks and Anita Flynn of MIT. Work on actually making them began in the early 2000s with the Berkeley Micro Robotic Fly project. Since then the robots have progressed, but not enough to cut their umbilical cord. Their small size proved to be a major challenge, as wireless flight requires on-board components and processing.

To make RoboFly airborne, the Washington researchers ditched the wires for lasers. By pointing a laser beam at the solar cell attached to the top of the bot, the researcher supply energy in the form of light that the cell converts the light into usable power. That laser didn’t supply quite enough energy to get RoboFly in the air, though, so they had to create a circuit to increase the voltage output.

Once RoboFly was finally untethered and flying, the team wanted to let it control its wings. To do that, they added a microcontroller to the circuit. It was finally free.

“The microcontroller acts like a real fly’s brain telling wing muscles when to fire,” said co-author Vikram Iyer, a doctoral student in the UW Department of Electrical Engineering in a news release. “On RoboFly, it tells the wings things like ‘flap hard now’ or ‘don’t flap.’”

Microbots like the RoboFly could be useful for search-and-rescue missions, environmental monitoring and agriculture support. One researcher thinks they could even be good at sniffing out methane leaks.