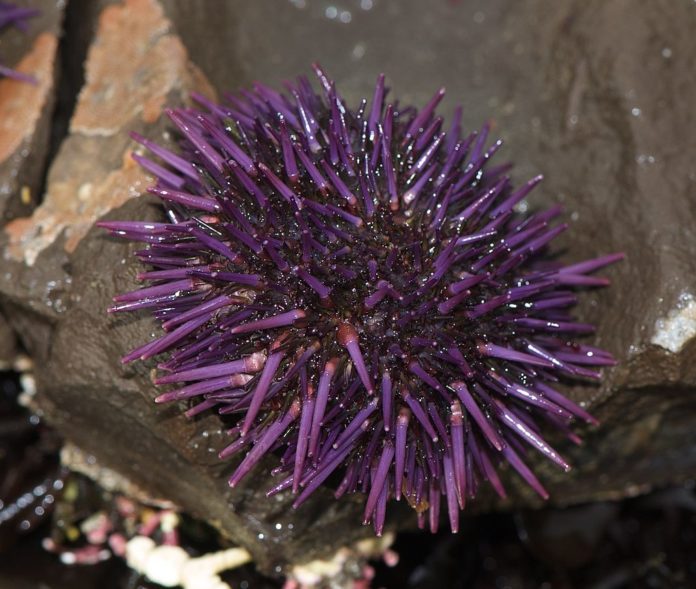 Threaten a sea urchin, and you may see it point its spines at you. This defensive response is pretty unremarkable—except for the fact that, if you look closer, you will not see the sea urchin’s eyes. It doesn’t have any.

Sea urchins are the only animals that have vision despite “conspicuously lacking eyes,” write Dan-Eric Nilsson, a biologist at the University of Lund in Sweden who studies animal vision, and his colleagues. In a new study, the researchers gave the spiny sea creatures a kind of eyeless eye exam to find out how good their vision is. They concluded that the animals have pretty poor eyesight, and that it’s actually foot-sight.

“I think the term ‘tube feet’ may be a little misleading,” Nilsson says. Sea urchins are shaped like squashed spheres, with a hard shell covered in spines. Interspersed among the spines are holes that hide tentacle-like objects called tube feet. But only the feet on the urchin’s underside are for walking. The urchin uses the rest of its tube feet for tasks like attaching to surfaces, flipping itself upright when it gets turned over, and keeping clean, Nilsson says.

A 2011 study of purple sea urchins (Strongylocentrotus purpuratus) found that the animals’ tube feet, strangely, have light-sensitive cells at their bases. Perhaps, the authors wrote, “The entire sea urchin…functions as a huge compound eye.”

In the new study, researchers followed up on this idea by studying long-spined sea urchins (Diadema africanum). They placed the urchins one at a time in the center of a cylindrical tank. Against the wall of this “arena,” the researchers displayed printed images—either a simple black bar, or a pattern of black, white and gray. They used images of different widths like the rows in an eye chart, to test how well the animals could see. In another set of experiments, a monitor directly above the sea urchins displayed black circles of different sizes, like looming predators.

In some cases, the sea urchins moved toward the dark images on the tank walls. This behavior could help urchins in the wild to find shelter when they’re exposed on the seafloor, or to find other urchins and cluster for safety. When an object loomed overhead, alarmed urchins sometimes pointed their spines at it.

Based on which images prompted a response, the researchers found that sea urchin vision isn’t great. Of the 360 degrees around an urchin, an object has to take up somewhere between 30 and 70 degrees before the urchin can see it. Humans can see things at more like 1/60th of a degree, Nilsson says.

“This means that the sea urchin’s picture of the world is very crude in human standards,” Nilsson says. “But it is good enough to guide movements towards suitable structures in their environment.”

The researchers also examined the bodies of long-spined sea urchins up close to see where their tube feet are. Then they estimated the angles at which light hits the feet. They calculated what resolution the animal’s vision would have if all its feet—hundreds in every direction, Nilsson says—worked together as a kind of giant compound eye.

The visual acuity that urchins showed in the tank experiments was within the range that scientists estimated from the tube-foot model. In other words, the animals do seem to see with their feet. A sea urchin is one big, spine-covered eyeball. Its vision might not impress an eye doctor, but for an animal with no actual eyes, it’s not bad.

GizmoCrazed - April 15, 2019 0
Why do people do such dumb things? In today's dumb thing, these kids decide to use the wheel of a gasoline-powered scooter to spin...

This Awesome Facebook Smartphone Concept Will Compel You To Buy It...

Jailbreaking For All Devices Should Be Made Legal, Says EFF