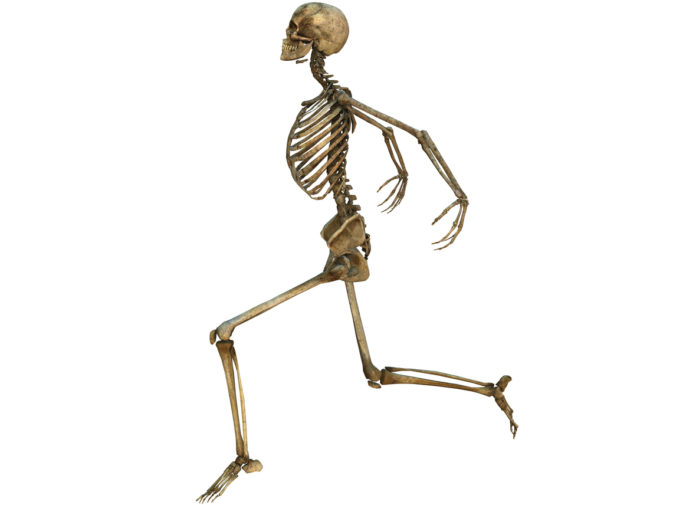 Superman was the Man of Steel. We can’t possibly be like him.

But guess what? Ounce for ounce, our bones are stronger than steel.

So why are people always breaking them? It’s because bones are also light and flexible, and the physics behind the speed and angle of blows make mincemeat of strength measures. That’s why a karate expert can break brick with his hand, but might also break a finger after slipping on ice. Chest compressions performed too fast on someone in cardiac arrest can break a rib. Done slowly, no issue.

Bone’s strength and flexibility has amazed scientists for decades. A paper published today in Science gets to the marrow of why bone is so special.

Coil All The Way Down

Bone is made primarily of collagen and a crystal mineral called carbonate-substituted hydroxyapatite. About a century ago, scientists discovered that bone is structured like rope, with multiple coils interwoven together. A single thread is pretty weak. But weave a bunch together and you have rope that can pull or suspend hundreds of pounds.

Similarly, in bone, there’s a kind of helical motif that repeats no matter what level you’re looking at. This structure is repeated in bone layers from the macroscale to the nanoscale over nine to ten orders of magnitude — like a Russian nesting doll whose multiple figures each get smaller while looking mostly the same.

Now, new tech advancements are letting researchers look at the very smallest components of bone. Researchers used scanning transmission electron microscopy to peer at tiny bone crystallites. After observing from multiple angles to construct 3-D images, they discovered that the rose-shaped crystals the saw at a resolution of 5 nanometers were also in a rope configuration — the exact same thing they saw at every other level of resolution. It’s an example of what scientists call hierarchical configuration.

The structure, which has been seen at larger scales in bone before had never before been documented in such tiny structures. Researchers also observed the complex blend between crystallites and collagen at this scale.

“Bone is indeed both strong and flexible, by virtue of its hierarchical organization,” says Molly M. Stevens, professor of biomedical materials and regenerative medicine at Imperial College London, and co-author of the paper. “We should learn from nature how to recapitulate multiple nested levels of organization.”

The work could aid researchers in diverse fields involving bone, such as osteology, forensic medicine and archaeology.

Though a marvel of engineering, bone still weakens over time. But there is a simple way to combat this and keep bones flexible. “Exercise,” Stevens says.

The Stories Behind Technology’s Top Names

GizmoCrazed - October 23, 2010 3
Have you ever wondered where the names like Twitter, Yahoo, Android etc. came from? Companies have different strategies for naming or branding themselves but in...

Logitech MX Vertical review: Flipping the mouse on its side is...

How a blockchain startup with 1M users is working to break...