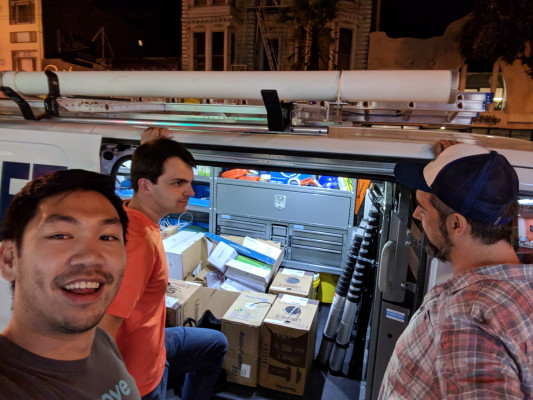 If you live in a city, you’re probably deciding between a handful of major broadband or wireless carriers — maybe something like Comcast or AT&T. But there’s a good chance that there are a bunch of local carriers that are looking to get off the ground, and Benjamin Huang wants to help make sure there are even more options/.

That’s the idea behind Necto, a startup looking to create a sort of ISP school to help people get started with their own internet service provider founded by Huang and Adam Montgomery. Typically that’s a pretty tall order, but Necto works with individuals to learn how to build a network, get the right equipment, and deploy it in order to get consumers access to a new internet service provider that’s an alternative to the larger carriers. There are already emerging providers like Sonic in San Francisco, which aims to offer quick internet for a cheaper price, but there’s a whole group of individuals waiting in the wings that are trying to build their own ISP and the associated business behind it, Huang said. Necto is launching out of Y Combinator’s winter 2018 class.

“Ultimately, we want to see so many ISPs that net neutrality isn’t an issue,” Montgomery said. “It’s cheaper than ever and easier to start an internet service provider. People didn’t know they could do this, and networking engineering is the highest cost. You have to have a lot of stuff to build out. We remove that and bundle it as an ISP starter kit service. We give guidance to the operators, these are the customers you have, this is the equipment you need buy, here’s how to construct them. It’s more like constructing Ikea furniture. The hard part we remove which is automatically configuring these routers.”

Necto started off as its own attempt at an internet service provider, but Huang and Montgomery found that trying to get wholesale fiber was a high barrier to entry. The pair started looking into wholesale wireless, and Huang said that technology is getting to the point where it’s just as fast as typical broadband and an option for resale. The challenge then is getting the equipment into the hands of individuals that want to ramp up their own ISP and showing them how to get started. Then, they’re off to the races and work to build a business around that, including customer service and other facets of it.

Necto essentially charges for the guidance of how to start an ISP, including a class that individuals go through in order to get one off the ground. Then the company continues to ship software to ensure that it’s not as difficult to keep the equipment up and running, as well as provide ongoing support for those individuals. The equipment is all off the shelf, Huang said, in order to lower the barrier to entry for these providers.

The challenge here, however, will be ensuring that not only individuals know they can get an ISP off the ground, but getting their — and consumers’ — attention in the first place. Necto hopes to take a hyper-local strategy, Montgomery said, like traveling to farmers’ markets and working with local operators to ensure they can track down the right people that are looking to build a business around ISPs. There are still going to be plenty of challenges as it continues to work with wholesale wireless providers in order to get these businesses off the ground.