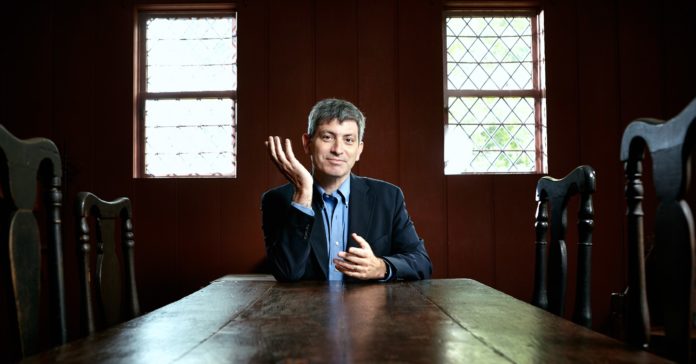 Heredity is a powerful concept. It’s the thing that ties families together—that gives shape to their shared history of stories, of homes, of personalities. And more and more, it’s the way we understand families’ shared genetic inheritance. But that more modern biological notion of heredity comes with some new, technical baggage: It’s easier to talk about the high blood pressure that runs in your family than it is to discern the alleles that define it, all the meiotic divisions that had to occur before that trait was passed down to you. And misunderstanding the role DNA does or doesn’t play in determining one’s fate can have dangerous consequences.

Luckily, acclaimed science writer Carl Zimmer is here to unravel the tangled history of the science and pseudoscience surrounding heredity, in all its many forms. In his expansive, engrossing, and often enlightening new book, She Has Her Mother’s Laugh, Zimmer takes readers on a tale through time and technology, from the inbred Holy Roman Empire to the birthplace of American eugenics to the Japanese lab where scientists are reprogramming skin cells into eggs and sperm. But Zimmer says it’s not a book about genetics. It’s a book about the question genetics was invented to answer. Namely, how did the past become the present, and how will the present shape the future?

Big questions, Zimmer. Now here are a few for you.

WIRED: You argue in this book that it’s time to redefine heredity, to get away from a DNA-centric notion of inheritance, right at a time when people are only just beginning to tap into their own genomes. What gives?

Zimmer: People have been trying to use genetics as a form of identification for a very long time. Of course they didn’t always call it that. DNA is just a modern substitute for the old idea of blood. But in many ways it hasn’t evolved much from the time we thought of ancestry as a pure substance. We still say “I’ve got some Irish blood in me,” but it’s not like you can take out just the Irish blood and fill a cup with it. It’s the same with the bits of DNA in your genome that came from people that once lived in that part of the world. We’re all an amalgam of fragments that have all traveled different paths and each only influences us in very subtle ways.

What we really want from heredity is an explanation of why we are the way we are, and genes alone can’t give us that. There are other things we inherit that matter just as much—like the chemical modifications to our DNA that turn genes on and off or the microbes that abound in our bodies or the human-made environments we’re born into. We literally pass down the whole world to our children, and right now our children are inheriting climate change.

Look, the reason there’s demand for consumer genetics right now isn’t just because the costs are crashing. It’s also because humans have all these long standing traditions about heredity. On the one hand it’s important to find a connection with our pasts. Especially for people whose families have been severed by things like slavery and genocide. Because, we have to remember that for centuries heredity has been used as a weapon to dehumanize and erase some groups of people. For those people genetic testing can be one the most profound experience of their lives. But consumer genetics can only give you really rough estimates right now. It’s going to get a lot more powerful very quickly, it’s just not there yet.

You got your full genome sequenced a few years ago and uploaded it to a public genealogical database for scientific research. Given the privacy concerns that have emerged since then, particularly around the case of the Golden State Killer, do you ever wonder what kind of consequences it might have for your family?

Well when I first got sequenced I made the decision with my family that I wasn’t going to write about it until after we looked at the results with our genetic counselor. But since there wasn’t much in there to worry about in the end I did wind up posting the genome online along with the analysis, as a teaching tool for researchers. And yes, 50 percent of that DNA is also in my kids but nobody knows which 50 percent. I mean, these are hard questions, I don’t think there’s any one correct answer. I understand people who don’t want to share their DNA at all, and ultimately I think people should have autonomy over their own data. At some point people might be able to do some unpleasant stuff with my genome, but right now it’s mostly astrology. There’s a huge leap to go from sequenced DNA to certainty about what that DNA means. And another huge leap to changing DNA to get an outcome we want. We hardly understand any of it.

Yes, and other gene-editing tools.

Crispr gets a lot of coverage (including here at WIRED). But as you chronicle in the book, it’s certainly not the first technology that promised to alter the genetic inheritance of future generations of humans. Do you think this time will be different?

No, honestly it doesn’t feel that different. Not to diminish the importance of Crispr; it’s certainly going to be a mainstay for developing medicines and crops going forward, at least until the next better tool comes along. Working on this book I talked to a guy who was able to turn a wild plant into a domestic crop in one shot, a single generation with gene editing. So we are going to start taking control of heredity in really awesome, powerful ways. That being said, we shouldn’t indulge every fantasy and nightmare we might have about fundamentally changing human nature. We just have to look at human history to see how wrongheaded and dangerous that can be.

Your next Beats Studio headphones could rock for 22 hours