Kilauea and the Implacable Power of Volcanic Lava 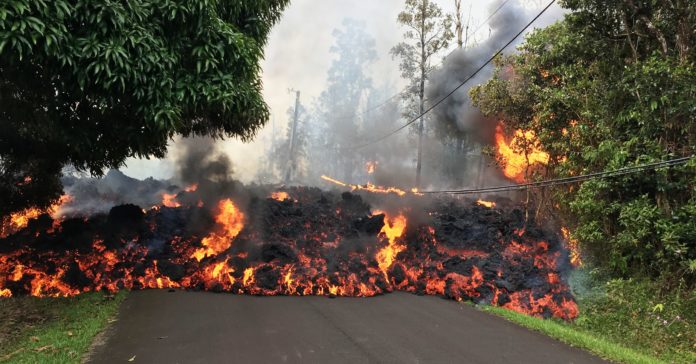 In 1935, lava from an eruption of the volcano Mauna Loa, on the Big Island of Hawai’i, started oozing toward the Wailuku River, main source of water for the city of Hilo. This danger to the more than 15,000 residents of Hilo was exactly the opportunity that Thomas Jaggar, founder of the Hawaiian Volcano Observatory, had been waiting for: to blow up a volcano.

This isn’t as crazy as it sounds. Actually, no, it was crazy. Jaggar thought, based on the state of the science, that explosives would collapse and plug the channels and underground tubes through which lava flows.

He approached the Army Air Corps, which had an airbase on the island of Oahu. There, a young lieutenant colonel named George Patton (yes, that Patton) planned a mission to deploy three Keystone B-3A bombers and two Keystone B-6As—biplanes!—to the slopes of Mauna Loa, where they’d drop 20 600-pound bombs on the lava. Five dropped onto red-hot flows, splashing lava 200 feet into the air upon detonation (which then punched holes through one of the bombers’ wings). Most of the other bombs hit the solidified sides of the flows. A US Geological Survey geologist on board one of the planes, Harold Stearns, reported that most of the bombs merely impacted on the surface.

So did it work? Well, the lava diverted and stopped flowing before it reached the river. It remains … controversial as to whether the bombs or the cessation of the eruption did it. (Jaggar thought the explosions released enough pressure to stop the lava; no one else does.)

Volcanoes have a lot of ways to kill people—caustic ash, superheated hurricane-like pyroclastic flows, incandescent mudslides called lahars…and, of course, lava. As the world watches the ongoing eruption of the volcano Kilauea, Mauna Loa’s neighbor to the east, you can see why Jaggar would resort to explosives, and why people have been trying to build lava barriers, unsuccessfully, since 1881. Lava’s appearance is rarely a surprise—but where it flows and how fast remain unpredictable. And it is, as researchers say, binary. Wherever it goes, it incinerates or buries everything in its path. There’s not much anyone can do about it except watch.

“A lot of cultures around the world have come to the conclusion that it’s a bad idea to live too close to a volcano,” says Natalia Deligne, a volcanic hazard and risk modeler at GNS Science, the New Zealand equivalent of the USGS. That’s why lots of volcanoes are magically inside national parks. “If you look at indigenous traditions, often the vent area is a taboo area,” Deligne says. “That’s just another form of land use planning.”

Unlike the ostentatious, once-in-a-blew-moon eruptors like the stratovolcanoes of the Cascades and the Andes, Hawaiian volcanoes are “shield volcanoes,” slow and steady pumps of relatively runny, low-silica lava. Volcanoes in general aren’t as murderous as other natural disasters—since 1900 volcanoes have killed about 280,000 humans, but in that same time earthquakes have killed more than 2 million. Lava comes in three types (highly viscous, deep “blocky” lava; chunky, fast-moving ‘a ‘a, and smooth pahoehoe), and it tends to move slow enough that it destroys property rather than kills people. So people continue to live on the slopes of the volcanoes. (Hawai’ian volcanoes also emit toxic, corrosive gas—sulfur dioxide turns into sulfuric acid on contact with the atmosphere, creating potentially deadly clouds called vog, short for “volcanic smog” [itself a contraction of “smoke” and “fog”].)

That’s what’s happening at Kilauea; lava is emerging from 14 fissures in the volcano’s East Rift Zone, amid a housing subdivision called Leilani Estates. More than 1,700 people had to evacuate, and about a dozen homes were consumed. This has been the situation, on and off, since the 1980s. “The lava would flow for a certain distance, then stop, and then rather than resuming travel in the same direction it would go back toward the vent and break out somewhere else,” says Michael Lindell, an emeritus environmental psychologist at Texas A&M who studies attitudes toward volcano risk. “Volcanologists don’t thoroughly understand the underground plumbing. They’ve got a pretty good idea, but they keep getting surprised.”

Even today, lava is unpredictable. Nobody really understands tube and channel formation or how a’a’ lava becomes pahoehoe and vice versa. Computers can forecast paths of flow from topography, but not speed or how wide the flow will be. (The USGS map of lava hazard zones on Hawai’i hasn’t been updated since 1992.) “How fast it’s coming out of the vents, how hot it is, how fast it’s cooling, how many crystals you have in the lava—those are all parameters that will dictate how the lava will flow,” Deligne says.

There’s not much to do about it when it does. Deligne says that hardly anyone actually zones construction or writes building codes with volcanoes in mind. And even if you did, what then? Ash, sure, just build your roofs with a pitch of greater than 35 degrees to shed the stuff. But lava? Maybe … round buildings? According to one of the few analyses of such things, a forensic look at a 2014 eruption of the Fogo volcano on Cape Verde, lava pushes them into compression, actually strengthening them; it tends to just push over flat walls.

Sometimes the volcano is quiet; sometimes it’s not. “Pele, the goddess of Hawaiian volcanoes, whose home is in Halema‘uma‘u Crater within Kilauea Caldera, is always described with two personas,” young and beautiful—and old and cruel, write James Kauahikaua and Robert Tilling, two past heads of the Hawaiian Volcano Observatory.

Now, the observatory is warning that things could get worse. A rapid lowering of the lava level in the Overlook crater at Kilauea’s summit was the first sign that lava was on the move. If that lava dips below the groundwater level, it could start making steam, converting this to an explosive eruption, scientists warned at a press conference. The Washington Post reports that a nearby geothermal power plant is moving 12,000 gallons of a flammable fuel called pentane to an industrial park that’s out of range, just to be safe.

But in the face of the threat, people’s attitudes toward volcanoes aren’t much different from how they feel about other hazards. Deligne loves volcanoes; she says she can’t imagine living anywhere there might be tornadoes. Lindell says if he had to live on the Big Island, he’d definitely try to stay on the north side—away from the volcanoes. As for the south side? “It’s incredibly cheap to live there and it’s a very pleasant life, so it’s an acceptable risk to them,” he says. “In some respects it’s no different than people living on the Hayward fault, or on the flood plain in Houston. They know the risk is getting worse, but they keep on rebuilding.”