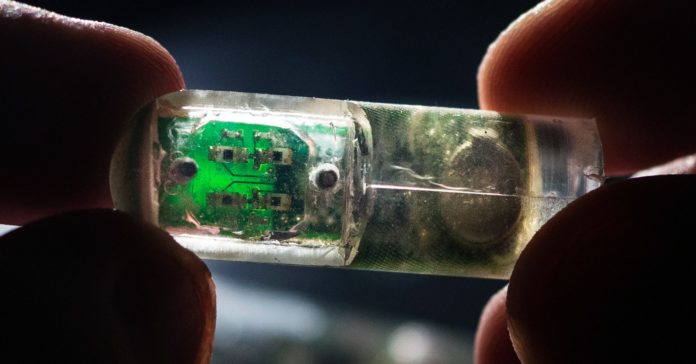 The human gut is a 30-foot-long black box. Well, black tube. For decades doctors have been trying to decode the dark, slimy terrains of the GI tract—probing both ends with cameras and scopes and liters of oral contrast liquid. But those medieval days may soon be behind us.

Ingestible sensors—pill-sized electronics that ping your smartphone with data after you pop and swallow—have started to arrive on the market. They don’t do much yet: Mostly they measure pH, temperature, and pressure or monitor whether or not patients have taken their meds. But researchers are cooking up novel sensing technologies to detect a much broader range of medical molecules.

Like say, cramming millions of genetically engineered glowing bacteria inside a AAA-battery-sized capsule to diagnose stomach bleeds—as demonstrated by scientists in Timothy Lu’s lab at MIT, in a study published Thursday in Science.

Bacteria, you see, are microscopic sensing machines. Take Lactococcus lactis, a friendly little microbe that helps turn milk into cheese. It can do its curdling work even better if there’s some heme floating around. That’s the iron-containing molecule that transports oxygen in your blood (and the Impossible Burger’s secret ingredient). But taking up too much heme can be toxic. So the little buggers have a system to sense how much there is, complete with genetic switches to change up their metabolism.

Lu’s team took L. lactis’s on-switch DNA, coupled it with some code for bacterial bioluminescence, and stuck the whole genetic circuit inside a gut-friendly strain of E. coli commonly sold as a probiotic. Those modified cells went into a body-safe capsule equipped with a semipermeable membrane on one side to let in liquid from the gut. Wireless semiconductors powered by a teeny battery were packed in the capsule too—separated from the cells by a tiny see-through window.

The scientists tested their bacteria-on-a-chip prototype in mice with induced gastrointestinal bleeding and in pigs that had blood piped into their stomachs. When the bacteria hit the heme, they lit up. Not much, but enough for a custom phototransistor to capture it and relay that information to a microprocessor—which sent the signal to an Android app developed by an undergraduate engineering student.

Before they move to testing in humans, the team wants to squeeze the pill down to about a third its current volume. At an inch and a half, “someone would have to be pretty motivated to swallow it,” says Lu. They plan to do that by getting all the different electronic components—detection, processing, transmitting—onto a single chip. That would also help them shrink the battery or even eliminate it. The current version requires 13 microwatts of power, which could potentially be provided by a voltaic cell—developed by Nadeau—that runs on acidic stomach juices.

These kinds of innovations will be key to making gut-sensing tech a reality. “The main bottleneck in the field is power supply,” says Pietro Valdastri, a roboticist at the University of Leeds who was not involved in the study and is developing a magnetically-guided colonoscopy robot. “However, with rapid advances in battery technology, we may see wireless medical capsule robots able to measure physiological parameters and interact with tissue in the next five to 10 years.”

But of course there are all the other hurdles too, like passing regulatory muster and getting insurers to cover the mini medical devices. Earlier this year the Centers for Medicare & Medicaid Services made it possible for doctors to bill for reviewing digital health data—like the kind that would stream from a swallowable sensor—without the patient having to come into the clinic. But that kind of work often isn’t covered by copays yet, so many doctors are still hesitant to adopt the tech for fear of angering patients.

That’s what Proteus Digital Health is dealing with these days. The California-based health tech company recently won FDA approval to sell its drug-sensor-app system for ensuring people with schizophrenia take their antipsychotics, and plans to expand soon into cancer, HIV, and hepatitis C. Proteus began testing its device in humans in 2008 (it pinged data to a Blackberry!), but because the pill-plus-sensor combo was so new, it took years of working with the FDA to even figure out what kind of data to submit to get approval.

“Medical devices are defined by their functions of diagnosing or treating a medical condition,” says George Savage, Proteus’s cofounder and chief medical officer. “The FDA didn’t know what to do with something that just gets wet and sends out a number.”

The agency has changed a lot since then, establishing a new digital health team to chart a more flexible regulatory framework for software and connected devices. Which should make it easier for the coming wave of ingestibles—which promise to do everything from sensing cancerous DNA to reading out the microbes in your gut based on the gases they produce—to become part of a regular routine, just like taking a vitamin. If anyone has doubts about that, it’s worth considering that federal regulators just asked Proteus to send over some samples of its first product. Not for review, but to display in the FDA museum.

Apple Unveils iPad Mini – Here’s Everything You Need To Know