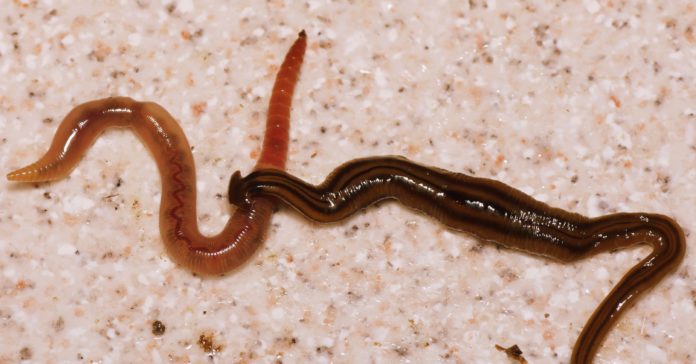 If I told you that flatworms had invaded France, you might say, c’est la vie. A worm is a worm, after all. But then I’d tell you they’re also known as land planarians, and you might think that sounds rather more alien. Then I’d say they’re also called hammerhead flatworms, and you might start getting nervous. Oh, and they grow to a foot long and release secretions from their hammerheads that glue them to their native French prey, the innocent little earthworms. Mon dieu!

Endangered species have their charismatic megafauna—charming critters like pandas and elephants that operate as ambassadors of sorts, drawing attention to the cause of conservation. We might say, then, that the hammerhead flatworm is a new class of indicator species: the inconvenient minifauna. This particularly conspicuous infiltrator is a creature that, based on the amount of media attention it’s getting, might work to bring attention to a oftentimes quiet crisis: The upending of ecosystems by invasive species.

In this era of global commerce and tourism, species have found lots of ways to get where they don’t belong. The hammerhead flatworms, for instance, may have hitchhiked on imported plants, according to a new study’s authors. Perhaps the most prolific invaders, rats, stow away on ships and hop off on islands, where they decimate bird species in particular by eating eggs. And sometimes silly humans will deliberately import invasive species (see: the foot-long giant African land snail was brought to Florida to take part in bizarre religious rituals. Like ya do.)

Which is not to say these species are inherently loathsome—only when we put them where they don’t belong do they become problematic. And it’s not that species changing neighborhoods can’t be perfectly natural. Life didn’t cover planet earth by hunkering down. But humans are introducing them to new territories in astonishing numbers.

“The rate of movement of plants and animals to wholly different parts of the world and across major geographic barriers like deserts and mountain chains and oceans is really the context changer,” says John Randall, lead scientist of the lands program at the Nature Conservancy California Chapter. “The rate of these changes from an ecologist’s point of view is convulsive. It’s just one after the other after the other.”

The problem with invasive species isn’t just the ease with which they spread, but the difficulty and expense in eradicating them. You can pretty much forget about France being able to do anything about the hammerhead flatworms. (Their full ecological impact is not yet known, but the fact that they’re giant and hungry and prey on earthworms, which famously process soil, is not a good sign.) People have found them across the country, not in, say, an isolated valley that officials could quarantine.

Now, inconvenient minifauna aren’t the only way to draw attention to the plight of an invaded ecosystem. Take the saga of the foxes of Santa Cruz Island, off the coast of Southern California. In the mid-1800s, ranchers arrived with pigs, which attracted golden eagles from the mainland. But the eagles soon turned on the native foxes, which are smaller than cats, until fewer than 100 foxes were left.

So the Nature Conservancy stepped in with a $5 million war on pigs—the inconvenient pigs. Hunters shot the creatures from helicopters, which wasn’t as easy as it sounds. “They learned very quickly that hunters are bad news,” says Randall. “And if they associate helicopter noise with the death of other pigs around them they will scram.” But after a little over a year, every pig had been removed from Santa Cruz Island. And soon, the charismatic, troubled little foxes bounced back. So villainizing an inconvenient megafauna helped save a species.

Sometimes, having a charismatic invader can help too, in its own weird way. “When we’re discussing improvements in quarantine, or the need for funds to attempt to eradicate a new invader or to control it to prevent its spread, often the examples that will be used will be the ones that are charismatic,” says Randall.

Take the lionfish, a voracious predator that’s also a popular aquarium fish. When people don’t want them anymore, they dump them in the sea, so now the things have conquered the coasts of Florida and Georgia and the Carolinas, competing for food with native fish.

“It’s such a spectacular looking fish,” says Randall. “So something like that really catches the eye and it has an emotional impact.” And indeed, the people seem to have taken notice of this charismatic-yet-troublesome minifauna—think of them like the popular kids in high school. Florida launched a bounty program in 2016. National Geographic even has a guide for hunting them, though no amount of hunting has broken their widespread invasion.

But the lionfish and the Santa Cruz Island pigs show that invasive fauna of all sizes can get a rise out of humans, just as charismatic megafauna work for the cause of endangered species of all kinds. Amid an epidemic of invasive species, it’s badly needed awareness.

“It’s not going to stop, so there will be more invasions,” says Randall. “But I think we could do a far better job of preventing some of those new invasions.” More diligent inspecting and treating of imported wood products like pallets, for example, that can harbor pests.

So no, inconvenient minifauna aren’t going to fix this unfixable problem. But they could get infamous for their cause and help reveal the global destruction our species has wrought, rallying conservationists and the public alike.

GizmoCrazed - September 15, 2016 0
Patients from The University of Texas MD Anderson Cancer Center in Houston will have the opportunity to speak with a NASA astronaut currently living...

Automakers accelerate their interest in startups

Human-Powered Helicopter ‘Gamera II’ Back To The Skies